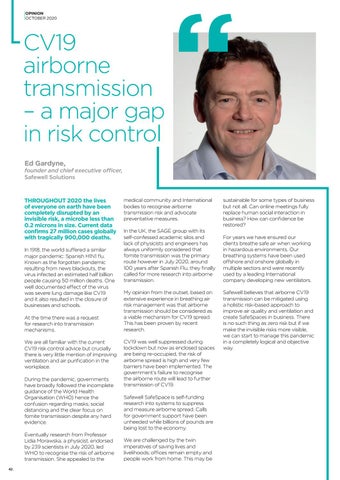 THROUGHOUT 2020 the lives of everyone on earth have been completely disrupted by an invisible risk, a microbe less than 0.2 microns in size. Current data confirms 27 million cases globally with tragically 900,000 deaths. In 1918, the world suffered a similar major pandemic: Spanish H1N1 flu. Known as the forgotten pandemic resulting from news blackouts, the virus infected an estimated half billion people causing 50 million deaths. One well documented effect of the virus was severe lung damage like CV19 and it also resulted in the closure of businesses and schools. At the time there was a request for research into transmission mechanisms. We are all familiar with the current CV19 risk control advice but crucially there is very little mention of improving ventilation and air purification in the workplace. During the pandemic, governments have broadly followed the incomplete guidance of the World Health Organisation (WHO) hence the confusion regarding masks, social distancing and the clear focus on fomite transmission despite any hard evidence. Eventually research from Professor Lidia Morawska, a physicist, endorsed by 239 scientists in July 2020, led WHO to recognise the risk of airborne transmission. She appealed to the 42.

medical community and International bodies to recognise airborne transmission risk and advocate preventative measures. In the UK, the SAGE group with its self-confessed academic silos and lack of physicists and engineers has always uniformly considered that fomite transmission was the primary route however in July 2020, around 100 years after Spanish Flu, they finally called for more research into airborne transmission. My opinion from the outset, based on extensive experience in breathing air risk management was that airborne transmission should be considered as a viable mechanism for CV19 spread. This has been proven by recent research. CV19 was well suppressed during lockdown but now as enclosed spaces are being re-occupied, the risk of airborne spread is high and very few barriers have been implemented. The governmentâ&#x20AC;&#x2122;s failure to recognise the airborne route will lead to further transmission of CV19. Safewell SafeSpace is self-funding research into systems to suppress and measure airborne spread. Calls for government support have been unheeded while billions of pounds are being lost to the economy. We are challenged by the twin imperatives of saving lives and livelihoods; offices remain empty and people work from home. This may be

sustainable for some types of business but not all. Can online meetings fully replace human social interaction in business? How can confidence be restored? For years we have ensured our clients breathe safe air when working in hazardous environments. Our breathing systems have been used offshore and onshore globally in multiple sectors and were recently used by a leading International company developing new ventilators. Safewell believes that airborne CV19 transmission can be mitigated using a holistic risk-based approach to improve air quality and ventilation and create SafeSpaces in business. There is no such thing as zero risk but if we make the invisible risks more visible, we can start to manage this pandemic in a completely logical and objective way. 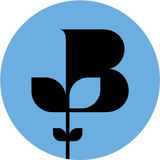 We explore transition in this month's Business Bulletin and look at the game changers in the industries around us.

We explore transition in this month's Business Bulletin and look at the game changers in the industries around us.