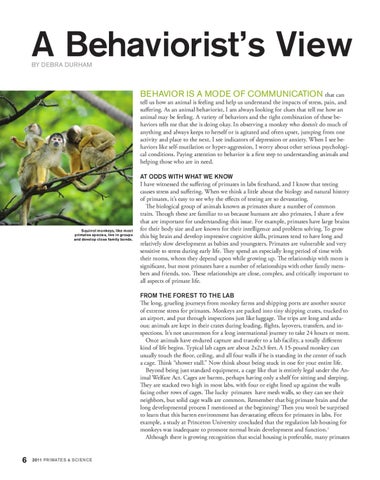 A Behaviorist’s View BY DEBRA DURHAM

BEHAVIOR IS A MODE OF COMMUNICATION that can

tell us how an animal is feeling and help us understand the impacts of stress, pain, and suffering. As an animal behaviorist, I am always looking for clues that tell me how an animal may be feeling. A variety of behaviors and the right combination of these behaviors tells me that she is doing okay. In observing a monkey who doesn’t do much of anything and always keeps to herself or is agitated and often upset, jumping from one activity and place to the next, I see indicators of depression or anxiety. When I see behaviors like self-mutilation or hyper-aggression, I worry about other serious psychological conditions. Paying attention to behavior is a first step to understanding animals and helping those who are in need.

AT ODDS WITH WHAT WE KNOW I have witnessed the suffering of primates in labs firsthand, and I know that testing causes stress and suffering. When we think a little about the biology and natural history of primates, it’s easy to see why the effects of testing are so devastating. The biological group of animals known as primates share a number of common traits. Though these are familiar to us because humans are also primates, I share a few that are important for understanding this issue. For example, primates have large brains for their body size and are known for their intelligence and problem solving. To grow this big brain and develop impressive cognitive skills, primates tend to have long and relatively slow development as babies and youngsters. Primates are vulnerable and very sensitive to stress during early life. They spend an especially long period of time with their moms, whom they depend upon while growing up. The relationship with mom is significant, but most primates have a number of relationships with other family members and friends, too. These relationships are close, complex, and critically important to all aspects of primate life. FROM THE FOREST TO THE LAB The long, grueling journeys from monkey farms and shipping ports are another source of extreme stress for primates. Monkeys are packed into tiny shipping crates, trucked to an airport, and put through inspections just like luggage. The trips are long and arduous; animals are kept in their crates during loading, flights, layovers, transfers, and inspections. It’s not uncommon for a long international journey to take 24 hours or more. Once animals have endured capture and transfer to a lab facility, a totally different kind of life begins. Typical lab cages are about 2x2x3 feet. A 15-pound monkey can usually touch the floor, ceiling, and all four walls if he is standing in the center of such a cage. Think “shower stall.” Now think about being stuck in one for your entire life. Beyond being just standard equipment, a cage like that is entirely legal under the Animal Welfare Act. Cages are barren, perhaps having only a shelf for sitting and sleeping. They are stacked two high in most labs, with four or eight lined up against the walls facing other rows of cages. The lucky primates have mesh walls, so they can see their neighbors, but solid cage walls are common. Remember that big primate brain and the long developmental process I mentioned at the beginning? Then you won’t be surprised to learn that this barren environment has devastating effects for primates in labs. For example, a study at Princeton University concluded that the regulation lab housing for monkeys was inadequate to promote normal brain development and function.1 Although there is growing recognition that social housing is preferable, many primates