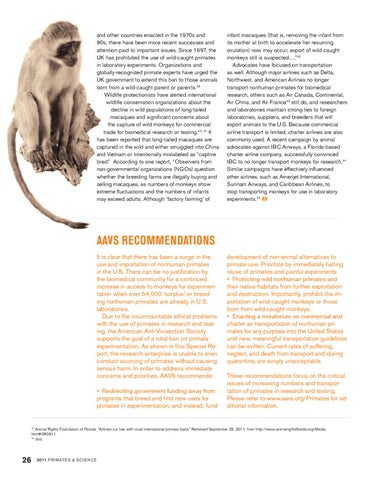 and other countries enacted in the 1970s and 80s, there have been more recent successes and attention paid to important issues. Since 1997, the UK has prohibited the use of wild-caught primates in laboratory experiments. Organizations and globally-recognized primate experts have urged the UK government to extend this ban to those animals born from a wild-caught parent or parents.39 Wildlife protectionists have alerted international wildlife conservation organizations about the decline in wild populations of long-tailed macaques and significant concerns about the capture of wild monkeys for commercial trade for biomedical research or testing.40, 41 It has been reported that long-tailed macaques are captured in the wild and either smuggled into China and Vietnam or intentionally mislabeled as “captive bred.” According to one report, “Observers from non-governmental organizations (NGOs) question whether the breeding farms are illegally buying and selling macaques, as numbers of monkeys show extreme fluctuations and the numbers of infants may exceed adults. Although ‘factory farming’ of

infant macaques (that is, removing the infant from its mother at birth to accelerate her resuming ovulation) now may occur, export of wild-caught monkeys still is suspected….”42 Advocates have focused on transportation as well. Although major airlines such as Delta, Northwest, and American Airlines no longer transport nonhuman primates for biomedical research, others such as Air Canada, Continental, Air China, and Air France43 still do, and researchers and laboratories maintain strong ties to foreign laboratories, suppliers, and breeders that will export animals to the U.S. Because commercial airline transport is limited, charter airlines are also commonly used. A recent campaign by animal advocates against IBC Airways, a Florida-based charter airline company, successfully convinced IBC to no longer transport monkeys for research.44 Similar campaigns have effectively influenced other airlines, such as Amerijet International, Surinam Airways, and Caribbean Airlines, to stop transporting monkeys for use in laboratory experiments.45 AV

AAVS RECOMMENDATIONS It is clear that there has been a surge in the use and importation of nonhuman primates in the U.S. There can be no justification by the biomedical community for a continued increase in access to monkeys for experimentation when over 54,000 ‘surplus’ or breeding nonhuman primates are already in U.S. laboratories. Due to the insurmountable ethical problems with the use of primates in research and testing, the American Anti-Vivisection Society supports the goal of a total ban on primate experimentation. As shown in this Special Report, the research enterprise is unable to even conduct sourcing of primates without causing serious harm. In order to address immediate concerns and priorities, AAVS recommends: • Redirecting government funding away from programs that breed and find new uses for primates in experimentation, and instead, fund

development of non-animal alternatives to primate use. Prioritize by immediately halting reuse of primates and painful experiments. • Protecting wild nonhuman primates and their native habitats from further exploitation and destruction. Importantly, prohibit the importation of wild-caught monkeys or those born from wild-caught monkeys. • Enacting a moratorium on commercial and charter air transportation of nonhuman primates for any purpose into the United States until new, meaningful transportation guidelines can be written. Current rates of suffering, neglect, and death from transport and during quarantine, are simply unacceptable. These recommendations focus on the critical issues of increasing numbers and transportation of primates in research and testing. Please refer to www.aavs.org/Primates for additional information.