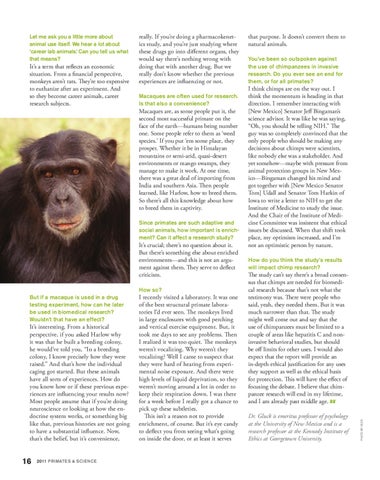 It’s a term that reflects an economic situation. From a financial perspective, monkeys aren’t rats. They’re too expensive to euthanize after an experiment. And so they become career animals, career research subjects.

really. If you’re doing a pharmacokenetics study, and you’re just studying where these drugs go into different organs, they would say there’s nothing wrong with doing that with another drug. But we really don’t know whether the previous experiences are influencing or not. Macaques are often used for research. Is that also a convenience?

Macaques are, as some people put it, the second most successful primate on the face of the earth—humans being number one. Some people refer to them as ‘weed species.’ If you put ‘em some place, they prosper. Whether it be in Himalayan mountains or semi-arid, quasi-desert environments or mango swamps, they manage to make it work. At one time, there was a great deal of importing from India and southern Asia. Then people learned, like Harlow, how to breed them. So there’s all this knowledge about how to breed them in captivity. Since primates are such adaptive and social animals, how important is enrichment? Can it affect a research study?

It’s crucial; there’s no question about it. But there’s something else about enriched environments—and this is not an argument against them. They serve to deflect criticism. How so? But if a macaque is used in a drug testing experiment, how can he later be used in biomedical research? Wouldn’t that have an effect?

It’s interesting. From a historical perspective, if you asked Harlow why it was that he built a breeding colony, he would’ve told you, “In a breeding colony, I know precisely how they were raised.” And that’s how the individual caging got started. But these animals have all sorts of experiences. How do you know how or if these previous experiences are influencing your results now? Most people assume that if you’re doing neuroscience or looking at how the endocrine system works, or something big like that, previous histories are not going to have a substantial influence. Now, that’s the belief, but it’s convenience,

I recently visited a laboratory. It was one of the best structural primate laboratories I’d ever seen. The monkeys lived in large enclosures with good perching and vertical exercise equipment. But, it took me days to see any problems. Then I realized it was too quiet. The monkeys weren’t vocalizing. Why weren’t they vocalizing? Well I came to suspect that they were hard of hearing from experimental noise exposure. And there were high levels of liquid deprivation, so they weren’t moving around a lot in order to keep their respiration down. I was there for a week before I really got a chance to pick up these subtleties. This isn’t a reason not to provide enrichment, of course. But it’s eye candy to deflect you from seeing what’s going on inside the door, or at least it serves

that purpose. It doesn’t convert them to natural animals. You’ve been so outspoken against the use of chimpanzees in invasive research. Do you ever see an end for them, or for all primates?

I think chimps are on the way out. I think the momentum is heading in that direction. I remember interacting with [New Mexico] Senator Jeff Bingaman’s science advisor. It was like he was saying, “Oh, you should be telling NIH.” The guy was so completely convinced that the only people who should be making any decisions about chimps were scientists, like nobody else was a stakeholder. And yet somehow—maybe with pressure from animal protection groups in New Mexico—Bingaman changed his mind and got together with [New Mexico Senator Tom] Udall and Senator Tom Harkin of Iowa to write a letter to NIH to get the Institute of Medicine to study the issue. And the Chair of the Institute of Medicine Committee was insistent that ethical issues be discussed. When that shift took place, my optimism increased, and I’m not an optimistic person by nature. How do you think the study’s results will impact chimp research?

The study can’t say there’s a broad consensus that chimps are needed for biomedical research because that’s not what the testimony was. There were people who said, yeah, they needed them. But it was much narrower than that. The study might well come out and say that the use of chimpanzees must be limited to a couple of areas like hepatitis C and noninvasive behavioral studies, but should be off limits for other uses. I would also expect that the report will provide an in-depth ethical justification for any uses they support as well as the ethical basis for protection. This will have the effect of focusing the debate. I believe that chimpanzee research will end in my lifetime, and I am already past middle age. AV Dr. Gluck is emeritus professor of psychology at the University of New Mexico and is a research professor at the Kennedy Institute of Ethics at Georgetown University.

Let me ask you a little more about animal use itself. We hear a lot about ‘career lab animals.’ Can you tell us what that means?