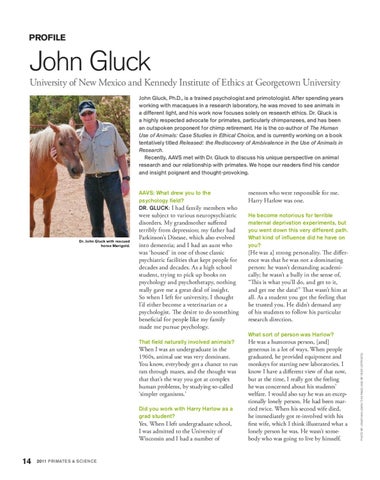 University of New Mexico and Kennedy Institute of Ethics at Georgetown University John Gluck, Ph.D., is a trained psychologist and primotologist. After spending years working with macaques in a research laboratory, he was moved to see animals in a different light, and his work now focuses solely on research ethics. Dr. Gluck is a highly respected advocate for primates, particularly chimpanzees, and has been an outspoken proponent for chimp retirement. He is the co-author of The Human Use of Animals: Case Studies in Ethical Choice, and is currently working on a book tentatively titled Released: the Rediscovery of Ambivalence in the Use of Animals in Research. Recently, AAVS met with Dr. Gluck to discuss his unique perspective on animal research and our relationship with primates. We hope our readers find his candor and insight poignant and thought-provoking.

were subject to various neuropsychiatric disorders. My grandmother suffered terribly from depression; my father had Parkinson’s Disease, which also evolved into dementia; and I had an aunt who was ‘housed’ in one of those classic psychiatric facilities that kept people for decades and decades. As a high school student, trying to pick up books on psychology and psychotherapy, nothing really gave me a great deal of insight. So when I left for university, I thought I’d either become a veterinarian or a psychologist. The desire to do something beneficial for people like my family made me pursue psychology.

He become notorious for terrible maternal deprivation experiments, but you went down this very different path. What kind of influence did he have on you?

He was a humorous person, [and] generous in a lot of ways. When people graduated, he provided equipment and monkeys for starting new laboratories. I know I have a different view of that now, but at the time, I really got the feeling he was concerned about his students’ welfare. I would also say he was an exceptionally lonely person. He had been married twice. When his second wife died, he immediately got re-involved with his first wife, which I think illustrated what a lonely person he was. He wasn’t somebody who was going to live by himself.

When I was an undergraduate in the 1960s, animal use was very dominant. You know, everybody got a chance to run rats through mazes, and the thought was that that’s the way you got at complex human problems, by studying so-called ‘simpler organisms.’ Did you work with Harry Harlow as a grad student?

Yes. When I left undergraduate school, I was admitted to the University of Wisconsin and I had a number of

mentors who were responsible for me. Harry Harlow was one.

[He was a] strong personality. The difference was that he was not a dominating person: he wasn’t demanding academically; he wasn’t a bully in the sense of, “This is what you’ll do, and get to it, and get me the data!” That wasn’t him at all. As a student you got the feeling that he trusted you. He didn’t demand any of his students to follow his particular research direction. What sort of person was Harlow?

PHOTO BY JONATHAN LEWIS (THIS PAGE) AND BY VEER (OPPOSITE)

AAVS: What drew you to the psychology field? DR. GLUCK: I had family members who