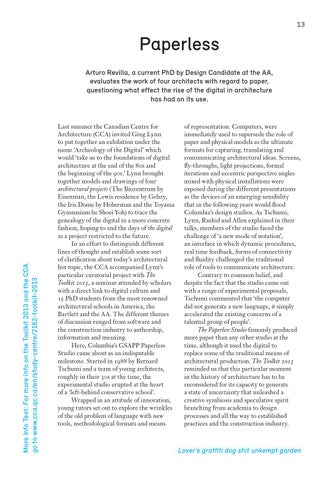 Arturo Revilla, a current PhD by Design Candidate at the AA, evaluates the work of four architects with regard to paper, questioning what effect the rise of the digital in architecture has had on its use.

Last summer the Canadian Centre for Architecture (CCA) invited Greg Lynn to put together an exhibition under the name ‘Archeology of the Digital’ which would ‘take us to the foundations of digital architecture at the end of the 80s and the beginning of the 90s.’ Lynn brought together models and drawings of four architectural projects (The Biozentrum by Eisenman, the Lewis residence by Gehry, the Iris Dome by Hoberman and the Toyama Gymnasium be Shoei Yoh) to trace the genealogy of the digital in a more concrete fashion, hoping to end the days of the digital as a project restricted to the future. In an effort to distinguish different lines of thought and establish some sort of clarification about today’s architectural hot topic, the CCA accompanied Lynn’s particular curatorial project with The Toolkit 2013, a seminar attended by scholars with a direct link to digital culture and 15 PhD students from the most renowned architectural schools in America, the Bartlett and the AA. The different themes of discussion ranged from software and the construction industry to authorship, information and meaning. Here, Columbia’s GSAPP Paperless Studio came about as an indisputable milestone. Started in 1988 by Bernard Tschumi and a team of young architects, roughly in their 30s at the time, the experimental studio erupted at the heart of a ‘left-behind conservative school’. Wrapped in an attitude of innovation, young tutors set out to explore the wrinkles of the old problem of language with new tools, methodological formats and means

of representation. Computers, were immediately used to supersede the role of paper and physical models as the ultimate formats for capturing, translating and communicating architectural ideas. Screens, fly-throughs, light projections, formal iterations and eccentric perspective angles mixed with physical installations were exposed during the different presentations as the devices of an emerging sensibility that in the following years would flood Columbia’s design studios. As Tschumi, Lynn, Rashid and Allen explained in their talks, members of the studio faced the challenge of ‘a new mode of notation’, an interface in which dynamic procedures, real time feedback, forms of connectivity and fluidity challenged the traditional role of tools to communicate architecture. Contrary to common belief, and despite the fact that the studio came out with a range of experimental proposals, Tschumi commented that ‘the computer did not generate a new language, it simply accelerated the existing concerns of a talented group of people’. The Paperless Studio famously produced more paper than any other studio at the time, although it used the digital to replace some of the traditional means of architectural production. The Toolkit 2013 reminded us that this particular moment in the history of architecture has to be reconsidered for its capacity to generate a state of uncertainty that unleashed a creative symbiosis and speculative spirit branching from academia to design processes and all the way to established practices and the construction industry.