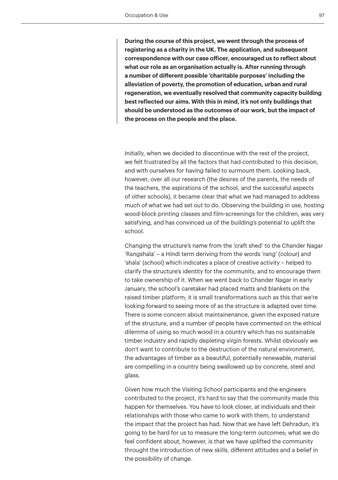 During the course of this project, we went through the process of registering as a charity in the UK. The application, and subsequent correspondence with our case officer, encouraged us to reflect about what our role as an organisation actually is. After running through a number of different possible ‘charitable purposes’ including the alleviation of poverty, the promotion of education, urban and rural regeneration, we eventually resolved that community capacity building best reflected our aims. With this in mind, it’s not only buildings that should be understood as the outcomes of our work, but the impact of the process on the people and the place.

Initially, when we decided to discontinue with the rest of the project, we felt frustrated by all the factors that had contributed to this decision, and with ourselves for having failed to surmount them. Looking back, however, over all our research (the desires of the parents, the needs of the teachers, the aspirations of the school, and the successful aspects of other schools), it became clear that what we had managed to address much of what we had set out to do. Observing the building in use, hosting wood-block printing classes and film-screenings for the children, was very satisfying, and has convinced us of the building’s potential to uplift the school. Changing the structure’s name from the ‘craft shed’ to the Chander Nagar ‘Rangshala’ – a Hindi term deriving from the words ‘rang’ (colour) and ‘shala’ (school) which indicates a place of creative activity – helped to clarify the structure’s identity for the community, and to encourage them to take ownership of it. When we went back to Chander Nagar in early January, the school’s caretaker had placed matts and blankets on the raised timber platform; it is small transformations such as this that we’re looking forward to seeing more of as the structure is adapted over time. There is some concern about maintainenance, given the exposed nature of the structure, and a number of people have commented on the ethical dilemma of using so much wood in a country which has no sustainable timber industry and rapidly depleting virgin forests. Whilst obviously we don’t want to contribute to the destruction of the natural environment, the advantages of timber as a beautiful, potentially renewable, material are compelling in a country being swallowed up by concrete, steel and glass. Given how much the Visiting School participants and the engineers contributed to the project, it’s hard to say that the community made this happen for themselves. You have to look closer, at individuals and their relationships with those who came to work with them, to understand the impact that the project has had. Now that we have left Dehradun, it’s going to be hard for us to measure the long-term outcomes; what we do feel confident about, however, is that we have uplifted the community throught the introduction of new skills, different attitudes and a belief in the possibility of change.

WORKSHOP architecture is a non-profit design/make studio that focuses on collaboration, learning by doing, and cultivating deep understanding of place. Living temporarily with the communities we are working with, we bring new ideas whilst engaging in local building crafts and materials, to bring about an architecture of exchange that is both challenging and pragmatic. Project Chander Nagar was built through the AA Visiting School.