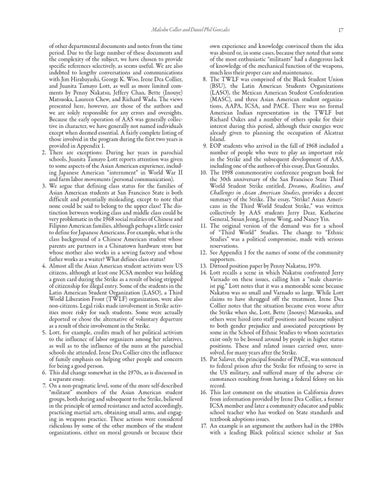 of other departmental documents and notes from the time period. Due to the large number of these documents and the complexity of the subject, we have chosen to provide specific references selectively, as seems useful. We are also indebted to lengthy conversations and communications with Jim Hirabayashi, George K. Woo, Irene Dea Collier, and Juanita Tamayo Lott, as well as more limited comments by Penny Nakatsu, Jeffery Chan, Bette (Inouye) Matsuoka, Laureen Chew, and Richard Wada. The views presented here, however, are those of the authors and we are solely responsible for any errors and oversights. Because the early operation of AAS was generally collective in character, we have generally not named individuals except when deemed essential. A fairly complete listing of those involved in the program during the first two years is provided in Appendix 1. There are exceptions: During her years in parochial schools, Juanita Tamayo Lott reports attention was given to some aspects of the Asian American experience, including Japanese American “internment” in World War II and farm labor movements (personal communication). We argue that defining class status for the families of Asian American students at San Francisco State is both difficult and potentially misleading, except to note that none could be said to belong to the upper class! The distinction between working class and middle class could be very problematic in the 1968 social realities of Chinese and Filipino American families, although perhaps a little easier to define for Japanese Americans. For example, what is the class background of a Chinese American student whose parents are partners in a Chinatown hardware store but whose mother also works in a sewing factory and whose father works as a waiter? What defines class status? Almost all the Asian American student activists were US citizens, although at least one ICSA member was holding a green card during the Strike as a result of being stripped of citizenship for illegal entry. Some of the students in the Latin American Student Organization (LASO), a Third World Liberation Front (TWLF) organization, were also non-citizens. Legal risks made involvement in Strike activities more risky for such students. Some were actually deported or chose the alternative of voluntary departure as a result of their involvement in the Strike. Lott, for example, credits much of her political activism to the influence of labor organizers among her relatives, as well as to the influence of the nuns at the parochial schools she attended. Irene Dea Collier cites the influence of family emphasis on helping other people and concern for being a good person. This did change somewhat in the 1970s, as is discussed in a separate essay. On a non-pragmatic level, some of the more self-described “militant” members of the Asian American student groups, both during and subsequent to the Strike, believed in the principle of armed resistance and acted accordingly, practicing martial arts, obtaining small arms, and engaging in weapons practice. These actions were considered ridiculous by some of the other members of the student organizations, either on moral grounds or because their

own experience and knowledge convinced them the idea was absurd or, in some cases, because they noted that some of the most enthusiastic “militants” had a dangerous lack of knowledge of the mechanical function of the weapons, much less their proper care and maintenance. The TWLF was comprised of the Black Student Union (BSU), the Latin American Students Organizations (LASO), the Mexican American Student Confederation (MASC), and three Asian American student organizations, AAPA, ICSA, and PACE. There was no formal American Indian representation in the TWLF but Richard Oakes and a number of others spoke for their interest during this period, although their energies were already given to planning the occupation of Alcatraz Island. EOP students who arrived in the fall of 1968 included a number of people who were to play an important role in the Strike and the subsequent development of AAS, including one of the authors of this essay, Dan Gonzales. The 1998 commemorative conference program book for the 30th anniversary of the San Francisco State Third World Student Strike entitled, Dreams, Realities, and Challenges in Asian American Studies, provides a decent summary of the Strike. The essay, “Strike! Asian Americans in the Third World Student Strike,” was written collectively by AAS students Jerry Dear, Katherine General, Susan Jeong, Lynne Wong, and Nancy Yin. The original version of the demand was for a school of “Third World” Studies. The change to “Ethnic Studies” was a political compromise, made with serious reservations. See Appendix 1 for the names of some of the community supporters. Dittoed position paper by Penny Nakatsu, 1970. Lott recalls a scene in which Nakatsu confronted Jerry Varnado on these issues, calling him a “male chauvinist pig.” Lott notes that it was a memorable scene because Nakatsu was so small and Varnado so large. While Lott claims to have shrugged off the treatment, Irene Dea Collier notes that the situation became even worse after the Strike when she, Lott, Bette (Inouye) Matsuoka, and others were hired into staff positions and became subject to both gender prejudice and associated perceptions by some in the School of Ethnic Studies to whom secretaries exist only to be bossed around by people in higher status positions. These and related issues carried over, unresolved, for many years after the Strike. Pat Salaver, the principal founder of PACE, was sentenced to federal prison after the Strike for refusing to serve in the US military, and suffered many of the adverse circumstances resulting from having a federal felony on his record. This last comment on the situation in California draws from information provided by Irene Dea Collier, a former ICSA member and later a community educator and public school teacher who has worked on State standards and textbook adoptions issues. An example is an argument the authors had in the 1980s with a leading Black political science scholar at San 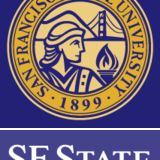