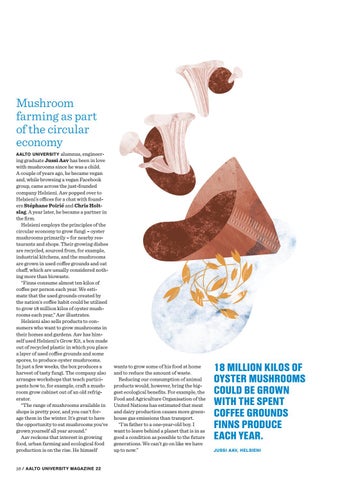 ing graduate Jussi Aav has been in love with mushrooms since he was a child. A couple of years ago, he became vegan and, while browsing a vegan Facebook group, came across the just-founded company Helsieni. Aav popped over to Helsieni’s offices for a chat with founders Stéphane Poirié and Chris Holtslag. A year later, he became a partner in the firm. Helsieni employs the principles of the circular economy to grow fungi – oyster mushrooms primarily – for nearby restaurants and shops. Their growing dishes are recycled, sourced from, for example, industrial kitchens, and the mushrooms are grown in used coffee grounds and oat chaff, which are usually considered nothing more than biowaste. “Finns consume almost ten kilos of coffee per person each year. We estimate that the used grounds created by the nation’s coffee habit could be utilised to grow 18 million kilos of oyster mushrooms each year,” Aav illustrates. Helsieni also sells products to consumers who want to grow mushrooms in their homes and gardens. Aav has himself used Helsieni’s Grow Kit, a box made out of recycled plastic in which you place a layer of used coffee grounds and some spores, to produce oyster mushrooms. In just a few weeks, the box produces a harvest of tasty fungi. The company also arranges workshops that teach participants how to, for example, craft a mushroom grow cabinet out of an old refrigerator. “The range of mushrooms available in shops is pretty poor, and you can’t forage them in the winter. It’s great to have the opportunity to eat mushrooms you’ve grown yourself all year around.” Aav reckons that interest in growing food, urban farming and ecological food production is on the rise. He himself 38 / AALTO UNIVERSITY MAGAZINE 22

wants to grow some of his food at home and to reduce the amount of waste. Reducing our consumption of animal products would, however, bring the biggest ecological benefits. For example, the Food and Agriculture Organisation of the United Nations has estimated that meat and dairy production causes more greenhouse gas emissions than transport. “I’m father to a one-year-old boy. I want to leave behind a planet that is in as good a condition as possible to the future generations. We can’t go on like we have up to now.”

18 MILLION KILOS OF OYSTER MUSHROOMS COULD BE GROWN WITH THE SPENT COFFEE GROUNDS FINNS PRODUCE EACH YEAR. JUSSI AAV, HELSIENI