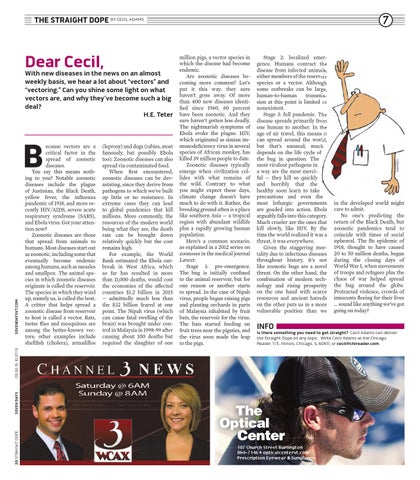 THE STRAIGHT DOPE BY CECIL ADAMS

With new diseases in the news on an almost weekly basis, we hear a lot about “vectors” and “vectoring.” Can you shine some light on what vectors are, and why they’ve become such a big deal? H.E. Teter

in the developed world might care to admit. No one’s predicting the return of the Black Death, but zoonotic pandemics tend to coincide with times of social upheaval. The flu epidemic of 1918, thought to have caused 20 to 50 million deaths, began during the closing days of World War I, when movements of troops and refugees plus the chaos of war helped spread the bug around the globe. Protracted violence, crowds of innocents fleeing for their lives … sound like anything we’ve got going on today?

Is there something you need to get straight? Cecil Adams can deliver the Straight Dope on any topic. Write Cecil Adams at the Chicago Reader, 11 E. Illinois, Chicago, IL 60611, or cecil@chireader.com.

(leprosy) and dogs (rabies, most famously, but possibly Ebola too). Zoonotic diseases can also spread via contaminated food. When first encountered, zoonotic diseases can be devastating, since they derive from pathogens to which we’ve built up little or no resistance. In extreme cases they can lead to global pandemics that kill millions. More commonly, the resources of the modern world being what they are, the death rate can be brought down relatively quickly but the cost remains high. For example, the World Bank estimated the Ebola outbreak in West Africa, which so far has resulted in more than 11,000 deaths, would cost the economies of the affected countries $1.2 billion in 2015 — admittedly much less than the $32 billion feared at one point. The Nipah virus (which can cause fatal swelling of the brain) was brought under control in Malaysia in 1998-99 after causing about 100 deaths but required the slaughter of one

Stage 2: localized emergence. Humans contract the disease from infected animals, either members of the reservoir species or a vector. Although some outbreaks can be large, human-to-human transmission at this point is limited or nonexistent. Stage 3: full pandemic. The disease spreads primarily from one human to another. In the age of air travel, this means it can spread around the world, but that’s unusual; much depends on the life cycle of the bug in question. The most virulent pathogens in a way are the most merciful — they kill so quickly and horribly that the healthy soon learn to take precautions and even the most lethargic governments are goaded into action. Ebola arguably falls into this category. Much crueler are the ones that kill slowly, like HIV. By the time the world realized it was a threat, it was everywhere. Given the staggering mortality due to infectious diseases throughout history, it’s not like zoonotic bugs are a novel threat. On the other hand, the combination of modern technology and rising prosperity on the one hand with scarce resources and ancient hatreds on the other puts us in a more vulnerable position than we

ecause vectors are a critical factor in the spread of zoonotic diseases. You say this means nothing to you? Notable zoonotic diseases include the plague of Justinian, the Black Death, yellow fever, the influenza pandemic of 1918, and more recently HIV/AIDS, severe acute respiratory syndrome (SARS), and Ebola virus. Got your attention now? Zoonotic diseases are those that spread from animals to humans. Most diseases start out as zoonotic, including some that eventually become endemic among humans, such as measles and smallpox. The animal species in which zoonotic diseases originate is called the reservoir. The species in which they wind up, namely us, is called the host. A critter that helps spread a zoonotic disease from reservoir to host is called a vector. Rats, tsetse flies and mosquitoes are among the better-known vectors; other examples include shellfish (cholera), armadillos

million pigs, a vector species in which the disease had become endemic. Are zoonotic diseases becoming more common? Let’s put it this way: they sure haven’t gone away. Of more than 400 new diseases identified since 1940, 60 percent have been zoonotic. And they sure haven’t gotten less deadly. The nightmarish symptoms of Ebola evoke the plague. HIV, which originated as simian immunodeficiency virus in several species of African monkey, has killed 39 million people to date. Zoonotic diseases typically emerge when civilization collides with what remains of the wild. Contrary to what you might expect these days, climate change doesn’t have much to do with it. Rather, the breeding ground often is a place like southern Asia — a tropical region with abundant wildlife plus a rapidly growing human population. Here’s a common scenario, as explained in a 2012 series on zoonoses in the medical journal Lancet: Stage 1: pre-emergence. The bug is initially confined to the animal reservoir, but for one reason or another starts to spread. In the case of Nipah virus, people began raising pigs and planting orchards in parts of Malaysia inhabited by fruit bats, the reservoir for the virus. The bats started feeding on fruit trees near the pigsties, and the virus soon made the leap to the pigs. 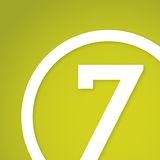