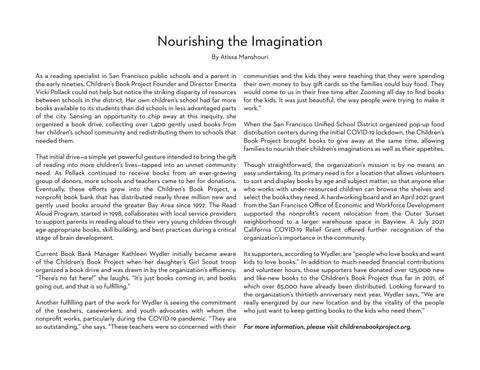 Nourishing the Imagination By Atissa Manshouri As a reading specialist in San Francisco public schools and a parent in the early nineties, Children’s Book Project Founder and Director Emerita Vicki Pollack could not help but notice the striking disparity of resources between schools in the district. Her own children’s school had far more books available to its students than did schools in less advantaged parts of the city. Sensing an opportunity to chip away at this inequity, she organized a book drive, collecting over 1,400 gently used books from her children’s school community and redistributing them to schools that needed them. That initial drive—a simple yet powerful gesture intended to bring the gift of reading into more children’s lives—tapped into an unmet community need. As Pollack continued to receive books from an ever-growing group of donors, more schools and teachers came to her for donations. Eventually, these efforts grew into the Children’s Book Project, a nonprofit book bank that has distributed nearly three million new and gently used books around the greater Bay Area since 1992. The Read Aloud Program, started in 1998, collaborates with local service providers to support parents in reading aloud to their very young children through age-appropriate books, skill building, and best practices during a critical stage of brain development. Current Book Bank Manager Kathleen Wydler initially became aware of the Children’s Book Project when her daughter’s Girl Scout troop organized a book drive and was drawn in by the organization’s efficiency. “There’s no fat here!” she laughs. “It’s just books coming in, and books going out, and that is so fulfilling.” Another fulfilling part of the work for Wydler is seeing the commitment of the teachers, caseworkers, and youth advocates with whom the nonprofit works, particularly during the COVID-19 pandemic. “They are so outstanding,” she says. “These teachers were so concerned with their

communities and the kids they were teaching that they were spending their own money to buy gift cards so the families could buy food. They would come to us in their free time after Zooming all day to find books for the kids. It was just beautiful, the way people were trying to make it work.” When the San Francisco Unified School District organized pop-up food distribution centers during the initial COVID-19 lockdown, the Children’s Book Project brought books to give away at the same time, allowing families to nourish their children’s imaginations as well as their appetites. Though straightforward, the organization’s mission is by no means an easy undertaking. Its primary need is for a location that allows volunteers to sort and display books by age and subject matter, so that anyone else who works with under-resourced children can browse the shelves and select the books they need. A hardworking board and an April 2021 grant from the San Francisco Office of Economic and Workforce Development supported the nonprofit’s recent relocation from the Outer Sunset neighborhood to a larger warehouse space in Bayview. A July 2021 California COVID-19 Relief Grant offered further recognition of the organization’s importance in the community. Its supporters, according to Wydler, are “people who love books and want kids to love books.” In addition to much-needed financial contributions and volunteer hours, those supporters have donated over 125,000 new and like-new books to the Children’s Book Project thus far in 2021, of which over 85,000 have already been distributed. Looking forward to the organization’s thirtieth anniversary next year, Wydler says, “We are really energized by our new location and by the vitality of the people who just want to keep getting books to the kids who need them.” For more information, please visit childrensbookproject.org.

The premier lifestyle magazine for the Napa Valley and beyond.