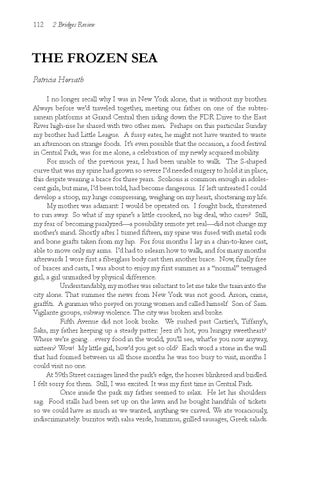 THE FROZEN SEA Patricia Horvath I no longer recall why I was in New York alone, that is without my brother. Always before we’d traveled together, meeting our father on one of the subterranean platforms at Grand Central then riding down the FDR Drive to the East River high-rise he shared with two other men. Perhaps on this particular Sunday my brother had Little League. A fussy eater, he might not have wanted to waste an afternoon on strange foods. It’s even possible that the occasion, a food festival in Central Park, was for me alone, a celebration of my newly acquired mobility. For much of the previous year, I had been unable to walk. The S-shaped curve that was my spine had grown so severe I’d needed surgery to hold it in place, this despite wearing a brace for three years. Scoliosis is common enough in adolescent girls, but mine, I’d been told, had become dangerous. If left untreated I could develop a stoop, my lungs compressing, weighing on my heart, shortening my life. My mother was adamant: I would be operated on. I fought back, threatened to run away. So what if my spine’s a little crooked, no big deal, who cares? Still, my fear of becoming paralyzed—a possibility remote yet real—did not change my mother’s mind. Shortly after I turned fifteen, my spine was fused with metal rods and bone grafts taken from my hip. For four months I lay in a chin-to-knee cast, able to move only my arms. I’d had to relearn how to walk, and for many months afterwards I wore first a fiberglass body cast then another brace. Now, finally free of braces and casts, I was about to enjoy my first summer as a “normal” teenaged girl, a girl unmarked by physical difference. Understandably, my mother was reluctant to let me take the train into the city alone. That summer the news from New York was not good. Arson, crime, graffiti. A gunman who preyed on young women and called himself Son of Sam. Vigilante groups, subway violence. The city was broken and broke. Fifth Avenue did not look broke. We rushed past Cartier’s, Tiffany’s, Saks, my father keeping up a steady patter: Jeez it’s hot, you hungry sweetheart? Where we’re going…every food in the world, you’ll see, what’re you now anyway, sixteen? Wow! My little girl, how’d you get so old? Each word a stone in the wall that had formed between us all those months he was too busy to visit, months I could visit no one. At 59th Street carriages lined the park’s edge, the horses blinkered and bridled. I felt sorry for them. Still, I was excited. It was my first time in Central Park. Once inside the park my father seemed to relax. He let his shoulders sag. Food stalls had been set up on the lawn and he bought handfuls of tickets so we could have as much as we wanted, anything we craved. We ate voraciously, indiscriminately: burritos with salsa verde, hummus, grilled sausages, Greek salads.