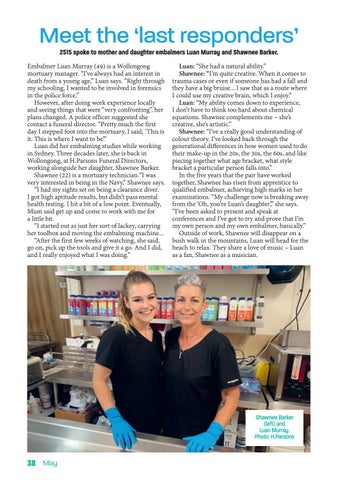 Embalmer Luan Murray (49) is a Wollongong mortuary manager. “I’ve always had an interest in death from a young age,” Luan says. “Right through my schooling, I wanted to be involved in forensics in the police force.” However, after doing work experience locally and seeing things that were “very confronting”, her plans changed. A police officer suggested she contact a funeral director. “Pretty much the first day I stepped foot into the mortuary, I said, ‘This is it. This is where I want to be’.” Luan did her embalming studies while working in Sydney. Three decades later, she is back in Wollongong, at H.Parsons Funeral Directors, working alongside her daughter, Shawnee Barker. Shawnee (22) is a mortuary technician.“I was very interested in being in the Navy,” Shawnee says. “I had my sights set on being a clearance diver. I got high aptitude results, but didn’t pass mental health testing. I hit a bit of a low point. Eventually, Mum said get up and come to work with me for a little bit. “I started out as just her sort of lackey, carrying her toolbox and moving the embalming machine... “After the first few weeks of watching, she said, go on, pick up the tools and give it a go. And I did, and I really enjoyed what I was doing.”

Luan: “She had a natural ability.” Shawnee: “I’m quite creative. When it comes to trauma cases or even if someone has had a fall and they have a big bruise... I saw that as a route where I could use my creative brain, which I enjoy.” Luan: “My ability comes down to experience, I don’t have to think too hard about chemical equations. Shawnee complements me – she’s creative, she’s artistic.” Shawnee: “I’ve a really good understanding of colour theory. I’ve looked back through the generational differences in how women used to do their make-up in the 20s, the 30s, the 60s, and like piecing together what age bracket, what style bracket a particular person falls into.” In the five years that the pair have worked together, Shawnee has risen from apprentice to qualified embalmer, achieving high marks in her examinations. “My challenge now is breaking away from the ‘Oh, you’re Luan’s daughter’,” she says. “I’ve been asked to present and speak at conferences and I’ve got to try and prove that I’m my own person and my own embalmer, basically.” Outside of work, Shawnee will disappear on a bush walk in the mountains, Luan will head for the beach to relax. They share a love of music – Luan as a fan, Shawnee as a musician.

Free community news, hand delivered to homes and businesses from Clifton to Bulli each month 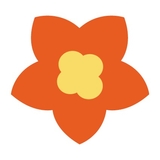