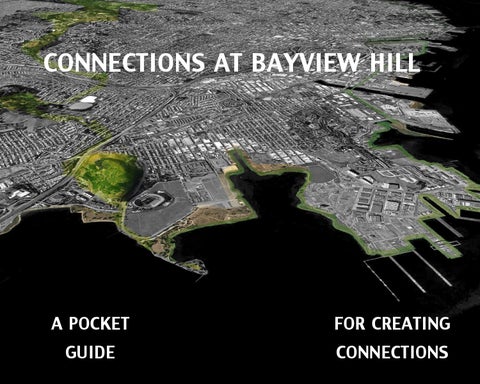 site into a key linkage in

This pocket guide shares a vision for providing multidimensional connections for Bayview Hill at Candlestick Point. The 44-acre Bayview hill is a beautiful, yet isolated, Natural Park tucked away in the Southeast corner of San Francisco. The park is located just west of Candlestick Point State Recreation Area. Highway 101 abuts the hillâ&amp;#x20AC;&amp;#x2122;s westerns edge and the Bayview-Hunters neighborhood is just to the northeast. Over the years, Bayview Hill and surrounding areas have seen a long history of dramatic and often destructive transformations in the both to the physical shape of the hill and its land uses. While encompassing rich ecological and cultural aspects, current access to this hill and to its trails are limited. In addition, major transformations are on the horizon for the areas surrounding Bayview Hill. With the mega-residential communities proposed post-demolition of Candlestick Stadium, the time to address the potentials of this hill is long overdue.

Where people go in SF

ecological Ecological connections at Bayview Hill include supporting the diversity of wildlife that exists at and around this hill. Proposed ecological strategies are to rehabilitate current biodiversity and replace the underutilized gray infrastructure at the eastern tip of the hill. This includes replacing areas such as the eastern parking lot, street and sidewalk with an evolving green corridor making a critical wildlife connection to Candlestick Point State Recreation Area. Bayview Hill is rich in wildlife and contains special species such as coast live oaks and toyons, native perennial grasses and low-growing coastal scrub plants. A casual survey by the California Native Plant Society revealed three large populations of the rare and beautiful San Francisco collinsia, Islais cherry, shooting star, and the only known population of coast larkspur in San Francisco. Rehabilitated areas would be managed to maximize ecological processes and opportunities for education, including the promotion of low impact, nature-based recreation. Bayview Hillâ&amp;#x20AC;&amp;#x2122;s rich grasslands and rock outcrops support a great diversity of wildlife such as the Red-tailed hawk and the American kestrel, Pacific ring-neck snake and over an acre of Mission Blue butterfly habitat. This habitat butterfly exists due to the presence of silver lupine, the host plant for this endangered species. Proposed interpretive signage will provide information on this special habitat to promote awareness and sensitivity.

Cross-section of existing biodiversity at Bayview Hill. GRASSLAND AND SCRUB

Located mainly on public land, this ecological park would provide a critical habitat corridor to the Candlestick Point State Recreation Area. This park also calls attention to the historical edge of the bay.

This park would also provide interactive connections at Bayview Hill such as zip lining and rock climbing.

physical Physical connections at Bayview Hill include design strategies to modify surrounding street connections that link to the regional open space network and to create new hill experiences. Modified street connections would promote a pedestrian-friendly environment. Proposed streetscape designs would be in-line with the cities Green Connections program, and Mayor Newsomâ&amp;#x20AC;&amp;#x2122;s 2009 Open Space task force proposal for a crosstown open space connection. Bayview Hill is also located along the Cityâ&amp;#x20AC;&amp;#x2122;s emerging Blue Greenway and regional Bay Trail system. These sustainable corridors would not only increase access to Bayview Hill, but also promote the expansion of urban forest to this area. The designs would also provide a host of benefits including safe routes for locals and the reduction of pollutants like stormwater runoff. In addition to modified streets, physical connections will include five phases of new experiences at Bayview Hill that will connect a variety of visitors, locals and stakeholders. Phase One is the 1.5-mile Loop Trail connection, Phase two the Edge Park Stairs, Phase Three is a pedestrian connection through the proposed Candlestick Village Center, Phase Four is the Southside Interpretive Trail, and finally Phase Five is the 2040 connection of an Aerial Tramway.

This loop could be built through a public-private partnership. For example, if the new Candlestick Point development were to build access D, the amount of construction to complete the other parts would be minor, as much of the proposed loop is pre-existing.

This phase, located mainly on Parks land, would not only provide a direct connection to the peak but connect Bayview Hill to the proposed Blue Greenway.

By using existing terraces and promoting a public-private partnership, this interpretive trail could become a reality. This trail is mainly located in the Executive Park ownership area.

In 2040, post-construction of the residential waterfront communities, this aerial tramway would provide a direct connection to Bayview Hill and an accessible connection for comunities west of Bayview Hill. It would also act as a new tourist attraction. For example, one could travel from downtown on the T-line to the Schlage Locke stop in Visitacion Valley, hop on the tramway at sunset and see 360 views of the city. After a stop at Bayview Hill to enjoy nature trails or visit the restored 1937 KYA historical building, the day could end with a bite to eat or a show at Candlestick Village Center.

cultural Cultural Connections at Bayview Hill include strategies to grow new alliances for stewardship of cultural landscape and form a sense of place with activities and events. Early use of Bayview Hill included cattle ranching and grazing with surrounding homes belonging mainly to industrial workers in the area. By the late 1800’s George Hearst proposed that the land be transformed into an upscale district but the land was considered too far from downtown. The hilltop was declared a park by1915 after plans were rejected to use the hill for a pest house. By the mid 1930’s the hill became home to KYA radio station in a beautifully designed art deco building by Julia Morgan for station owner William Hearst and was active well into the late 1940’s. Since the Bayview Hill is mainly made up of chert, it was seen as a resource for development, with large portions having been carved away by quarry operations around the base of the hill for development. All sides were altered somewhat, but none more than the northern and eastern slopes to make room for the stadium at Candlestick Point in the 1950’s which ultimately spurred the extension of land into the bay. While the KYA building remains one of the hill’s hidden gems of today, the hill is a gem in itself as one of the remaining pieces of San Francisco’s original landscape, with the biodiversity of native plants and animals that still live on Bayview Hill making it a Significant Natural Resource Area (SNRA), now preserved and protected by the San Francisco Recreation and Park Department.

form a sense of place by highlighting historic uses