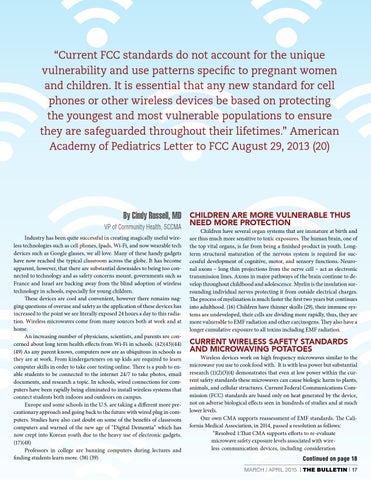 “Current FCC standards do not account for the unique vulnerability and use patterns specific to pregnant women and children. It is essential that any new standard for cell phones or other wireless devices be based on protecting the youngest and most vulnerable populations to ensure they are safeguarded throughout their lifetimes.” American Academy of Pediatrics Letter to FCC August 29, 2013 (20)

By Cindy Russell, MD CHILDREN ARE MORE VULNERABLE THUS VP of Community Health, SCCMA Industry has been quite successful in creating magically useful wireless technologies such as cell phones, Ipads, Wi-Fi, and now wearable tech devices such as Google glasses, we all love. Many of these handy gadgets have now reached the typical classroom across the globe. It has become apparent, however, that there are substantial downsides to being too connected to technology and as safety concerns mount, governments such as France and Israel are backing away from the blind adoption of wireless technology in schools, especially for young children. These devices are cool and convenient, however there remains nagging questions of overuse and safety as the application of these devices has increased to the point we are literally exposed 24 hours a day to this radiation. Wireless microwaves come from many sources both at work and at home. An increasing number of physicians, scientists, and parents are concerned about long term health effects from Wi-Fi in schools. (42)(43)(44) (49) As any parent knows, computers now are as ubiquitous in schools as they are at work. From kindergarteners on up kids are required to learn computer skills in order to take core testing online. There is a push to enable students to be connected to the internet 24/7 to take photos, email documents, and research a topic. In schools, wired connections for computers have been rapidly being eliminated to install wireless systems that connect students both indoors and outdoors on campus. Europe and some schools in the U.S. are taking a different more precautionary approach and going back to the future with wired plug in computers. Studies have also cast doubt on some of the benefits of classroom computers and warned of the new age of “Digital Dementia” which has now crept into Korean youth due to the heavy use of electronic gadgets. (17)(48) Professors in college are banning computers during lectures and finding students learn more. (38) (39)

Children have several organ systems that are immature at birth and are thus much more sensitive to toxic exposures. The human brain, one of the top vital organs, is far from being a finished product in youth. Longterm structural maturation of the nervous system is required for successful development of cognitive, motor, and sensory functions. Neuronal axons – long thin projections from the nerve cell – act as electronic transmission lines. Axons in major pathways of the brain continue to develop throughout childhood and adolescence. Myelin is the insulation surrounding individual nerves protecting it from outside electrical charges. The process of myelination is much faster the first two years but continues into adulthood. (16) Children have thinner skulls (29), their immune systems are undeveloped, their cells are dividing more rapidly, thus, they are more vulnerable to EMF radiation and other carcinogens. They also have a longer cumulative exposure to all toxins including EMF radiation.

Wireless devices work on high frequency microwaves similar to the microwave you use to cook food with. It is with less power but substantial research (1)(2)(3)(4) demonstrates that even at low power within the current safety standards these microwaves can cause biologic harm to plants, animals, and cellular structures. Current Federal Communications Commission (FCC) standards are based only on heat generated by the device, not on adverse biological effects seen in hundreds of studies and at much lower levels. Our own CMA supports reassessment of EMF standards. The California Medical Association, in 2014, passed a resolution as follows:  “Resolved 1:That CMA supports efforts to re-evaluate microwave safety exposure levels associated with wireless communication devices, including consideration 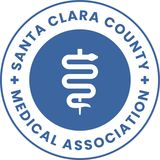