From the Past to the Present but to the Future?? 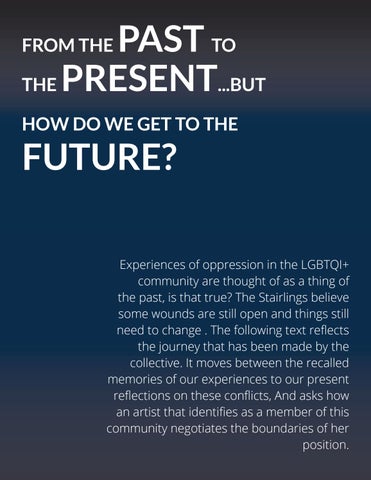 HOW DO WE GET TO THE

FUTURE? Experiences of oppression in the LGBTQI+ community are thought of as a thing of the past, is that true? The Stairlings believe some wounds are still open and things still need to change . The following text reflects the journey that has been made by the collective. It moves between the recalled memories of our experiences to our present reflections on these conflicts, And asks how an artist that identifies as a member of this community negotiates the boundaries of her position.

Do you believe that part of existing in this world is being heard? Well, I do. And because of that ladies, gentlemen, and anyone beyond the binary...I would like to take you back. It’s the early 80s and I’ve come out to my family and friends. I’m 19. And, let me tell you. Gay people are about as popular as lepers.

If you were obviously gay you’re pretty unemployable, actually This means the situation I find myself in isn’t great by any stretch of the imagination.

In fact, now that I think about it, there were practically no other young people either. I guess they just didn’t come out as young, because of how difficult it was

Am I an artist or a lesbian now? Do I have to choose?

But, I find the Hirschfield Centre pretty quickly and that is a stroke of luck. It’s here I find a sort of...kinship. With other queer people, ya know? A space we claim as our own, and different from the pubs where I could be barred if I was caught even flirting with another woman!

You know I was once...barred from somewhere.. for kissing a woman on the cheek This place though...it’s hard to describe how important it is to me. Flikkers the club here only offers one ladies night, but I go to all the others because the music is so good and I don’t have to worry about being seen.

My membership number was 2006, that should tell you how popular the place was. You had to be a member to get in of course, the place was like a fortress.. And it was here in the Hirschfield, that a lot of grassroots campaigns got started. That’s how I got involved in the marches.

There was a library full of international gay and lesbian writing, political stuff but social and cultural stuff too. GCN even got started there in 1988.

We develop a collective as an form of solidarity building. It means I can claim space as an artist in this group, but can I, without losing my identity as a lesbian in the this community? I am both. The waters are quick to muddy if things aren’t kept in sight. I stake a position as artist but do it holding my identity tight

But, people aren’t talking about trans stuff, it’s difficult enough sometimes to find space for the lesbian stuff in the politics.

The National Gay Federation - the NGF were established for 13 years before they included lesbian in the title…. That was in 1991.

Trans people existed too, but we were in

I’ve been trying to find positive stories about trans people but it’s really difficult. The newspapers are the worst, not as bad here as they are in the UK but they make us out to be perverts.

Looking back, the media sexualised any reference to our lives. There weren’t any positive stories about trans people that I can remember. Except for April Ashley, she was

It’s as though I move between them both, some days I don the artists hat. On others, the lesbian hat. When we listen to Pantis speech we recognise each others oppression, I am a member of this community. When we decide to write our own speeches, I recognise the artists voice that leaves my mouth. Finding a distinction between the two is difficult

on the Late Late in 75’ I think. But we have our own club night, Lola’s Disco. You have to be a member of Friends of Eon but it doesn’t matter if you’re a transexual or transitioning and transvestites are welcome too.

Lola’s Disco ran from 1977 to the mid 1980s in the Parliament Inn. Most people had to get ready in the a room in the club...we didn’t want to risk being seen in the streets. We were scared of what could happen. We have a helpline though, if you need someone to talk to, ya know...if you can’t come to one of our nights.

Only two places would run Friends of Eon ads back then. Hotpress and InDublin. Of course this was before GCN had even started! Lately, we’ve been watching everyone else pushing for their rights; gay people, black people, women. Isn’t it about time things started to change for us!? And, things did change you know. The way people would talk about us became less sexualised sometime in the 90s. That caused its own problems though, suddenly it was transgender not transexual and transvestites felt like the black sheep. As a small community, that was pretty tough.

When I was younger and I read about the queer or LGBT community..I was given a sense of hope about one day finding my people...whatever that means. It’s funny thinking back, me and my friends were actually known as the gay gang in primary school.

D’ya know, if I’m being honest..being labelled gay never sat right me. I mean, I did fancy other guys. So, I kind of took it as a given. I just figured questioning my gender was part of the process. Being a part of a small queer community in that way and having some of my own ‘people’ was not helpful or comforting. I was used as their scapegoat, I was the queer!

Is the distinction between my lesbian identity and my role as an artist in this collective important? Socially engaged practice is known for collapsing the boundaries between art and life. During our conversations it is my personal experiences in the community that I draw on, not my art that helps me connect with the others

It’s hard to justify my place in the community at the moment. I’m not a gay man, but I look like one. And, I am a trans woman but there’s no confidence behind me saying that.

But it is my art practice that drives us forward, brings us back to work, that reigns us in when we are on tangents

I got turned away from a lesbian club night because the bouncer thought I was in the wrong place...until my girlfriend turned up..

I wonder if I will only ever be lesbian enough when I have my girlfriend with me.. It’s like I’m invisible to other gay people. No one ever sees me for who I really am. When I came out to my Mum. She said... That I just hadn’t met the right boy yet.

Do you want to know the day that I really felt ‘gay enough’. It was the same day I first experienced homophobic insults on the street. Jesus. Is that what it takes to feel gay these days?

When you hurt someone, you leave a bruise, but when you torment them? When you torment them you leave them upset and angry. The distress they feel is the invisible scar that you leave. I have friends and family that offer to help me and show me support. And the rest of the LGBT community. they invite me into their spaces and their parade. But it’s only fun when we’re playing dress up, otherwise I’m needy. And, you deny the role my ancestors played in carving the roads you joyfully march down. I know I’m not supposed to hate you. Hate gives you a reason to feel victimised. But it’s hard sometimes

I like Chantel Mouffe’s ideas of agonism*. That democracy requires difference and conflict not consensus. Consensus doesn’t exist, not rationally anyway with so many varying perspectives. Perhaps in the difference and conflict between these identities I have found a way of working conscientiously and productively within my community

The Stairlings And you are not the victim. But we don’t want to be either. We’re telling you these things, not to dwell on them.

We want you to know things still need to change. Yes, the 22nd of May 2015 will be a day we will never forget. But that victory wouldn’t be a victory if people hadn’t been wounded. We’re not done healing yet.

In that, collectively writing a speech is about making visible what is usually hidden, ‘in giving a voice to all those who are silenced within the framework of the existing hegemony’ (Mouffe, 2013, p. 92)

But things still need to change. Until we ALL have equal rights, equal pay and equal opportunity. Until we end oppression and discrimination.

For the purposes of this publication, our names have been changed and we are not identifiable. It matters less which of us said what, only that we are together in this action. What matters more it that through our exploration of LGBTQ+ history, we connected. We connected through the knowledge that we have all felt oppression because of our identites in this community. And not just oppression from the outside, but sometimes more damaging, we have felt oppression and discrimination from the inside our community too. This is an artefact of our connected knowledge (Sholette, 2005), for our voices to be heard. For us to exist. For change to be made.

From the Past to the Present but to the Future?? 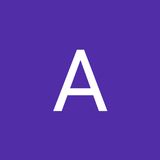