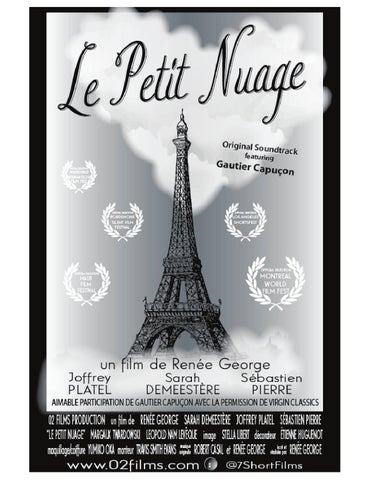 LE PETIT NUAGE (The Little Cloud), the first black-and-white silent film in the feature film anthology entitled 7 SHORT FILMS ABOUT LOVE, is an enchanting tale of a love affair sparked during a chance meeting at a café in Paris. One glance and a flicker of attraction transforms into wistful love and a delightful journey through the City of Light.

Director Renee George found her inspiration for LE PETIT NUAGE while lighting the set of THE ARTIST, the Oscar-winning black-and-white silent film. The warm story, historic sets, costumes and stellar performances reignited Renee’s passion for directing. LE PETIT NUAGE is her cinematic response, an homage to early black and white cinema. The French had come to America to make a film about love in Hollywood. As an American she traveled to France and made a film about love in Paris. The decision to shoot LE PETIT NUAGE after the Cannes Film Festival was made after encouragement from a friend. Renée had just witnessed THE ARTIST’s metamorphosis from out-of-competition to in-competition at the festival, and the twenty-minute standing ovation following the red-carpet screening at the Palais. This level of excitement and celebration of silent film led Renée to extend her stay, secure a cast and crew in one week and complete the filming in Paris over three days. Still in Cannes, Renee phoned Isabel Ribis, the French script supervisor from THE ARTIST who had become a close friend, asking for recommendations for a Director of Photography. Within twenty minutes Stella Libert was seated at her table agreeing to shoot the film and securing additional French crew. Renee then met with Sarah Demeestère, whom she originally met in Los Angeles as part of a French conversational meetup group, and Sarah agreed to act in the film. After seeing Joffrey Platel’s headshot on Facebook, Renée met with him in Paris and he agreed to play the male lead, inviting her to a theatre performance two days later. Onstage at the theatre was Sébastien Pierre, perfect for the role of the waiter. The final role for the canine actor was cast at the soirée following the theatre play, where one of Joffrey’s friends walked up with a little dog in her arms. 2

The music for LE PETIT NUAGE was co-composed by Renée George and Robert Casal, film composer, conductor and orchestrator. Renée sang melody ideas and together they created the original score, a method that has been compared to Charlie Chaplin’s style of composition. In a twist of fate, after shooting LE PETIT NUAGE in Paris, Renée had a chance meeting with GAUTIER CAPUÇON, celebrated French cellist and concert soloist. She spotted him in the Charles DeGaulle airport waiting to board the same flight to Los Angeles. She hurriedly scribbled a note in French to ask him if he would consider playing on the LE PETIT NUAGE soundtrack. Miraculously, he said yes, and they agreed to correspond once the editing was completed to confirm his interest. Once the film was cut, she sent a link to Gautier who sent back an email with a one-word subject line: BRAVO. Renée and Robert then recorded Gautier with the Argentinean bandoneonist Emmanuel Trifilio in Washington D.C. before one of Gautier’s four performances that week at the Kennedy Center. LE PETIT NUAGE is first in the feature film anthology of 7 SHORT FILMS ABOUT LOVE. Each short will be filmed in a different country and tell a different story of love, The second film in the series LAGO DI SETA (Silk Lake) wrapped principal photography in May 2012.

Her film LE PETIT NUAGE screened in selection at the 2012 Maui Film Festival, World Competition at the Montreal World Film Festival, and at the Pordenone Silent Film Festival, the largest silent film festival in the world. She wrapped LAGO DI SETA (Silk Lake), now in post, and the second film in the 7 SHORT FILMS ABOUT LOVE feature film series. Her first short NOWHEREVILLE, won awards at the Photo: Michael Kovac

Aspen Short Film Festival and New York Short Film Expo, and was in official selection at the Suffolk County Film Festival. She worked on the set of THE ARTIST in the lighting department as a Best Boy under Gaffer Jim Plannette (Ocean’s Eleven, E.T., Young Frankenstein). In addition to 7 SHORT FILMS ABOUT LOVE, Renée’s feature film projects include PERSISTENCE OF VISION, an original screenplay about Nikola Tesla and the birth of the film industry, and UNE VIE EN IMAGES, a french-language biopic about the life of a French cellist to star Gautier Capuçon. Renée is also an executive producer on INFLUENCE an international thriller about the Pan Am 103 Lockerbie disaster. Her musical background includes tours of the U.S. and Canada and four albums recorded as a member of the all-girl band TETES NOIRES. These talents are highlighted in the original score of LE PETIT NUAGE, which she co-composed with conductor and orchestrator Robert Casal. Renée holds a BFA in Media Arts from the Minneapolis College of Art and Design and she attended the prestigious graduate film program at New York University’s Tisch School of the Arts.

Joffrey Platel, Actor Joffrey began acting at the tender age of seven. He studied acting first in school with an improvisational theatre group, then later with the actor’s studio Laboratoire de l’Acteur under Helene Cheruy. Joffrey worked with the theatre troupe Atelier Pierre Palmade at the Theatre de la Gaite Monparnasse before beginning his career in cinema. He has appeared in several films including PARIS by Cedric Klapisch and SECRET DEFENSE by Philippe Haim, commercials, television shows and

Sarah Demeestère, Actor Sarah studied film at the Sorbonne in Paris then came to Los Angeles to explore the journey of acting. She starred in three short films including DuElle, which she also directed and produced. She’s now writing her first feature film.

Gautier began playing at the age of four. His formal music education began at Ecole Nationale de Musique de Chambery where he graduated with prizes in cello and piano. In Paris, he studied at the Conservatoire Superieur de Paris and the Conservatoire National Superieur de Musique de Paris (CNSMP). He has played in the European Union Youth Orchestra under conductors Bernard Haitink, Pierre Boulez, and Claudio Abbado. He now enjoys a flourishing concert career, in demand internationally as a soloist, playing with the world&#39;s leading conductors and orchestras. He plans to play on all of the soundtracks for the different films in the 7 SHORT FILMS ABOUT LOVE series.

A violin teacher at the USC Thornton School of Music and a founding member and first violinist of the Rossetti String Quartet, Henry studied at the Conservatoire in Saint-Quentin and at the Conservatoire National de Region de Versailles, then with Michele Auclair and Zino Francescatti. Both a chamber musician and concert performer, he has played London’s Wigmore Hall, Carnegie’s Weill Hall in New York City and for an array of music festivals around the world. 6