Molly Meister is a public information officer in the DNR’s Office of Communications.

It was the night before last year’s nine-day gun season in Wisconsin, and Claire Weslaski couldn’t sleep.

“(It) was like Christmas Eve to a kid,” she recalled. “Finally, the day arrived!”

That morning, Claire, donning blaze pink from head-to-toe including her knit hat, walked into the woods alongside her husband, Kevin, outside their cottage near Rosholt in Portage County. Kevin went one way, and Claire went to the tree stand he built for her.

“I entered the woods right on time, and I went to my stand with my thermos of coffee. It went just as planned and practiced. I had no surprises,” said Weslaski, who owns a website design company in Racine. “Even the ‘(deer) eyes in the woods’ didn’t scare me as I shined my flashlight around.”

While Claire perched patiently in the deer stand, a doe walked right in front of her at 7:58 a.m.

“I pulled up my gun and thought, ‘It’s the moment of truth, are you going to do it?’ I only had seconds to answer myself,” she said. “If she went into my sight, I would shoot. And I did.”

A lifelong athlete and nature lover, Weslaski was encouraged to take up hunting by her son, now an avid bowhunter, and her husband, who’s hunted frequently over the years. Even her daughter started showing interest.

In the weeks leading up to her first deer season, Weslaski dove headfirst into preparation. She purchased her first gun, learned to shoot, scouted land, bought her harvest authorizations, read through the DNR’s hunting regulations handbook and watched countless tutorial videos.

Although venison has been a staple in the Weslaski household for decades, the family of four had been relying on the harvests of friends and relatives to keep them stocked up.

This November marked Weslaski’s second deer hunting season, and she’s now among the growing trend of hunters earning their meat. What started as joining the family hobby turned into putting venison on the table for her family.

“That’s the most rewarding part. And I’m buying less processed meat from the grocery store. When I saw my freezer full of venison from the doe I harvested last fall, it was one of the highlights of my life,” she said.

“I’ve been cooking beef, pork and chicken day after day for 30 years. Now, I’m able to cook my own venison and share it with others.”

Weslaski enjoys the leanness of the meat, as does her triathlete husband, who has made it a tradition to eat a venison steak to load up on clean protein before each race.

Getting outside in nature is good for your physical and mental health. And it turns out that venison has benefits for you, too.

Venison is lower in saturated fat (good news for your heart), unsaturated fat and calories than storebought beef, according to Jean Reiche, a clinical dietitian at UW Health in Madison. It is also high in protein and contains essential nutrients such as iron, riboflavin, niacin and B vitamins.

“Another perk of deer meat is that as a hunter and consumer you know exactly where it comes from,” Reiche added. “While meat at the store has labels, those labels don’t necessarily show all the ingredients. It’s likely that antibiotics, natural flavoring, solutions, salt or other preservatives were added along the way.”

Reiche recommends using venison in place of store-bought meat for a healthier option with a variety of uses. Venison can easily be substituted as a leaner protein in spaghetti sauce, soups, chili, burgers and more.

GOOD FOR THE HERD

Studies show that hunting can help keep the deer population in check, which in turn helps Wisconsin’s ecosystem.

“White-tailed deer have a high reproductive rate that has to be matched with a high mortality rate. Otherwise, things get out of balance,” explained Jeff Pritzl, the DNR’s state deer program specialist.

“If the population goes unchecked, food resources become scarce, which can lead to starvation, and we would likely see an increase in car versus deer accidents.”

Every ecosystem has a limit to the number of deer it can sustain, Pritzl said. If humans stopped hunting deer, nature would eventually reduce the population in other ways, but not without significant negative consequences for ecosystems, human interests and deer herd health, including agricultural crop destruction and the spread of disease.

For Weslaski, it’s all about taking responsibility for the food she puts on the table.

“Sure, I could go grab a burger after a long day in the woods, but I wouldn’t know anything about where it was raised, how it was harvested or the process it went through to get on my plate,” she said.

“Instead, I head home where I have a pot of venison chili waiting on the stove. I know where the deer I harvested lived, and that it led a happy, natural life. I feel satisfied and proud that I went out there and harvested it myself.”

For more on the DNR's Hunt for Food opportunities, visit https://dnr.wisconsin.gov/Education/OutdoorSkills/HuntForFood. 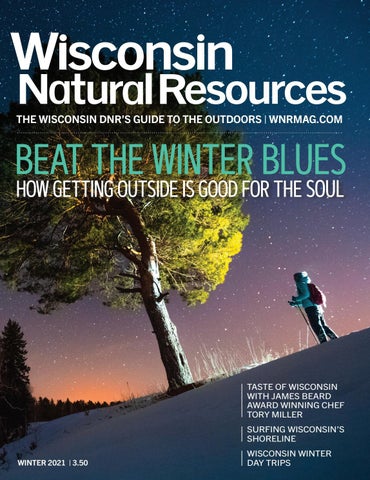