Up In Smoke: Spring Means Peak Time For Wildfires In Wisconsin 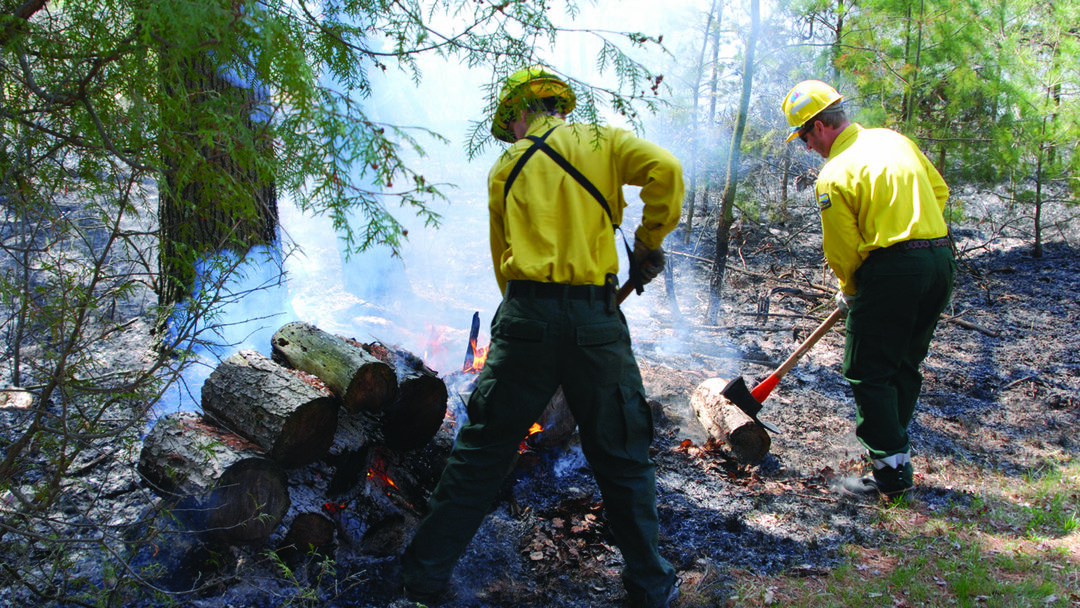 Be Firewise: How To Prepare Yo...

UP IN SMOKE: SPRINGS MEANS PEAK TIMES FOR WILDFIRES IN WISCONSIN

JOSHUA MORRIS
Joshua Morris is a public information officer in the DNR’s Office of Communications.

Last April, Marc Sass was behind the wheel of a fire engine, rushing toward a fast-moving wildland fire in Menomonee Falls. While on his way to the scene, he called for ground and aerial support.

Sass is a DNR cooperative area specialist who assists with wildfires in southeastern Wisconsin. Having worked fires for nine years, he knows brush fires like these can burn up to 1,500 degrees and travel as swift as the wind, which means his team must be quicker.

As the fire raged on, thick black smoke could be seen from across the Milwaukee metro area. A spark from a train on a nearby railroad track started the fire that would burn nearly 230 acres.

Hours later, as the sun was setting and smoke continued to rise, the fire and its imminent danger were at the very least contained. It would be monitored for several days until completely put out.

From warming homes to cooking food, fire can be a helpful tool. Fire also can be destructive.

Unlike out West, spring is the most dangerous time for wildfires in Wisconsin. After the snow melts and before plants, trees and grass turn green, fires can spread quickly.

While spring is always much welcomed after Wisconsin’s long winters, the season’s warm, dry and windy conditions create the perfect recipe for wildfires.

Although wildfires can happen just about any time of the year, historically 60% of all annual wildfires in Wisconsin occur in March, April and May. In the state’s southern tier, fire danger could begin as early as midto late-February and eventually progresses northward through the state.

With debris burning the leading cause of Wisconsin’s wildfires, weather is the single most crucial factor influencing how fires start and spread. Temperature, wind, humidity and precipitation are the key weather components that determine the daily fire danger.

While spring is Wisconsin's most critical fire season, wildfires can still happen in summer. Despite the elevated humidity and vegetation turning green, there is increased activity that may spark fires, such as equipment use, fireworks and camping.

Fall has a shorter peak for fire danger but can still produce a dangerous environment for fires as the leaves fall, covering the ground with dry, dead and loose material. Leaf burning and using fire pits to keep warm are also common in fall.

Although winter is the least dangerous time, some fires can burn for weeks, which can be a problem if spring begins to approach.

HOW DO FIRES HAPPEN?

Wildfires can start anywhere, especially where people live. People start 98% of wildland fires, most often by burning debris in the spring when vegetation is still dead and dry. Fires also have been started by heavy equipment and vehicles, while lightning strikes have sparked a small percentage.

Generally speaking, wildfires of greater intensity tend to occur in areas of the state with sandy soils and pine country, though more populous areas may see a higher number of smaller fires. The average size of wildfires handled by the DNR is under 1 acre.

“A wildland fire fuel can be anything from long prairie grass, pine needles or leaves, to dead trees that are tipped over,” Sass said.

Because fuels can be found in rural and urban areas, the DNR sets burning restrictions in certain parts of the state and requires burning permits, which help lower the number of wildfires. Burning permits are free and easy to obtain and protect lives, property and natural resources from the damages of wildfires. Go to dnr.wi.gov/burnpermits.

Burning permits help prevent wildland fires, but what happens when a fire ignites? The DNR has a full suite of fire suppression equipment, vehicles and tools to ensure fires don’t get out of hand.

DNR forestry technicians like Alex Grubbs, based out of Trout Lake, work tirelessly to ensure the equipment is properly maintained before, during and after a fire occurs.

“I’ve always been interested in being a first responder,” Grubbs said. “I like this job because it brings multiple jurisdictions and communities together. At the same time, you’re hopefully saving houses, lives and keeping people safe.”

Grubbs and other technicians throughout the state make sure vehicles with water tanks are full and equipment is functioning correctly during fire calls. The DNR’s firefighting equipment is located centrally in areas staff are protecting to improve response times, which average under 10 minutes.

In the spring, fire officials remain on high alert until most vegetation has greened up. The DNR does not oversee wildland fire suppression in all areas across Wisconsin, and volunteer fire departments are a crucial partner in fire suppression efforts.

If a fire is burning in a cooperative protection area, which means it is outside the DNR protection area, local fire departments take the lead on responding to fires and can request the DNR’s help if needed.

The department regulates DNR protection areas and requires a burning permit during certain times of the year. The DNR is primarily responsible for responding to fires large and small in these areas.

Not every DNR fire situation is reactive. And the conditions that can produce wildfires are similar to those the department needs to conduct prescribed burns.

Prescribed fire, also known as controlled burning, is an essential tool for restoring animal habitat, controlling growth of invasive plants and promoting native species and oak and pine regeneration. In 2021, the DNR performed 280 prescribed burns, burning 35,916 acres around the state.

“One of the benefits of prescribed fire is the removal of excess dead fuels that can build up over time,” said Michele Witecha, a prescribed fire specialist for the DNR. “This is great for the natural community, but in a few places, it also plays an important role in reducing the possibility of a wildfire. Without dead and dry fuels, an ember has less chance of igniting a fire.”

Witecha’s role is to establish guidelines for planning, implementing and evaluating prescribed burns throughout the state. Such burns are carefully orchestrated to achieve desired goals.

When surface debris is removed, it provides an opportunity for native grass and wildflower species to compete and propagate once more. The decrease in both brush and surface debris also allows for better foraging.

“I have been lucky enough on several occasions to see deer and turkey choosing to forage in the evening at a still-smoking burn unit,” Witecha said. “Good fire allows the forest to continue to provide benefits to wildlife, even right after its occurrence.”

Learn more about fire management in Wisconsin at https://dnr.wisconsin.gov/topic/ForestFire