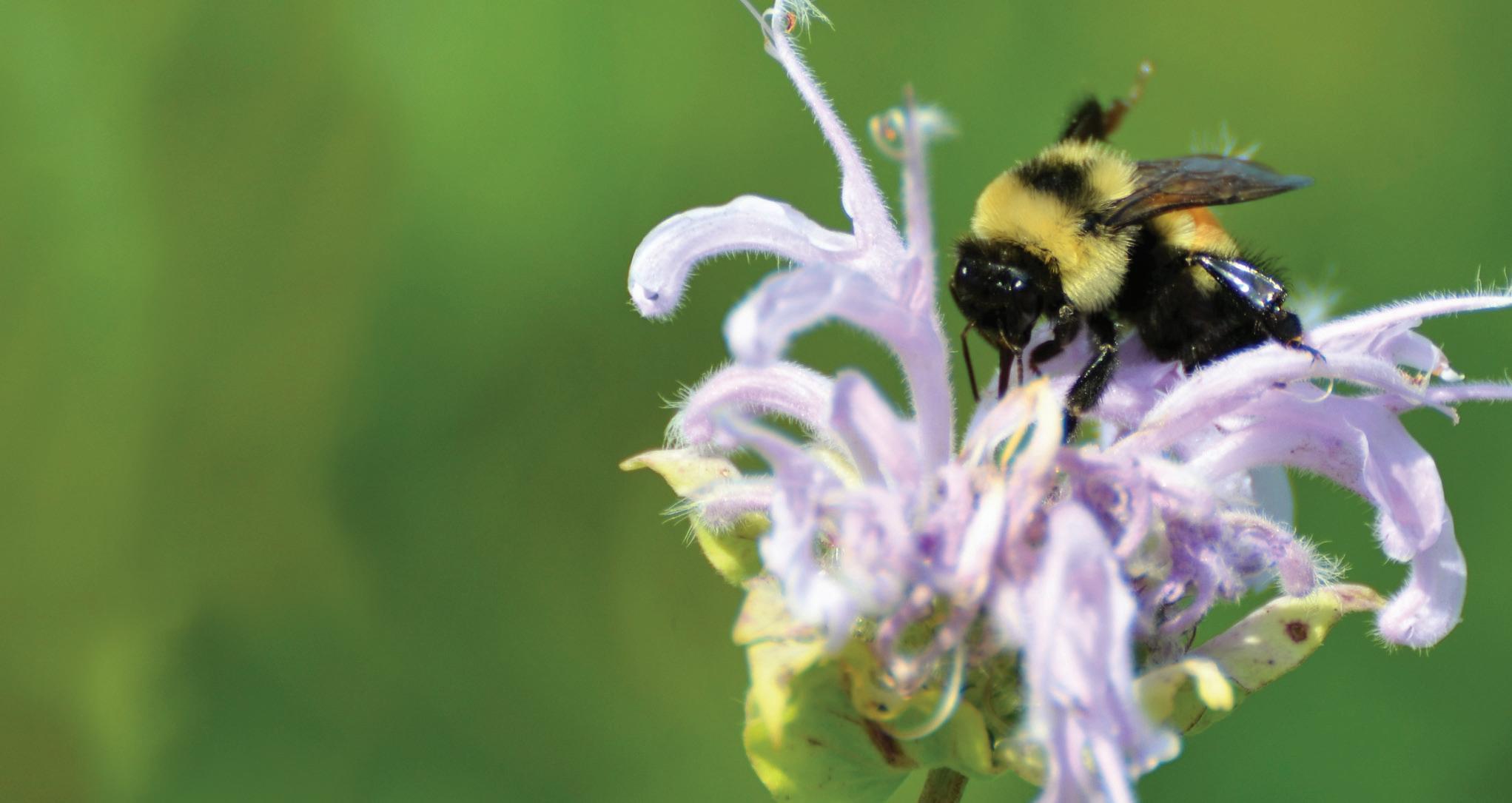 The sound of a single rusty patched bumble bee in Milwaukee County last summer led to the exciting discovery of a nest in this small hole.

So perhaps it should come as no surprise that when Halley Minser, a Milwaukee County Parks employee doing restoration work, first discovered a nest of the federally endangered rusty patched bumble bee, it wasn’t because she saw the hole or the unobtrusive bees, but because she heard the loud, iconic buzz of the queen bumble bees emerging from the nest. By following that sound, Minser found the small hole that became the target of a burst of activity for biologists and conservation professionals from across the state.

The rusty patched was once abundant and widespread in the eastern United States, but by 2017 the species had declined by almost 90% and was listed by the U.S. Fish and Wildlife Service as federally endangered.

Wisconsin is home to some of the last populations of the rusty patched. In fact, the bumble bee has been documented in 37 counties in the state from 2017 to 2020.

While that number seems impressive on the surface, the majority of the observations have been of only a single individual, as opposed to the dozens or even hundreds of individuals of other bumble bee species that sometimes are reported.

As biologists and skilled volunteers scour the landscape for the rusty patched, they are finding it in frighteningly small quantities, and nests are all but unheard of. In fact, the nest Minser found was the only one reported in the first three years of a new statewide bumble bee monitoring project, the Wisconsin Bumble Bee Brigade.

The queens are inactive throughout the winter and spend it burrowed into the soil or woody debris. Early in the spring, they emerge and begin collecting nectar and pollen and searching for a place to nest, usually underground.

In mid- to late summer, queens produce males and new queens, which mate. Because of the annual nature of their life cycle, all but the newly mated queens die in the fall, with only these few survivors left to overwinter and begin the cycle anew in the spring.

The vast majority of rusty patched observations are made when the bees leave the nest and forage. Because they can fly long distances (more than a mile) for food, the location of foraging bees doesn’t necessarily reveal information about nesting habitat.

As a result, much remains unknown about what is required for a nesting site and what contributes to nest success or failure, information that is critical for conservation of the species. The Milwaukee County nest provided an extremely rare opportunity to study the habitat surrounding a nest, as well as the day-to-day activity of the bees at the nest entrance.

While Minser wasn’t surveying for bumble bees when she found the nest in mid-August 2020, she regularly monitors bumble bees on Milwaukee County Parks properties, so she immediately knew the importance of her find.

“I would’ve been thrilled to find a nest of any bumble bee species. I was in momentary disbelief when it turned out to be an affinis nest,” she said. “I was shocked and then giddy with excitement once it sunk in.”

She then stopped all work on the site and created a buffer zone around the area before reporting the observation.

“Holy grail! Please let me know what I can do to contribute information/data,” she wrote when she submitted the observation to the DNR that evening.

DNR staff were equally excited to receive her report, exchanging a flurry of emails early the following morning and quickly verifying the observation based on Minser’s photographs. Jay Watson, the DNR’s terrestrial insect ecologist, immediately reached out for access to the nest to collect much-needed information on the endangered bee.

Watson, whose responsibilities have him crisscrossing the state surveying for rare insects, was committed to critical work elsewhere the following day. However, he knew the lateness of the season — coupled with the fact Minser had observed new reproductive females usually produced at the end of a colony’s life cycle — limited the time to gather additional observations.

Recognizing that urgency, he reached out to another Wisconsin bumble bee expert, Amy Wolf, a professor at UW-Green Bay. Wolf made the drive to Milwaukee the next day, where she and Minser began marking individual bumble bees with small dabs of paint as they left the nest to estimate the number of bees living there.

The U.S. Fish and Wildlife Service also was contacted, and they provided guidance on survey techniques and what type of habitat and demographic data would be most useful to their work with the rusty patched. They connected Watson with a researcher leading on-the-ground work at two nests found in Minnesota, allowing the two teams to share information and collaborate.

Over the next three weeks, Minser made frequent trips to the site to monitor the nest, often accompanied by Watson. Wolf supplied a trail camera to record wildlife activity around the nest, and marking of individual bees continued — with as many as 10 bees caught and marked during a single three-hour observation period.

The number of individual bees sighted certainly exceeded the typical number normally found while surveying in a foraging habitat, but it was still relatively small. This could have been impacted by the lateness of the season, as the number of bees in the nest likely peaked in mid-summer.

Of particular note to the scientists was the observation that the newly produced reproductive females, or gynes, entered and left the nest multiple times. Simple models of the bumble bee life cycle often have gynes leaving the nest to mate and never returning, but that was clearly not the case here.

The fact these reproductive individuals returned to the colony multiple times made it clear a nest is even more important in the survival of individual bees and the species.

In addition to the nest, Watson and Minser surveyed the area surrounding the nest extensively, identifying the locations and plants on which the rusty patched bumble bees were feeding.

These surveys revealed the presence of several males in the area, good news for the newly produced queens that needed to mate quickly before finding a safe place to overwinter and then start new colonies in the spring.

By the first week in September, rusty patched activity at the nest had come to a halt, and Minser spent hours observing the nest to ensure that no additional bees were still inside. With high confidence that no bees were left to be disturbed, the next phase of activity began.

At the suggestion of the U.S. Fish and Wildlife Service, a group called Conservation Dogs Collective (formerly known as Midwest Conservation Dogs) was contacted. This Milwaukee-based organization trains dogs to identify and locate biological scents useful to conservation work.

The organization has had success identifying salamanders, turtles and invasive species and recently began training dogs to sniff out bumble bee nests.

Laura Holder, executive director of Conservation Dogs, brought two dogs to the site to expose them to the smell of the rusty patched nest. The dogs, named Ernie and Betty White, are trained to detect but not disturb bumble bee nests.

Both exhibited heightened interest in the area, and Ernie paid special attention to the nest hole and the 4 to 6 feet of ground surrounding it. Exposure to the scent of a wild bumble bee nest, especially that of the rusty patched, was an excellent opportunity for the dogs.

“(It was) a critical step in honing their detection skills for the endangered rusty patched bumble bee nests,” Holder said of the experience. “This ensures the dogs are learning how to find the nests in the natural environment and also helps us understand how our dogs work in field-based scenarios, which can vary greatly with this species.”

Later that week, the bumble bee experts from the DNR and UWGreen Bay again met with Minser at the nest, this time with an endoscope — a lighted camera on a flexible cable. They were not able to maneuver the device far enough into the hole to see the nest itself, but it provided a better view of the hole opening, which appeared to be part of an abandoned rodent burrow, possibly that of a chipmunk.

Excavating the nest was discussed by ultimately decided against, in order to be completely sure no bees would be hurt if one was unexpectedly still using the nest.

Just over three weeks after the nest was found, the on-the-ground research and observations ended, but the partnerships in place to study and conserve rusty patched bumble bees certainly did not.

“We have strong partnerships in Wisconsin to support bumble bee conservation,” Watson said in reflecting on the joint efforts of federal, state and county governments, along with university and nonprofit organizations. “That’s what made it possible to learn so much about this rusty patched nest.

“It was such an exciting opportunity to expand our knowledge, and we plan to continue building partnerships that help support important bumble bee conservation work into the future.”

The location of the nest illustrates another key point in rusty patched conservation: They have been repeatedly found in urban areas. The quality of wildlife habitat in urban areas varies greatly, but it is often more abundant than we think.

The Milwaukee County Parks Natural Areas Program manages more than 9,000 acres throughout the county, including highquality habitats and some in need of restoration. Minser and other employees work in partnership with volunteers to monitor wildlife, and they use the resultant monitoring data in conservation planning and management.

Park staff were removing buckthorn and other invasives as part of a multiyear restoration project when the rusty patched nest was found. In the fall, they spread a native seed mixture throughout the area that was cleared of invasives.

The mix contained a number of flowers used by pollinators, including those that provide food to the rusty patched, like culver’s root and jewelweed. Minser hopes the restoration efforts will improve the area for the bumble bee, and she and other Milwaukee County staff will be regularly monitoring the site for rusty patched in the future.

The presence of rusty patched bumble bees in less than pristine conditions doesn’t mean they prefer to live in such habitats, but it demonstrates their tenacity and ability to persist in unexpected places. In many cases in Wisconsin, those places include local parks, gardens and back yards — areas where the public can play a key role in conservation and monitoring.

You can help the rusty patched bumble bee and other species in several ways.

-Plant a variety of natives that flower April-October, so food is available throughout the season.

-Minimize pesticide use, as insecticides can harm or kill bees and herbicides can kill the plants they need for food.

-Leave some or all of your yard natural or unmanicured; brush and leaf piles, woody debris, bare earth and old rodent tunnels all provide important habitat for bumble bees.

Also check these websites to learn more about rusty patched and other bumble bee conservation efforts and how you can get involved.