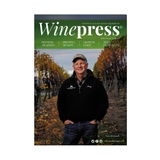 from Winepress - August 2020
by Winepress Magazine 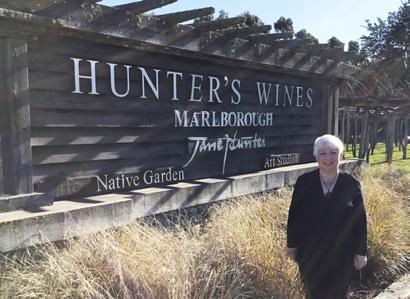 Wetland restoration no secret at Spy

THERE’S SOMETHING afoot at Area-H vineyard, as a single shriek rises from a deep green wetland, then ramps up to a squawking cacophony. Spy Valley viticulturist Adam McCone is unperturbed, strolling in to watch a ‘potter’ of pukekos gallivant in a pool of water, while others stand unsteadily – orange leggidly - on the branches above. “Since we have been doing pest trapping, the pukeko population has exploded, which is really, really nice,” says Adam. “There were hardly any when we started and now there’s a resident 30 or 40 pukekos.”

The 3 hectare Hillocks Rd wetland has been 17 years in the restoration, starting with a survey by the Marlborough District Council’s Significant Natural Areas team in 2003, before Spy Valley’s ownership. It was described then as one of the best examples of spring-fed wetlands left in the lower Wairau Valley, and the previous owners worked with council to clear choking willows before planting seedlings.

When Spy Valley took over the vineyard in 2012, there was still a lot to be accomplished, as speedy gorse and broom out-maneuvered slow-growing natives, says Adam. The wine company took up the challenge and established a pest trapping programme and working bees, where all staff turned up to fight the weeds and plant native seedlings, with assistance from the council. “It took us two years to get that under control,” says Adam. The trapping line now runs around the entire vineyard, with another ring around the wetland itself, and staff are delighted when they catch a stoat or ferret, he says.

In recent years they have commissioned an ecologist to source local seedlings of the mamaku tree ferns – extinct on the Wairau Plains - to plant at the wetland, where they once grew. They have also worked to restore a native nettle, sourced from a Rarangi wetland.

And the work is yielding impressive results, with harakeke (flax), tī kōuka (cabbage trees), kanuka and kahikatea thriving, not to mention those noisy pukekos. “It has flourished in the last 18 months or two years,” says Adam, over the din.

Operation Sustainable Weeds are proving a cheap workhorse at Spy Valley’s Area H vineyard, where they’re helping reduce vigour and vineyard costs. Viticulturist Adam McCone says the company stopped weed spraying and mowing as a trial in the 2018/2019 season. “We decided to let the weeds grow and see what would happen.”

The Hillocks Rd vineyard is in the Lower Wairau Valley, and the vines have high vigour, often requiring crop thinning to meet Spy’s yield expectations. So, the trial was to determine whether they could save cost and be more sustainable by having a lighter hand on the land.

The first season was “really dry” and the vines handled it well, he says. “And we have seen quite a few flow-on benefits.” The reduction in canopy growth allowed them to cut out a trim round, and shoot thinning was quicker due to fewer doubles, he says. They also dropped a pre-flowering leaf pluck at Area H because the canopy hadn’t densed up as it typically would, says Adam.

When they did do a leaf pluck, the canopy didn’t grow back as thickly as usual, meaning they didn’t require a second tidy-up round. That meant “significant savings”, he says. There are other contributing factors, but the company had approximately 20% reduction in its operating costs on the site, Adam says. That success

comes with a “few caveats”, he cautions, including the drop of crop load, with 1.5 tonnes per hectare less at Area H than at a similar Spy site in Grovetown. For companies looking for hefty crops, competition from weeds might not be the solution, but for Spy and this site, it seems to be fitting the bill, says Adam.

He notes that it requires a “different mindset” as far as aesthetics go, “and for a while I was quite concerned about it. But once you get your head around it… it sounds a bit cliché, but it seems a bit more alive - a bit less sterile without the weed spray strip.” And they’re learning along the way, in terms of individual sites, seasons and techniques, including sheep grazing in winter which makes the weeds far more tenable come spring.

In the season just past, Spy continued the trial at Area H and introduced it to the Waihopai vineyard, “which is lower vigour, so a bit riskier”, says Adam. That means the weeds are less rampant as well, but some blocks did struggle with the competition, he says. “It was a bit trial by error. For some blocks it worked really well, and in others it was too much for them. They just devigorated too much.” In those cases, they pulled back and did a weed spray. Going forward, Area-H will continue with the new management technique, while at the Waihopai Valley, Adam will pull back to running the trial on 70% of the vineyard, continuing to weed spray – although less often – on the two Sauvignon Blanc blocks and young Pinot Noir blocks that struggled.

They have had to learn new ways to water as well. “You have to be on the ball with your irrigation - turning it on earlier than what you normally would,” says Adam. That was a tough call, because they were also working to reduce water use “and you feel sometimes when you turn your irrigation on, you are feeding the weeds, as opposed to feeding the vines”. After seeking advice, he dropped the practice of watering for an hour or two every day, and instead sought deeper penetration, with a four hour soak every three days – sending water to the roots and bypassing the weeds.

Producing Vineyard for Sale or Lease

This story is from:
Winepress - August 2020
by Winepress Magazine