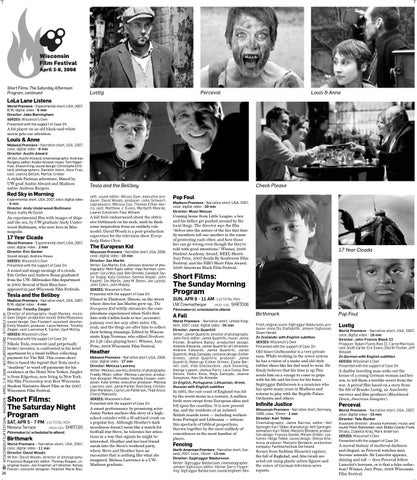 A bit player on an old black-and-white movie gets our attention.

An experimental film with images of ships and the sea, by UW graduate Andy Underwood-Bultmann, who now lives in Minneapolis.

A sound and image montage of a cicada. Eric Gerber and Andrew Rosas graduated from the UW–Milwaukee film department in 2005. Several of their films have appeared in past Wisconsin Film Festivals.

Tesla and the Bellboy

Nikola Tesla, renowed (and perpetually broke) inventor, is confronted in his hotel apartment by a timid bellboy collecting payment for The Bill. This comic short film is based the legend that Tesla used a “deathray” to ward off payments for his residence at the Hotel New Yorker. Ziegler is from Edgerton, now living in New York. His film Pinmonkey won Best Wisconsin Student Narrative Short Film at the 2007 Wisconsin Film Festival.

A kid feels embarrassed about the obtrusive birthmark on his neck, until he finds some inspiration from an unlikely role model. David Woods is a post-production supervisor for the television show Everybody Hates Chris.

Filmed in Elmhurst, Illinois, on the street where director Ian Martin grew up, The European Kid wittily chronicles the complications experienced when Neil’s first date with Caitlin leads to her (accurate) jealousy over her sexy older sister. Oh, yeah, and the thugs are after him to collect their betting winnings. Edited by Wisconsinite Kipp Norman, who edited Nerdcore for Life (also playing here). Winner, Jury Prize, 2008 Wisconsin Film Festival.

A smart performance by promising actor Jamie Parker anchors this story of a highschool outsider with a ill-advised crush on a popular boy. Although Heather’s dark moodiness doesn’t seem like a match for football star Steve, he tolerates her attentions in a way that signals he might be interested. Heather and her best friend sneak into the Steve’s weekend party, where Steve and Heather have an encounter that is nothing like what she imagined. Melissa Lawrence is a UWMadison graduate.

Coming home from Little League, a boy and his father get pushed around by the local thugs. The director says the film “delves into the nature of the lies that family members tell one another in the name of protecting each other, and how those lies can go wrong even though the they’re told with good intentions.” Winner, 2006 Student Academy Award; REEL Shorts Jury Prize, 2007 South By Southwest Film Festival; and the HBO Short Film Award; 2006 American Black Film Festival.

In 1965, the east coast of England was hit by the worst storm in a century. A million birds were swept from European skies and fell upon the coastline. It is now present day, and the residents of an isolated British seaside town — including workers from Portugal and Lithuania — witness this spectacle of biblical proportions, thrown together by the most unlikely of coincidences in the most familiar of places.

Old timer Guðmundur is a very private man. While working in the sewer system he has a vision of a snake and old-style rubber shoes like his dad used to wear. He firmly believes that his time is up.This sends him on a voyage to come to grips with his life and his love for his fence. Sygtryggur Baldursson is a musician who has spent many years in Madison and returns to play with the Reptile Palace Orchestra and others.

A shabby traveling man seeks out the house of a young German woman and her son, to tell them a terrible secret from the war. A period film based on a story from the life of Branko Lustig, an Auschwitz survivor and film producer (Blackhawk Down, American Gangster).

Scenes from Saddam Hussein’s capture, the fall of Baghdad, and Abu Graib are acted out using plastic action figures and the voices of German television news reports.