A Man of Many Hats self-described country boy who lives on a few acres outside of town, owns some farm animals, and enjoys being outdoors with his extended family, Randy Holland grew up in Jonesville and graduated from the Freedom Farm Christian School. He now holds the important position of Infection Control Officer at Hillsdale Hospital.

Randy says he never considered the medical field as a career when he was growing up. After graduation, he moved to Texas for 10 years where he worked for Kroger, and, when he returned to Michigan, took a factory job. His wife had always wanted to be nurse and enrolled in the TAP program at the hospital. While helping her study, he discovered his enjoyed the coursework and enrolled, too. After completion, he worked nights as advanced personnel in the hospital. “At first I worked wherever I was needed, and then I was the monitor tech so I was in the CCU constantly.”

In 2004 he began the prerequisite coursework for nursing school and received his associate degree in nursing from Kellogg Community College in 2010. Later that year he became the infection control officer at Hillsdale Hospital, receiving training from the head of laboratory services at Sparrow Hospital as well as doing a lot of self-education through the CDC and WHO. He joined the Association of Professionals in Infection Control & Epidemiology and in 2015 was certified in infection control practices through the Certification Board of Infection Control & Epidemiology which partners with the CDC for their testing process. This is a credential which is recognized globally.

Along with his infection control duties, Randy became the ER manager in 2014. He held the dual positions until mid-2016 when he left the Hillsdale area for two years to work as a travel ER nurse. After returning to the community, he resumed the infection control job as well as becoming director of ancillary services. Randy took on a third job from mid-2018 to mid-2020 when he oversaw environmental services.

The job of infection control officer involves a heavy work load of reviewing, recording, and reporting. Randy reviews all outpatient and inpatient cultures that go through the hospital lab including urinary, sexually-transmitted disease, blood, and wound to determine if anything communicable is present. For outpatient results, he reports as needed to the proper health agencies. For inpatients, he ensures that patients are informed, correct protocols are followed, and that the proper antibiotics are used where applicable.

Randy reviews all inpatient records daily and is required to report to the CDC monthly. He notes especially when things like central lines, Foley catheters, and ventilators are being used. For central lines and Foleys, daily assessments regarding need are

done, and ventilator settings are evaluated regularly. The skilled nursing facilities (Mc- Guire and MacRitchie units) are governed by different regulations than the inpatient beds, so Randy reviews those records daily in accordance with the relevant rules. He is also responsible for reviewing the records of all ER patients.

With the onset of COVID, Randy’s duties increased exponentially. Michigan established reporting requirements that meant daily input of the number of patients in the hospital, the number of patients per unit, specific supplies, staffing per unit, and a separate breakdown for COVID patients including number and vaccination status as well as the employees’ vaccination status. In addition, he must track COVID cases among the employees.

As research on the coronavirus progressed, there were weekly changes in what the hospital needed to do and in what data Randy needed to track and report. “For about the first six months, I’d get called at intervals around the clock as each shift reported in regarding the new cases. The data didn’t go into the system automatically, so I would get the new status reports and then update the health department.”

For all new hires, Randy checks for the required vaccinations that are necessary to work at the hospital and notifies the hospital when someone is ready to start.

Being on top of things is critical in infection control, and Randy checks the CDC and WHO information regularly so he knows what the hospital might have to cope with

in the future. While monkey pox cases were still confined to Africa, he was researching what to do. After it went beyond that continent, Randy immediately developed a policy and protocol for the hospital so if someone presented with symptoms that could be monkey pox, the staff would already know what steps to follow.

As director of ancillary services, Randy is the administrator over cardio-pulmonary, laboratory, radiology, and women’s health. The managers of each of these departments report to him. “We have awesome managers in all those departments,” he says. “They know how to do their jobs and they do them very well.” When the pain clinic moved to the third floor where his office is located, Randy became manager of that service, too.

One thing he is very excited about is the return of infusion services to Hillsdale Hospital— so much so that he volunteered to take responsibility for that roll-out and ensured that everyone involved was ready to go. With Randy’s leadership, Hillsdale Hospital’s Center for Infusion Care opened on September 12.

Clearly, Randy does not find time hanging heavy on his hands during the work day. But he handles it all with commitment, care, and dedication. A man of many hats, indeed! 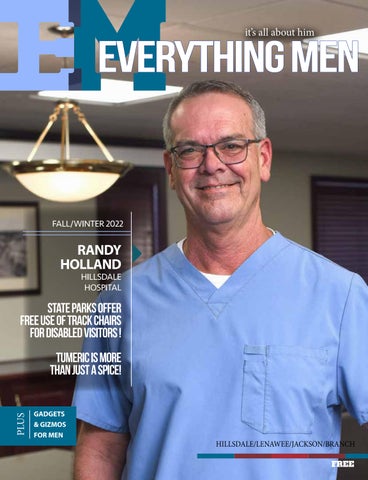