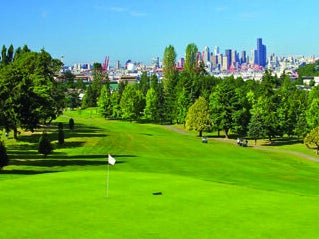 Ready for something new in Northwest golf? How about a Friday-Saturday professional tournament?

The Suquamish Clearwater Legends Cup, presented by the Boeing Company, with LPGA veterans age 45 and over, has been moved to the Friday-Saturday dates of June 7-8 after originally being scheduled for the weekend.

The date change is intended to accommodate golfers who want or need to attend the World Golf Hall of Fame induction dinner at Pebble Beach, Calif., on Sunday.

One such participant is Jan Stephenson, who will enter the Hall alongside Retief Goosen, the late Peggy Kirk Bell, former Masters chairman Billy Payne and paralyzed trick-shot clinician Dennis Walters.

The tournament’s title merits explanation. Suquamish is the tribe that owns White Horse Golf Club outside Kingston, where the event will be played. Clearwater is the tribal-owned casino located on Agate Pass just across the bridge from Bainbridge Island. Legends refers to the Legends Tour, the official senior division of the LPGA.

Last year’s inaugural event at White Horse was won by England’s Trish Johnson, who finished 8-under par with a 66-70-136. Johnson had the shot of the tournament in the final round, when she bent her 100-yard second shot at the par-4 fifth hole around a stump and had it stop two feet from the pin.

that is hard to replicate,” Johnson says. “You also get a little bit more attention, and as professional golfers we all crave that limelight. It never gets old.”

According to Sue Fracker, director of marketing for the Legends Tour, the tournament is expanding this year from 30 to 36 golfers, and the purse is being boosted from $175,000 to $200,000. Golfers who have committed to play include Stephenson, Johnson, Juli Inkster, Hollis Stacy, Jane Blalock, Liselotte Neumann, Rosie Jones and Michelle McGann. Suzy Whaley, the first female president of the PGA of America, also is entered.

Stephenson, 67, appeared at the Seattle Golf Show to promote the tournament. Asked what hole on the course is her favorite, she replied No. 18, which has an elevated tee and water down its left side. Fans on the patio outside the clubhouse get an excellent view.

“I just love that hole,” she said, adding that, “It almost needs to be a par-5.” Johnson also has a soft spot for White Horse. “What struck me every day was how gorgeous the area was,” she says. “The view over the water each morning was spectacular, and the drive to the course was so pretty, with a truly fabulous golf course at the end of it.”

“I’m also looking forward to seeing all the people who made the tournament possible last year,” she adds. “They are a great bunch of people, so enthusiastic and friendly. I felt very welcome at White Horse.”

Asked how golf is changing, the Australian-born Stephenson said the quest for length off the tee has become paramount at all levels of golf.

“Golf has become a power game,” she said. “You used to say, ‘Drive for show and putt for dough,’ but that’s not true anymore. You want to hit it as far as you can. It doesn’t matter if it’s crooked. You’ve got to hit it a long way.”

One-day admission is $20 and two-day admission is $30. On most holes, fans will be permitted to walk on the fairway behind the golfers they are following. Shuttles will be available from Kingston and Winslow to transport fans who walk onto ferries rather than take their cars.

The Kaiser Permanente Women’s Amateur Team Scramble will be Wed., June 5, and the entry fee is $125 per player. The format is a two-woman scramble with a shotgun start at 9 a.m. The low-gross and low-net twosome winners will team with a pro in the Pro-Am the next day. If you don’t win your way in, you can still play in Thursday’s Pro-Am, where foursomes will be paired with a Legends pro. The foursome entry fee is $7,500.

Some of the Suquamish tournament proceeds will benefit the American Diabetes Association Camp Sealth on Vashon Island, and the Burned Children Recovery Foundation.

To learn more, or to buy tickets, visit the tournament website at www.clearwaterlegendscup.com.

This story is from:
Cascade Golfer — April 2019
by Varsity Communications