from Kauai Traveler
by Traveler Media 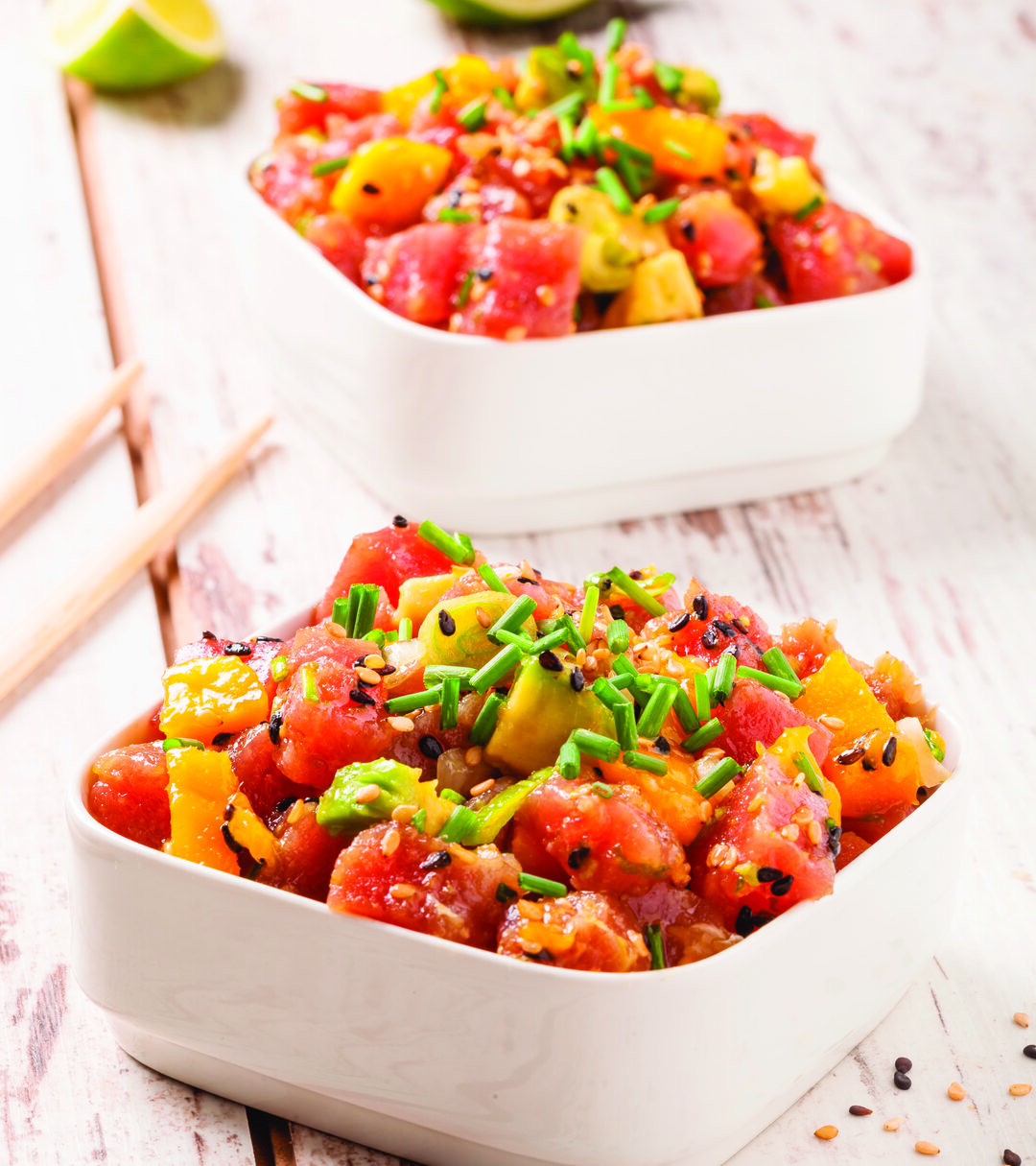 Growing the vine divine on the Garden Isle

It is the kind of story that one imagines about paradise. Lisa Parker and Roland Barker, husband and wife, are co-owners of Tiny Isle, a sweets company, and their more recent enterprise, The Vanillery of Kauai. The Vanillery supplies their homemade vanilla extract to their chocolate products. How their story with vanilla began resembles something one would read in an old-fashioned children’s fairy tale book. Over many decades ago, likely in the 1960s, a vine was planted on the mauka (mountain) side of Kapa‘a on the east side of Kaua‘i. Whether she knew it at the time, the auspicious gardener was making a gift to future generations. Some 14 years ago, Lisa and Roland came to Kaua‘i with the idea of caring for the land his grandmother had passed on to the family, the same woman who likely had planted the “vine divine.”

Roland describes his grandmother, “She was an avid gardener, loved gardening in the tropics and would have enjoyed something exotic like vanilla.” Having thrived in isolation, Roland estimates about 30 years, the vine growing up a tree was discovered by the new caretakers of the land. Unfortunately, at least at first, Lisa and Roland “knew nothing about how to propagate the plant.” Still, they followed their instincts. He says, “...we placed lengths of vine under several trees to see where it liked to grow.”

After finding “a spot where it started to flower,” the happy gardeners set their hearts on producing vanilla, a dedication that turned into a shade-covered area populated with climbing trellises and cuttings from the grandmother’s start and one from Maui. Thus, The Vanillery of Kauai came in to being.

Coincidentally, their entrée into the world of vanilla came at a time when vanilla producers were facing hardships elsewhere. Tropical Cyclone Enawo, in March 2017, destroyed 30 percent of Madagascar’s vanilla production, which had in the past supplied up to 80 percent of total global production. Meanwhile, deforestation in Mexico has affected the original area in which vanilla was produced and is home to the only bee in the world, the melipona, that pollinates Vanilla planifolia, the species that gives us the spice. As a result, the BBC (British Broadcasting Corporation) has noted, along with numerous other sources, that vanilla has become more expensive by weight than silver. It is the second most expensive spice after saffron. Initially, the culinary couple had planned to market their vanilla extract but found it was more cost-effective to reserve the extract for the live vegan fudge, chocolate truffles and chocolate toasted macadamia butter they make and sell through their company, Tiny Isle. Their vanilla pods are offered for sale and are being purchased by chefs and Kauai Juice Co on island, and sold online.

Although the vine likes to grow, the plant will not produce vanilla pods unless the vanilla orchid is pollinated, a situation that presents several challenges on the Garden Island. The only bees that pollinate vanilla, the melipona, are in Mexico and in danger of facing extinction. However, in 1841, Edmond Albius, a slave on the island of Réunion, discovered an effective way of self-pollinating vanilla. His discovery at the age of 12, was celebrated in the 1998 documentary film, “Edmond Albius, l’esclave prodige” (prodigy slave) long after he had died, in 1880, a free man without ever having reaped the profits of his invention. Roland describes how self-pollination manually imitates what the bees do, “They go in, getting some pollen on their backs as they do so; then, when they back out, the flower opens a special one-way flap that reveals the pollen receptor, and the transfer is made.” The pollinating season is labor-intensive, requiring attention to the plants every morning during a three-month period. According to Roland, “You have to get out there and get it done before noon because the flowers start to close.” Once the flower closes, it falls off the vine, and the opportunity is missed.

With successful pollination of the orchid flower, the plant will produce vanilla pods, also commonly known as vanilla beans. According to Lisa, the pods may be ready to harvest as early as February and continue to ripen as late as June. The length of the harvest season means that “pollinating and harvesting are happening simultaneously.” A peak experience of growing vanilla occurs during the harvest. Roland reveals a surprise only accessible to those who gather the pods: “Interestingly, when the ripe, unopened pods are harvested, they give off a lovely floral scent that is quite different from the familiar mellow aroma of vanilla. Only someone who is harvesting and curing vanilla will ever smell that, although we are thinking of ways to capture it.”

Other stages of production that lead to the flavor and scent we know as vanilla follow the harvest. Boiling, fermentation and dehydration are parts of the curing process required to bring forth the delightful qualities we associate with vanilla. When asked about the most rewarding thing about growing vanilla, Roland does not hesitate to say, “Well, of course, it’s the cured vanilla, which when you get it right has such an amazing aroma.” He continues, “So, it’s very rewarding after all that work and figuring out how to do it right to get something so wonderful.” And, the wonder has only just begun. As avid cooks, the vanilla connoisseurs have found a variety of uses for the spice worth more than its weight in silver, from keeping a whole bean in a coffee pot that infuses the flavor of their coffee for several weeks to incorporating vanilla into savory sauces. Roland elaborates,“It doesn’t take much, but a little piece of bean or some of the “caviar” gives an aromatic dimension to pan sauces.” He points out that although we tend to think of the aroma of vanilla as delicate, “it really comes through even in the most strongly flavored dish.” He likes to use vanilla in hot sauces as “it serves to smooth out the flavor and give it a sweet note.” Roland continues to say, “It works especially well with habanero sauces, which we always have since those peppers grow so well here.”

The way the scent of vanilla spreads its deliciousness far and wide reminds me of a Hawaiian saying. Serge Kahili King, former resident of Kaua‘i and respected healer, mentions a Hawaiian proverb in his 2008 book, “Huna: Ancient Secrets for Modern Living.” The proverb, Ukuli‘i ka pua, onaona i ka mau‘u (Tiny is the flower, yet it scents the grasses around it), refers to the power in small things. The worldwide influence of vanilla, the fragrance and taste that delights our childhood and adulthood, begins with a beautiful orchid flower prone to closing before it realizes its potential.

We sell vanilla by the ounce on our website, and so when you make extract from that, you know you are getting the right ratio. For instance, 1 ounce by weight of vanilla beans will make 10 ounces by volume of extract. We use good quality vodka, slit the beans and chop them a little so they fit into the bottle. It is best to use a dark-colored bottle. Put the date on it because that extract needs to sit for at least two months before you use it. Really, it’s best to wait six months to get the best flavor and aroma. It’s also a good idea to swirl it around in the bottle once in a while as it ages. If you don’t want the alcohol, you can take your finished extract and heat it gently, no more than 180 degrees Fahrenheit, until the alcohol smell is gone. Then, mix in pure food-grade glycerine (4 ounces for 10 ounces of extract) to replace the lost alcohol and stabilize it. You’ll need to refrigerate after that.

For more information or to purchase their delicious products, visit https://tinyislekauai.com/fudge, or https://vanillery.com.

This story is from:
Kauai Traveler
by Traveler Media