Nonprofit horses around with reading program

When Terry Holmes-Stecyk’s miniature horses aren’t taking a quick swim in a nearby swimming pool to cool off amid tripledigit temps, they’re Zooming with children worldwide.

“They’re not cooperative little actors all the time,” Holmes-Stecyk said of her horses. “But, fortunately, they’re good little kids.”

Holmes-Stecyk is the founder of Tender Little Hearts Mini Tales and Equine Mini Therapy, a Scottsdalebased, equine-assisted non-profit that offers a literacy promotion program where young readers can read to mini horses – and Holmes-Stecyk’s one donkey – at libraries and schools.

When COVID-19 hit, however, and senior facilities and libraries closed their doors to all reading sessions and assisted equine therapy visits, Holmes-Stecyk didn’t temporarily suspend the program.

She dressed the mini horses and donkey in their best, on-camera attire and went virtual.

Tender Little Hearts’ virtual Mini Tales reading program allows kids to read to the mini horses – Mazy, Dolly and Boone – either via the 10-minute video on the non-profit’s website or via live one-on-one Zoom readings.

“This unique experience is intended to build confidence in young readers because, after all, a diminutive equine isn’t going to pass any judgement but will simply ‘listen,’” Holmes-Stecyk said.

Since the virtual offering launched at the end of June, the video has been viewed more than 1,000 times by children in Scottsdale and beyond.

Not only has the video reached readers in Dubai and Saudi Arabia, but “Cross

Zach Bertilson reads to his 3-year-old son, Caleb, while the Tender Little Hearts’ Mini Tales “Read to a Mini” video plays on the laptop.

nore School & Children’s Home in North Carolina, an in-home school for Appalachian children and at-risk children, have picked it up and are using it in their cottage,” Holmes-Stecyk said.

Kids have told Holmes-Stecyk that they not only like watching the mini horses as they read, but that it’s also an easy, fun way for them to get in their required

“As a homeschool parent of three kids 7 and under, there’s a lot of juggling involved. Tender Little Hearts Read to a Mini program is a fun and helpful resource for kids and parents, to promote independent reading in an interactive way.”

“As a homeschool parent of three kids 7 and under, there’s a lot of juggling involved,” said Sarah Toy of Rio Verde Foothills. “Tender Little Hearts Read to a Mini program is a fun and helpful resource for kids and parents, to promote independent reading in an interactive way.”

The video – which is also available for viewing on Maricopa County’s library system, where it’s viewed an average 30 times a day – is intentionally 10 minutes long.

“We purposely created it for 10 minutes so that it would reach a broad group of people or children,” HolmesStecyk said. “They say one minute of reading per age is about average. So, 5-, 6-year-olds are the younger readers – up to 10.”

The live Zoom readings and therapy sessions, on the other hand, allow for a more one-on-one, personal experience.

So far, Holmes-Stecyk has booked 10 live Zoom sessions, which are typically 25 minutes long.

“It was just neat for them to be able to actually see the mini again and do a little bit more one-on-one, and they can ask questions,” she said.

In addition to offering the video and Zoom readings, Holmes-Stecyk has welcomed visitors to the mini horses’ Scottsdale home, where families can come pet and groom the minis.

“They walk the minis. They read to the minis. We have done just a handful of one-on-ones where we’ve actually allowed a family to come themselves as a family unit,” she said. “Of course, we completely disinfect all of the brushes and everything afterwards. So, we have allowed a little of that to give the horses that socialization.”

Of course, Tender Little Hearts can’t wait to return to schools and libraries, including TK, where they were welcomed once a month per venue.

“We had 600 children at Desert Willow Elementary School [a collaborative effort with children’s book author, Claudine Song] that participated, and we’d love to be able to go back,” Holmes-Stecyk said.

“I think now having this virtual reading program is going to hopefully promote them to want to read a book to the miniature horses themselves,” she added.

Tender Little Hearts will keep the 10-minute video up on their website indefinitely.

The team is also working on creating read-along videos, where the mini horses or the donkey will read the story.

The split-screen video will show the horse or donkey reading on one side and the text on the other, so kids can read along.

“I see that going even further, especially with the younger readers and maybe even children where English is a second language and being able to hear the word, the phonemics of it, and read along with them,” Holmes-Stecyk explained. “We’re excited about that.”

They hope to launch it within the new few weeks.

Tender Little Hearts Mini Tales and Equine Mini Therapy was founded in March 2019 after a similar non-profit, Mobile Minis, moved their facility to Pennsylvania in 2016.

Holmes-Stecyk was a volunteer for said non-profit.

Kids can read to Tender Little Hearts’ Mini Tales miniature horses — Mazy, Dolly, and Boone — either via the 10-minute video on the non-profi t’s website or via live Zoom readings, like Boone is seen here doing.

back?’ So, I decided to incorporate and offer that again,” she said.

The nonprofit also provides assisted therapy activities for a wide range of people, from children and adults with special needs, development issues or

“The reasons they are such wonderful therapy animals is because they do want to engage with a human; and they’re also very curious animals,” Holmes-Stecyk explained. The non-profit’s therapy animals are qualified through the Miniature Equine Therapy Standards Association and American Miniature Therapy Horse Organization and registered as therapy animals with Register My Service Animal.

The same month the virtual offerings launched, Holmes-Stecyk was honored by the Arizona State Society Daughters of the American Revolution for Outstanding Service by a Chapter Member in Literacy Promotion.

She was also the first-place winner of both the National Society Daughters of the American Revolution (NSDAR) Southwest Division and first place as the National winner of NSDAR’s Literacy Promotion Contest.

Together we are… Optimistic 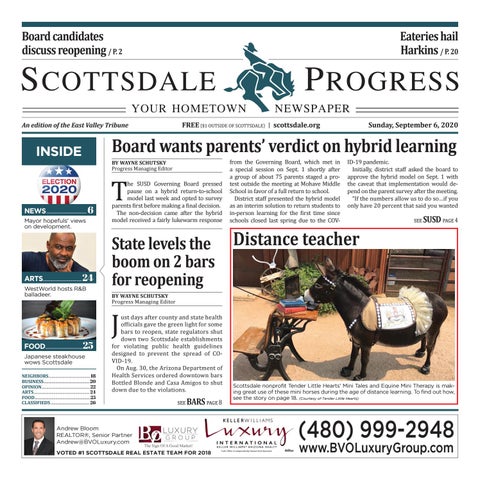