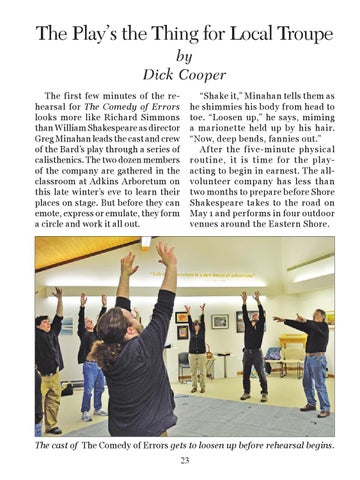 The Play’s the Thing for Local Troupe by Dick Cooper The first few minutes of the rehearsal for The Comedy of Errors looks more like Richard Simmons than William Shakespeare as director Greg Minahan leads the cast and crew of the Bard’s play through a series of calisthenics. The two dozen members of the company are gathered in the classroom at Adkins Arboretum on this late winter’s eve to learn their places on stage. But before they can emote, express or emulate, they form a circle and work it all out.

“Shake it,” Minahan tells them as he shimmies his body from head to toe. “Loosen up,” he says, miming a marionette held up by his hair. “Now, deep bends, fannies out.” After the five-minute physical routine, it is time for the playacting to begin in earnest. The allvolunteer company has less than two months to prepare before Shore Shakespeare takes to the road on May 1 and performs in four outdoor venues around the Eastern Shore.

The cast of The Comedy of Errors gets to loosen up before rehearsal begins. 23