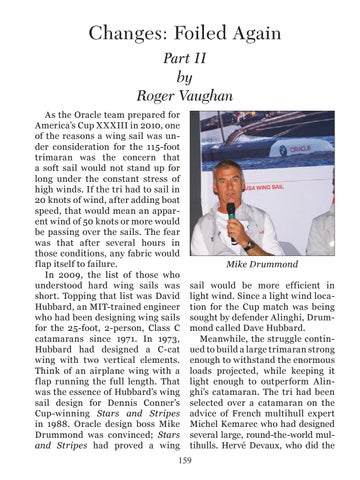 Changes: Foiled Again Part II by Roger Vaughan As the Oracle team prepared for America’s Cup XXXIII in 2010, one of the reasons a wing sail was under consideration for the 115-foot trimaran was the concern that a soft sail would not stand up for long under the constant stress of high winds. If the tri had to sail in 20 knots of wind, after adding boat speed, that would mean an apparent wind of 50 knots or more would be passing over the sails. The fear was that after several hours in those conditions, any fabric would f lap itself to failure. In 2009, the list of those who understood hard wing sails was short. Topping that list was David Hubbard, an MIT-trained engineer who had been designing wing sails for the 25-foot, 2-person, Class C catamarans since 1971. In 1973, Hubbard had designed a C-cat wing with two vertical elements. Think of an airplane wing with a f lap running the full length. That was the essence of Hubbard’s wing sail design for Dennis Conner’s Cup-winning Stars and Stripes in 1988. Oracle design boss Mike Drummond was convinced; Stars and Stripes had proved a wing

Mike Drummond sail would be more efficient in light wind. Since a light wind location for the Cup match was being sought by defender Alinghi, Drummond called Dave Hubbard. Meanwhile, the struggle continued to build a large trimaran strong enough to withstand the enormous loads projected, while keeping it light enough to outperform Alinghi’s catamaran. The tri had been selected over a catamaran on the advice of French multihull expert Michel Kemarec who had designed several large, round-the-world multihulls. Hervé Devaux, who did the