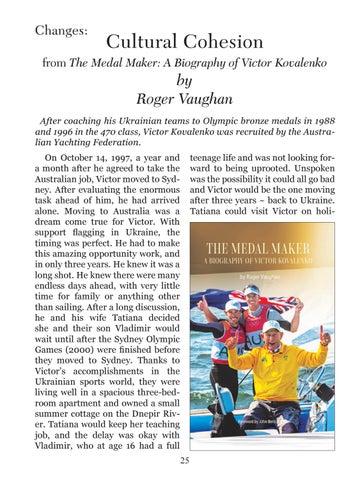 from The Medal Maker: A Biography of Victor Kovalenko

by Roger Vaughan After coaching his Ukrainian teams to Olympic bronze medals in 1988 and 1996 in the 470 class, Victor Kovalenko was recruited by the Australian Yachting Federation. On October 14, 1997, a year and a month after he agreed to take the Australian job, Victor moved to Sydney. After evaluating the enormous task ahead of him, he had arrived alone. Moving to Australia was a dream come true for Victor. With support flagging in Ukraine, the timing was perfect. He had to make this amazing opportunity work, and in only three years. He knew it was a long shot. He knew there were many endless days ahead, with very little time for family or anything other than sailing. After a long discussion, he and his wife Tatiana decided she and their son Vladimir would wait until after the Sydney Olympic Games (2000) were finished before they moved to Sydney. Thanks to Victorâ&amp;#x20AC;&amp;#x2122;s accomplishments in the Ukrainian sports world, they were living well in a spacious three-bedroom apartment and owned a small summer cottage on the Dnepir River. Tatiana would keep her teaching job, and the delay was okay with Vladimir, who at age 16 had a full

teenage life and was not looking forward to being uprooted. Unspoken was the possibility it could all go bad and Victor would be the one moving after three years ~ back to Ukraine. Tatiana could visit Victor on holi-