Breaking Out at MAC 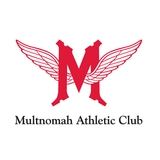 from The Winged M, January 2020
by Multnomah Athletic Club

Stars, stripes, swooshes and springing pumas – sneaker logos are symbols of motion, and tonight they explode across the floor of Studio One. Flat-soled athletic, leisure and skateboard shoes make for the best breaking gear because they allow the dancer to stop, pivot, turn and, if they’re smooth enough, slide.

It’s a far cry from the old-school dress code that used to define MAC dance classes — when all club dancers had to, at the very least, wear tight black pants, blue shirts and black jazz shoes.

You can’t get funky in those clothes,

says hip hop instructor Melissa Nornes. “I can’t. I don’t know how anyone can. The bending of the knees, the attitude, the posture is a lot different, and if you don’t change your clothes between jazz and hip hop class, you’re just not going to be in the right mood. If I’m not wearing the right clothes or shoes, it doesn’t feel right.”

For those not versed in the intricacies of dance terminology, the differences between hip hop – spelled without the hyphen in dance circles –—and breaking might not be immediately apparent. Rest assured, though, they are very different disciplines. Muddying the waters is the fact that “Hip-Hop” as a cultural movement is often said to have four primary pillars: Rapping or MCing, DJing, graffiti and B-boying, otherwise known as breakdancing.

Confused yet? Fortunately, MAC has instructors so steeped in the traditions of dance and music alike that they can help offer clarity. Before stepping to club classes, keep reading to learn more about how these relatively recent forms have changed not only MAC, but the world of dance as a whole.

Who’s the man? When it comes to B-boying at MAC, his name is Cameron Dupon. Seven years ago, he joined the club’s dance department, inheriting a fledgling program primed for growth.

I was thinking, ‘How would a breakdancing program work here at MAC, what could it look like, and how might it be accepted?

he recalls. “After meeting with a lot of the parents and students, my feeling was, ‘This is something that’s needed here!’”

“A lot of times, you see the narrative that ‘Hip-Hop can change lives for students of color and people who are disenfranchised,’ but it can actually help students who have so-called ‘good upbringings’ or are ‘privileged’ or whatever. Breakdancing is universal!”

Dupon says he’s found MAC families to be very accepting of his background as a performer and somewhat unconventional teaching style. This is backed up by increasing enrollment in breakdancing classes, which has in turn led to additional offerings. “It went from two classes to four, one teacher expanded to two teachers, and I’m hoping we can take it even further,” Dupon says.

Nornes was here when the first MAC breakdancing class was offered, and explains that it expanded club offerings in a very specific and important way. “We could not get boys to dance here! So, at first Laura Haney decided breakdancing should be a boys-only class, and it became insanely popular. When Cameron came, it got better because he was more involved. He decided we needed to split it up and offer different levels, because by that point, we had so many guys.”

Every summer, Nornes teams up with Dupon to teach hip hop and breaking together, and that merging of classes has not only helped to grow enrollment, but also created crossover between the two disciplines and beyond. “The classes have grown immensely in size. Right now, there’s a cap of around 30 kids in my hip hop class, but we always have 35 or 40 for recital. We’re seeing guys taking hip hop, but they’re also doing tap, which is crazy and awesome because we’ve never had that before,” she says.

At this point in time, it’s difficult to separate Hip-Hop and mainstream culture, the two have become so intertwined. Watch a Blazers game, and you’ll see moves employed by their dancers. Top-40 charts are filled with rap music, every level of fashion bears its influence, and even pop country artists employ drum machines, auto tune and guest MCs when they want to get a crossover hit.

Similarly, in the 14-plus years since the reality TV competitions “Dancing with the Stars” and “So You Think You Can Dance” debuted, the art form as a whole has re-entered the popular consciousness in a way it might not have been present since Dance Fever went off the air in 1987.

“This year is the first time a B-boy won “So You Think You Can Dance.” He had no other training, but the choreographers just took him under their wing. He was so strong at what he does, and so gifted with his breakdancing moves,” Nornes says, referring to show’s champion, Bailey Muñoz.

“When I first started at MAC, those shows were only a couple of seasons in, so it wasn’t as ubiquitous,” Nornes says. “Now, everybody’s seen them, everybody knows about dancing, and people aren’t as afraid of it as they might have been. They’re like, ‘I want to try that!’”

As lines between underground and mainstream, fine art and primetime have blurred, so have dance styles. Contemporary dance, Nornes points out, is loosely a combination of ballet and jazz. “People started doing that with hip hop, too, mixing in lyrical dance to create lyrical hip hop.” Even so, she says there are important distinctions between hip hop and breakdancing.

Hip hop dance evolved out of jazz and funk styles, as well as borrowing the attitude from popping and locking and other street styles of the 70s and 80s. At its heart, though, it maintains a connection to classical traditions, approaches and choreography. Hip hop dance also can be done to just about any kind of music, despite its name.

Much like the rap freestyle, or improvised lyrical flows, breakdancing is built upon the base of in-the-moment invention. B-boys use the energy of previous movements, react to changing rhythms, and channel personal styles into something that is fresh and unpredictable every time.

“The thing about breakdancing is that it’s been influenced by almost every other type of dance,” Dupon explains. “There’s ballet, contemporary, gymnastics, and even moves lifted from karate movies. Nowadays, we’re seeing the flip side of that, with other forms of movement and dance incorporating breaking influences. Gymnastics recently started accepting the air flare, which is a move that was created in breakdancing.”

Much like Hip-Hop music, B-boying is more than just the sum of its parts. Its synthesis of other styles has given birth to a vocabulary of moves all its own, and perhaps even a philosophy. “With ballet, you have a set foundation, and if you break from that foundation, you’re not doing ballet anymore. Whereas in breakdancing, you get rewarded for being original and doing moves that are not necessarily on track with what everybody else is doing,” Dupon says.

“If you mess up, you might be able to make a move from that mistake. It’s a unique style that allows you fall into another movement and create this whole new thing.”

Dupon believes that breakdancing is valuable for any student of the larger art form, and particularly those interested in choreography. “It is going to add to their overall dynamic style when it comes to movement, and set them up for success on the stage.”

Speaking of, he says that his ultimate goal with MAC’s program is to not only expand it in terms of club offerings, but also in regards to performance opportunities for his students. “Our Crew-level dancers will travel out to local events and compete in those competitions, or just jump into circles, or cyphers. We have our ears to the ground for any competitions coming to the Portland or Washington area. But we also want to go to California and see the street teams in Venice or travel to New York for the Rock Steady Crew anniversaries they have every year.”

“Dancing is a language, and breakdancing has its regional dialects. We’d love to travel nationally, learn more and represent the club, but that’s the next level.”

For now, he’s happy with what he’s helped to build at MAC, and looks forward to continuing to work with Nornes and other teachers and students to expand perceptions — and practice — of what breaking can be. “Breakdancing is one of those styles that allows the individual and group of dancers to be really creative. As much as it’s been influenced, it’s influencing other styles of dance, as well. The future is wide open.” WM

This story is from:
The Winged M, January 2020
by Multnomah Athletic Club