from The Rock Sept 2020
by Journeyman Publishing 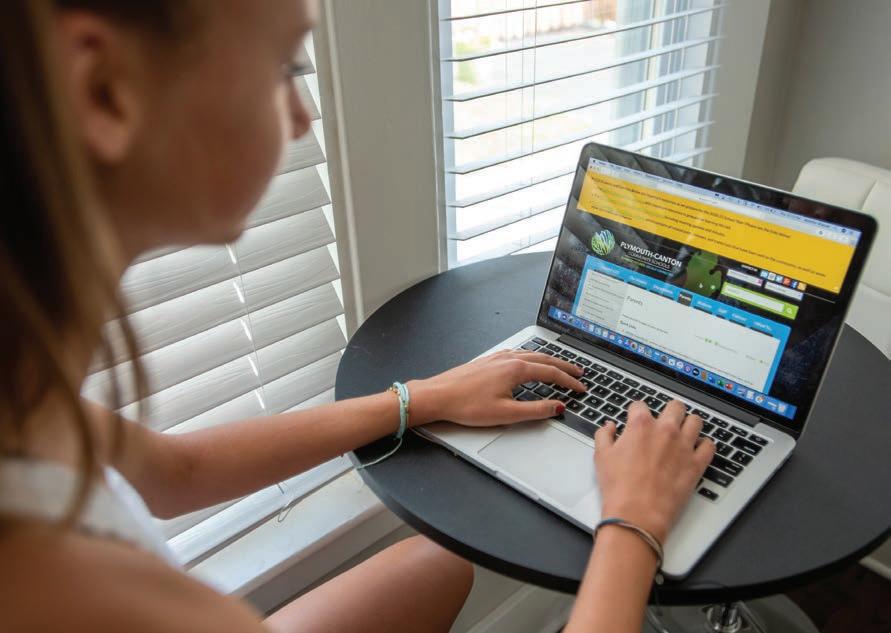 It’s Not Exactly Back To Schoo...

A lifelong Plymouth resident and fixture of the city’s arts and sports landscape has been honored with the city’s first-ever award for an outstanding citizen.

Debra Madonna has been awarded the inaugural Ruth Huston-Whipple Award for Civic Engagement for her dedication to making Plymouth a better place to live and work in.

Plymouth City Commissioner Kelly O’Donnell said the award is the first of its kind for the city. The Kiwanis Club has the Plymouth Hall of Fame, but the city itself never had an award to recognize a specific citizen for positively and consistently working to better the community.

Nominees for the award must have a track record of civic and/ or philanthropic engagement in the city. According to the stated rules, “examples of impact should show service to the community, delivered with integrity and perseverance.”

O’Donnell said Madonna was a shoo-in for the inaugural award.

“She’s great, she has a real dedication to the community,” O’Donnell said. “She’s left her mark on a lot of organizations in the city. She’s helped children and she’s making the community a better place.”

Specifically, she’s been in several community organizations around town. She has been on the board of the Plymouth Community Arts Council, started the Wednesdays in the Park children’s music program and helped start the Miracle League of Plymouth, which built a ball diamond and provides baseball for special needs children. Madonna was quick to say it was a program she and a friend took over from another service organization.

“There was a program under the Plymouth Rotary Club, Bob Bilkie and I got it going on its own,” she said. “I’ve always been fortunate to work with the people I have, with the city commission and city employees. They’re really nice people.”

Madonna served with Bilkie, a local businessman, in the Plymouth AM Rotary together. After they learned about a special needs baseball league in Georgia called The Miracle League, they thought it was something that would be welcomed in the Plymouth community.

Bilkie’s wife, Shari, also worked hand in hand with Madonna beginning in 2009 on the project. She said Madonna -- and all the volunteers -- put in “lots of hard work and determination” to create The Miracle League of Plymouth, which offers a game day experience for the players.

During each Miracle League game, every player, aided by a “buddy” (a parent, friend, or local volunteer), gets to hit the ball and score a run. It’s an inspiring place for both the kids and all who attend.

“Deb’s achievements and success are not by accident. The amount of time, effort and dedication that she puts forth in everything that she does is truly inspiring,” said Shari Bilkie, noting she is proud to call Madonna a friend.

Madonna, a near lifelong resident of Plymouth, said lately she has been learning about Ruth Huston-Whipple, the namesake of the award. A 1913 graduate of Plymouth High School, where she went on to become a teacher,

A friend of hers, a high school teacher, had tried to get a school named for her a few years back. For some time now, Madonna has been reading Huston-Whipple’s teenage diaries.

“She was a suffragette in the eighth grade,” she said. “She started the historical museum, she was involved in cultural activities and Wayne County government. She did a little bit of everything.”

She said she, like Huston-Whipple, grew up seeing what could be done based on the example of people in town—people who saw something that needed doing and did it.

Ironically, both Huston-Whipple and Madonna suffered debilitating strokes. In fact, Madonna wrote a book about her own stroke, and is waiting for it to go through some editing.

“Two years ago I had a stroke that affected my right side,” Madonna said. “I couldn’t walk, my speech was garbled, but I could understand everything.”

Her professional background, coincidentally, was occupational therapy. It gave her a unique perspective on what stroke sufferers need. Not only was she comfortable in a hospital setting (which she said a lot of people aren’t), but she had the large support group needed to deliver useful care when she needed it.

“My husband would tell me at the end of the day about something that was getting better, something small,” she said. “Which is what you need to hear, you did something small. Someone might say “oh, you did great today” when you know you didn’t do great.”

Nominations for the second Annual Ruth Huston-Whipple award will be accepted Jan. 1 through April 30, 2021. Nominees must have contributed to the city above and beyond reasonable expectations, demonstrated character, commitment and/ or leadership qualities, been an active participant in community organizations focused within the city and have made contributions to the economic vitality and/ or quality of life there. Married couples may be nominated for the award but current members of the city commission and city employees are not eligible. The winner will be named in May.

This story is from:
The Rock Sept 2020
by Journeyman Publishing