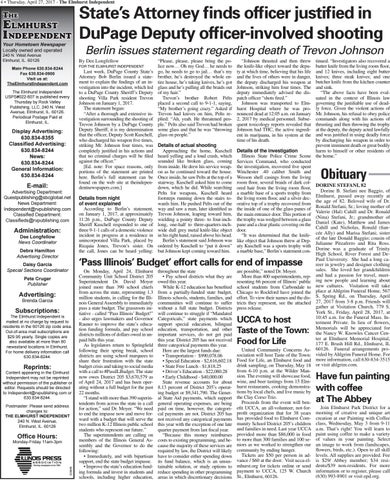 The elmhursT IndependenT Your Hometown Newspaper Locally owned and operated

By Dee Longfellow FOR THE ELMHURST INDEPENDENT

Last week, DuPage County State’s Attorney Bob Berlin issued a statement to explain the findings of an investigation into the incident, which led to a DuPage County Sheriff’s Deputy shooting Villa Park resident Trevon Johnson on January 1, 2017. The statement began: “After a thorough and extensive investigation surrounding the shooting of Trevon Johnson by a DuPage County Deputy Sheriff, it is my determination that the officer, Deputy Scott Kuschell, who discharged his weapon five times, striking Mr. Johnson four times, was completely justified in his actions and that no criminal charges will be filed against the officer.” [Ed. note: For space reasons, only portions of the statement are printed here. Berlin’s full statement can be found on the web site at theindependentnewspapers.com.] Details from night of event explained According to Berlin’s statement, on January 1, 2017, at approximately 11:26 p.m., DuPage County Deputy Sheriff Kuschell responded to one of three 9-1-1 calls of a domestic violence incident in progress at a residence in unincorporated Villa Park, placed by Ricquia Jones, Trevon’s sister. On the call, Jones can be heard yelling:

“Please, please, please bring the police now… Oh my God… he needs to go, he needs to go to jail… that’s my brother, he’s destroyed the whole entire house, he’s taking knives, he’s got glass and he’s pulling all the braids out of my hair.” Trevon’s brother Robert Pelts placed a second call to 9-1-1, saying, “My brother’s going crazy.” Asked if Trevon had knives on him, Pelts replied: “Ah, yeah. He threatened people.” Pelts also said Trevon had broken some glass and that he was “throwing glass on people.” Details of actual shooting Approaching the home, Kuschell heard yelling and a loud crash, which sounded like broken glass, coming from inside. He drew his service weapon as he continued toward the house. Once inside, he saw Pelts at the top of a stairway. Kuschell asked him to come down, which he did. While searching Pelts for weapons, Kuschell heard footsteps running down the stairs towards him. He pushed Pelts out of the way and saw a man, later identified as Trevon Johnson, leaping toward him, wielding a pointy three- to four-inchlong, one-half to three-quarters-inchwide dull grey metal knife-like object in his right hand, raised above his head. Berlin’s statement said Johnson was ordered by Kuschell to “put it down” but Johnson kept coming toward him.

tinued. “Investigators also recovered a butter knife from the living room floor, and 12 knives, including eight butter knives; three steak knives; and one butcher knife from the kitchen counter and sink. “The above facts have been evaluated in the context of Illinois law governing the justifiable use of deadly force. Given the violent actions of Mr. Johnson, his refusal to obey police commands along with his actions of thrusting and then throwing the trophy at the deputy, the deputy acted lawfully and was justified in using deadly force by discharging his weapon in order to prevent imminent death or great bodily harm to himself or other residents of Details of the investigation Illinois State Police Crime Scene the home.” Services Command, who conducted the investigation, recovered five spent Winchester .40 caliber Smith and Wesson shell casings from the living room floor, several braids of dark colored hair from the living room floor, DORINE STEFANI, 82 Dorine B. Stefani nee Baggio, of a marble base of a sports trophy from Elmhurst, passed away recently at the living room floor, and a silver decthe age of 82. Beloved wife of Dr. orative top of a trophy recovered from Ronald Stefani, Sr.; loving mother of the inside of one of the glass panes of Valerie (Hal) Cahill and Dr. Ronald the main entrance door. This portion of (Nina) Stefani, Jr.; grandmother of the trophy was wedged between a glass Daniel (Kate), Matthew and James pane and a clear plastic covering on the Cahill and Nicholas, Ronald (fiandoor. “It was determined that the knife- cée Ally) and Marisa Stefani; sister like object that Johnson threw at Dep- of the late Donald Baggio; cousin of uty Kuschell was a sports trophy with Julianne Pitzaferro and Rita Ross. a marble base,” Berlin’s statement con- Dorine was a graduate of Trinity High School, River Forest and DePaul University. She had a long career in jewelry and designer clothing sales. She loved her grandchildren are possible,” noted Dr. Moyer. More than 400 superintendents, rep- and had a passion for travel, meetresenting 66 percent of Illinois’ public ing new people and learning about school students from Carbondale to new cultures. Visitation will take Chicago to Rockford have joined the place at Ahlgrim Funeral Home, 567 effort. To view their names and the dis- S. Spring Rd., on Thursday, April tricts they represent, see the attached 27, 2017 from 3-8 p.m. Friends will gather at Visitation Church, 779 S. press release. York St., Friday, April 28, 2017, at 10:45 a.m. for the Funeral Mass. Interment Private. In lieu of flowers, Memorials will be appreciated for the Nancy W. Knowles Cancer Center at Elmhurst Memorial Hospital, 177 E. Brush Hill Rd., Elmhurst, IL United Community Concerns As- 60126. Funeral arrangements prosociation will host Taste of the Town: vided by Ahlgrim Funeral Home. For Food for Life, an Elmhurst food and more information, call 630-834-3515 drink sampling, on Thursday, May 18 or visit ahlgrim.com. from 6-10 p.m. at the Wilder Mansion. The evening will showcase food, wine, and beer tastings from 15 Elmhurst restaurants, cooking demonstrations by local chefs, and live music by the Clay Corso Trio. Proceeds from the event will benJoin Elmhurst Park District for a efit UCCA, an all-volunteer, not-forprofit organization that for 38 years morning of creative and unique art has provided food to Elmhurst Com- creation at our Painting with Coffee munity School District 205’s children class, Wednesday, May 3 from 9-11 and families in need. Last year UCCA a.m. That’s right! You will learn to provided more than $86,000 in food paint using coffee to make a variety to more than 300 families and 100 se- of values in your painting. Select niors as we worked to strengthen our an image to work from (landscapes, flowers, birds, etc.). Open to all skill community by ending hunger. Tickets are $50 per person in ad- levels. All supplies are provided. Fee vance / $60 at the door.  Visit ucca-el- is $29/ Abbey member; $34 resimhurst.org for tickets online or send dents/$39 non-residents. For more payment to UCCA, 125 W. Church information or to register, please call (630) 993-8901 or visit epd.org. St., Elmhurst, 60126. “Johnson thrusted and then threw the knife-like object toward the deputy at which time, believing that his life and the lives of others were in danger, the deputy discharged his weapon at Johnson, striking him four times. The deputy immediately advised the dispatch officer “shots fired.” Johnson was transported to Elmhurst Hospital where he was pronounced dead at 12:05 a.m. on January 2, 2017 by medical personnel. Subsequent toxicology reports revealed that Johnson had THC, the active ingredient in marijuana, in his system at the time of his death.

The Elmhurst Independent is mailed at no charge by request to residents in the 60126 zip code area. Out-of-area mail subscriptions are $29.95 yearly. Single copies are also available at more than 80 newsstand locations in Elmhurst. For home delivery information call 630.834-8244.

Content appearing in the Elmhurst Independent may not be reprinted without permission of the publisher or editor. Requests should be directed to Independent@rvpublishing.com or 630.834-8244. Postmaster: Please send address changes to: THE ELMHURST INDEPENDENT 240 N. West Avenue, Elmhurst, IL. 60126

On Monday, April 24, Elmhurst Community Unit School District 205 Superintendent Dr. David Moyer joined more than 390 school chiefs from across the state, representing 1.3 million students, in calling for the Illinois General Assembly to immediately pass a state budget. The grassroots initiative - called “Pass Illinois’ Budget!” - also urges lawmakers and Governor Rauner to improve the state’s education funding formula, and pay school districts millions of dollars owed in unpaid bills this year. As legislators return to Springfield following their spring break, school districts are using school marquees to share their frustration with the state budget crisis and taking to social media with a call to #PassILBudget. The state now owes District 205 $3,670,579 as of April 24, 2017 and has been operating without a full budget for the past 22 months. “I stand with more than 390 superintendents from across the state in a call for action,” said Dr. Moyer. “We need to end the impasse now and move forward with a budget that will serve the two million K-12 Illinois public school students who represent our future.” The superintendents are calling on members of the Illinois General Assembly and the Governor to do the following: • Immediately, and with bipartisan support, end the state budget impasse. • Improve the state’s education funding formula and invest in students and schools, including higher education,

throughout the state • Pay school districts what they are owed this year. While K-12 education has benefited from a partially-funded state budget, Illinois schools, students, families, and communities will continue to suffer without a full state budget. Districts will continue to struggle if “Mandated Categoricals,” state payments which support special education, bilingual education, transportation, and other important services, do not get paid this year. District 205 has not received three categorical payments this year. Here are the largest funds due: • Transportation - $990,078.06 • Special Education - $2,616,602.18 • State Free Lunch - $1,818.25 • Driver’s Education - $22,080.28 • Early Childhood - $40,000.00 State revenue accounts for about 8.13 percent of District 205’s operating budget or $9,341,790. The General State Aid payments, which support general operating expenses, are being paid on time, however, the categorical payments are not. District 205 has not received any categorical payments this year with the exception of one late quarter payment from last fiscal year. “Because this money reimburses costs to existing programming, and because the majority of these services are required by law, the District will likely have to consider either spending down its fund balance, which is an unsustainable solution, or study options to reduce spending in other programming areas in which discretionary decisions

UCCA to host Taste of the Town: Food for Life

Have fun painting with coffee at The Abbey