from Rivet April 2020
by Sourcing Journal 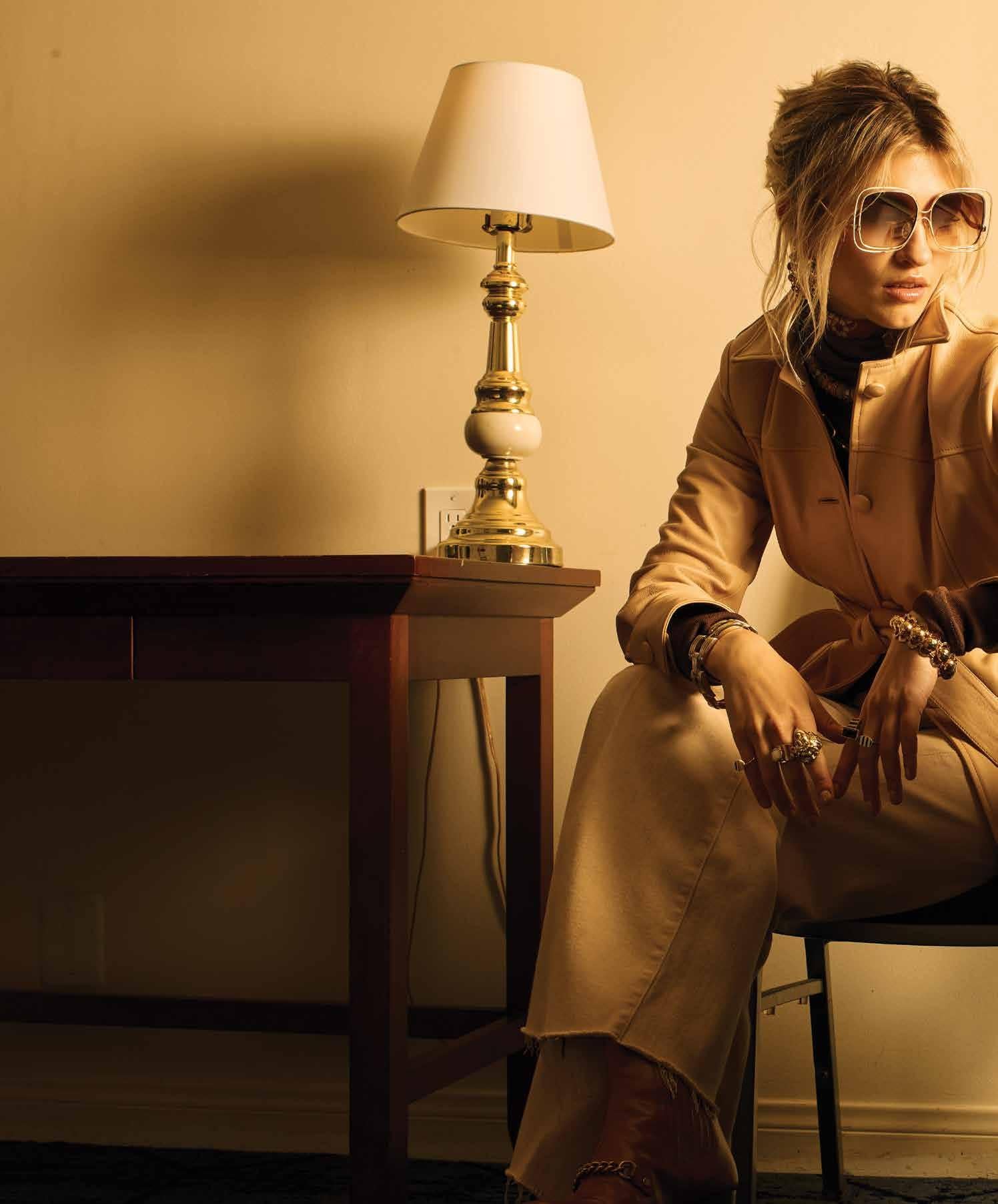 t took just one line to change the way I denim brands would forever market their jeans, when in 1980, Calvin Klein tapped then-15-year-old rising starlet Brooke Shields to utter: “Do you know what comes between me and my Calvins? Nothing.” The provocative commercial did exactly what it intended to do. It shook parents and was banned from major television markets, but Calvin Klein—and jeans—emerged on the other side of the bad publicity and into a new echelon of fashion. Calvin Klein was selling more than jeans now—it was selling sex. And in the process, it made young women want to look and dress like Shields. “Denim and celebrities have always gone hand in hand as a marketing mix,” said Stacy Jones, CEO of Hollywood Branded, a Los Angeles-based product placement and influencer marketing firm. “They truly are together the epitome of pop culture.” Hollywood has long been an epicenter where fashion trends thrive and die, but denim became an instant Hollywood classic when films in the 1950s began dressing strong characters in jeans as a sign of their fight against societal expectations, she said. Jeans defined James Dean’s rebel mystique, Marilyn Monroe’s girl-next-door sex appeal and John Wayne’s rugged persona. And young cohorts of the time took note. “The trend—on screen and off—only continued to grow with denim becoming the primary wardrobe of the 1960s and 1970s, of the youth movements replicated on movie screens across the nation and worn by celebrity protestors in the news,” Jones said. As a result, denim-clad celebrities “became billboards of dreams for millions of youth.”

Denim brands have long-relied on the buzz of celebrity ad campaigns, but a new type of stardom is taking shape.

FAME As denim’s star ascended in fashion, it has also evolved into a lucrative endorsement business for famous faces. When magazines started replacing models with celebrities on their covers in the ’90s, brands followed, churning out iconic campaigns like Mark Wahlberg flexing for Calvin Klein in jeans and tightie-whities. Levi’s rolled out an all-star tribute for the 50th anniversary of the Trucker jacket, featuring celebrities like Justin Timberlake, Snoop Dog and Solange. Meanwhile, The Gap has welcomed everyone from Awkwafina, to Cher and Luke Perry to front their campaigns. Then there are those celebrities who have built their own denim empires, beginning with heiress Gloria Vanderbilt, who became the “queen of jeans” in the ’70s with her shapely designs. Three decades later, reality TV star Khloé Kardashian is emphasizing fit and shape, too, with her premium denim line, Good American. But a famous face (or body) isn’t enough to sway millennial and Gen Z consumers in 2020. With a brand’s authenticity under a microscope, denim labels are seeking celebrity partnerships that help convey their values to the consumer. “Today’s consumer cares about authenticity to a higher degree than that of any prior demographic,” Jones said. “Today, the focus is on brand values and ensuring that the values of the brand are aligned with the brand of the celebrity, because if either is not, it will hurt the overall partnership.”

Authenticity comes from the feeling that a celebrity actually likes the product, said Evan Morgenstein, founder of CelebExperts, a celebrity and influencer booking agent. The best way to convey that connection, he said, is for celebrities to be involved in the design. Tommy Hilfiger has taken this approach in collaborations with ‘It’ girls like Gigi Hadid and Zendaya that each unmistakably capture their personal styles. The Tommy x Gigi collections reflect the model’s all-American athleisure style, while the Tommy x Zendaya line of glammed-up disco fare aligns with the actress’ fashion-forward aesthetic. If a celebrity can honestly tell their followers they were present during the design process or in the factory, and the product looks like it belongs to them, it legitimizes a brand’s story, Morgenstein said. Joe’s Jeans looks for a personal connection with their celebrity partnership. “The first thing we consider is how organically they would connect with the brand,” said Jennifer Stender Hawkins, senior vice president of marketing and innovation at Joe’s Jeans. “They become part of our brand family and it becomes a close working relationship. Most of those we have partnered with have long been fans of the brand.” Case in point: Joe’s Jeans is teaming up with Erin and Sara Foster, stars of the VH1 reality TV show “Barely Famous,” for a Spring/Summer 2020 capsule collection and campaign. The collection includes jeans that reflect each sister’s personal style—a high-rise straight for Erin and an ultrahigh-rise skinny for Sara. But the collection isn’t the first time Joe’s has worked with the sisters. The brand also hosted a jean jacket activation at Erin’s Nashville wedding in January. “This partnership with the Foster sisters speaks to our desire to engage the social community with our brand in different ways by stepping outside of the box and tapping into relevant personalities that we feel will not only elevate the brand but will also speak to the consumer,” said Joe’s Jeans CEO Suzy Biszantz. And during a time when female empowerment and entrepreneurship is being celebrated, entrepreneurs themselves are gaining star power. In the lead-up to Valentine’s Day, Joe’s partnered with wedding jewelry designer Stephanie Gottlieb for a playful collection of jeans embellished with hearts and crystals. Gottlieb, an influencer in the bridal space with more than 333k Instagram followers, was at the center of the collaboration. “Stephanie is an amazing content creator and often includes denim in her photography,” Stender Hawkins said. “We shared some mutual business contacts and were both excited to be introduced and work together. Her product turned out beautifully and her fan base responded very positively to it.” Likewise, DL1961 released a 24-piece capsule collection last year that was co-designed by Marianna Hewitt, co-founder of skincare brand, Summer Fridays. “Finding the right celebrity to endorse a product is a delicate process that involves thoroughly checking into that individual's personal activities and history, along with considering whether their reputation meshes with our brand values,” Ryan Lombard, DL1961 PR manager, said. With 998k Instagram followers, Hewitt is a bonafide influencer, but it was DL1961’s history of strong female leadership that made the entrepreneur a good fit for the brand. “Working with DL1961, a women-run company, is inspiring, and I love how much passion goes into making each piece and knew I wanted to share their quality denim with all of my followers,” Hewitt said at the time of the launch. While collaborations are not new to DL1961 (the brand has partnered with celebrities like Jessica Alba and Emily Ratajkowski in the past), the scale and strategy with the Marianna Hewitt capsule was different from its previous partnerships. “We took a holistic approach that was digital first, but in combination with in-store events at Nordstrom and Bloomingdale’s,” Lombard said. As a result, the brand was able to interact with customers at many different levels, he added, by “having content that lived on social media and layering that with media content, department store digital platforms and in-store displays that were all designed in one tone and message to maximize impact, and of course sales.”

This story is from:
Rivet April 2020
by Sourcing Journal