South to a Sailing Life 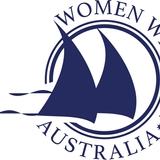 from SisterShip Magazine May 2020
by SisterShipMagazine

from 'SisterShip Magazine May 2020' 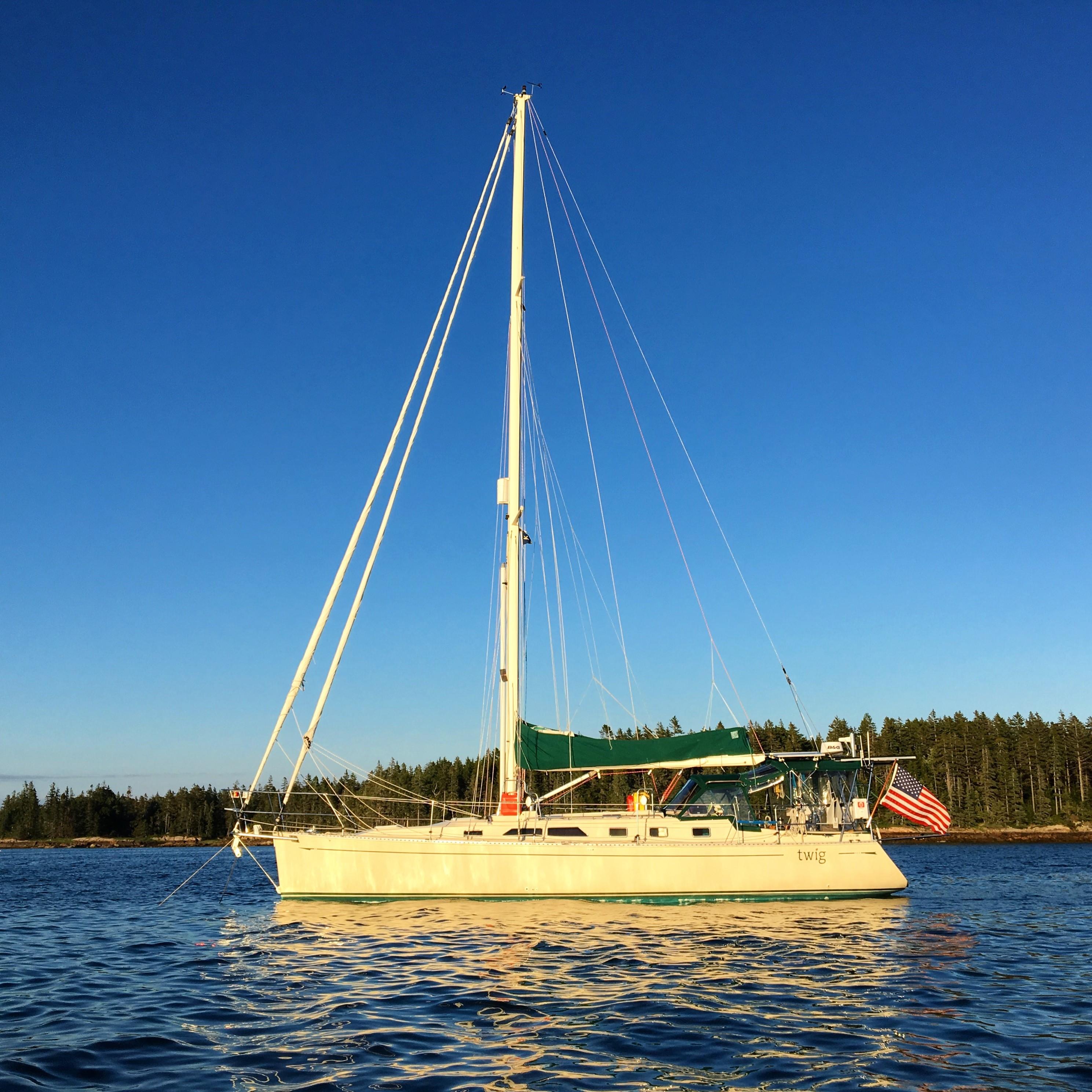 On Land, With Uncertainty

When she’s not sailing, Andrea is likely to be underwater enjoying the Mesoamerican reef.

Andrea Radoff is sailing in the southern Caribbean, running a sail business, and doing it all with two city dogs.

The sun is warm, the sea a perfect Caribbean blue, and the wind, well, it’s sporty as we beat to windward. It’s pretty much a perfect day off the south coast of Roatan Island, 150 km north of Honduras. Andrea Radoff is showing me she’s not just a capable captain aboard City Dogs, her Beneteau Oceanis 393. She’s also a registered nurse, and I need her attention right now as my breakfast isn’t up to the rigors of the sea. I’m embarrassed, but

I remind myself Andrea must deal with seasickness all time as she introduces tourists to sailing and snorkeling in the southern Caribbean. She is calm and kind, and when we reach the morning’s goal, a mooring centered inside a horseshoe-shaped reef, I soon forget my woes and follow her into the water for a leisurely and colorful snorkel session.

Andrea makes running a charter boat look easy, but there’s a lifetime of experience behind her confidence. After a wonderful day on the water with Andrea and her partner,

Steve Hopkinson, I wonder what path led her to Roatan. On a cold, blustery winter’s day here in the States, I call her and we talk about her growth as a sailor.

Andrea Radoff started sailing as a girl, when her family would sail in the eastern Caribbean. “I just loved everything about it. I used to dream about going out on my own. I loved being on the water, under the stars.”

Her love of sailing stayed with her through college and when she moved to New York City to become a nurse, she found a sailing club and honed her skills. “I always thought sailing was super expensive and I wouldn’t be able to afford it, especially in New York City. It turned out the club was quite reasonable.”

Andrea sailed small tiller-steered boats –J24s, J80s, Melges 24s –for the first time. “Those boats were so much fun. They were so fast, so responsive. The tiller is unforgiving. I kept going the wrong way until it finally clicked one day. You really get to know your points of sail. It’s a small, reactive boat.”

The waters of New York City turned out to be a great teacher as well, with strong currents, shifting winds from the tall buildings, and incessant boat traffic from water taxis, ferries, barges, and cruise ships. “If you can sail in New York Harbor, you can sail anywhere. You’re in this tiny little boat, and there’s so much going on. It’s not easy, which made it all the better for me, because I like a challenge.”

The club also allowed her to crew on racing boats. Great for her competitive spirit, but like so many she was turned off by the yelling. “I decided it wasn’t my cup of tea.” But she spent more and more time on the water, eventually becoming a coach for new sailors. It wasn’t a paid position, but it allowed Andrea to sail without paying a membership fee. “I got to sail as much as I wanted. I wasn’t doing it for the money. I was happy to be able to sail. It was a great learning experience.”

ABOVE: Andrea at the helm of City Dogs, her Beneteau Oceanis 393.

Andrea’s partner Steve knew nothing of sailing or diving until he met her, but her adventurous spirit rubbed off on him. “I introduced him to diving and he was obsessed.” On a dive trip to Roaten in 2015, they chanced upon a sunset sail charter, an encounter that changed their lives. “It was kind of a disaster. They didn’t really know what they was doing. They blew up the stove and singed their eyebrows and lashes. Steve ate the food and got sick. It wasn’t the best sunset sail. I said to Steve –and this is the competitive New Yorker in me –we can do this. We can do this much better.”

Her initial interest in sailing to Roatan was reinforced by her time treating patients. Working with cancer patients getting chemo taught her a lot about life. “I saw some of these really sad cases. All of the sudden, you have cancer. You’re going to be dead in a year. It dawned on me. Life is short. There are no guarantees.”

Andrea says this was the beginning of a “year and a half impulsive plan”. She started a checklist of what they would have to do. She had enough hours for a captain’s license and an unfortunate injury at work gave her time

to take an online class and take her test. With a “six-pack” license under her belt, she turned to getting more dive certifications. She and Steve got their Divemaster certifications, although Andrea notes that you really need to be a Dive Instructor to pick up work. On another trip to Honduras, she hired a driver to take her to every possible place to keep a boat. She bought her Beneteau and rented her apartment. She convinced her father, who thought she’d lost her mind moving to Honduras. She and Steve quit their jobs. Things fell into place.

Andrea and Steve were joined on the first part of their passage south by three of her girlfriends from the sailing club –all accomplished sailors –and their two dogs, Fozzie and Mischa. The dogs are so important to Andrea that she named the boat and her business after them –City Dogs. “I was most concerned about them. They’d never been on a boat. I didn’t know how they

were going to handle it. I could tell they were quite fearful, but they did great especially once we got the netting up. They relaxed.” The passage was like most passages: lots of beauty, some bad weather, and spectacular sailing. After a year and a half of planning, they found themselves home in Roatan.

Roatan is part of the Mesoamerican reef, the largest barrier reef system in the Western Hemisphere. The island is the premiere diving destination in the Caribbean, and plenty of tourists and cruise ships visit each year. The extensive reefs are a blessing and a curse for boaters. “The snorkeling is great. There’s lots of little holes to go to,” Andrea says. Navigating through them is a challenge though. “The charts aren’t up to date. They haven’t been updated since the 1980s. Once you get inside the bays, there are no depths.” She relies on local knowledge, other cruisers

BELOW: Fozzie and Mischa, the City Dogs, have settled into their sailing life very well.

who have waypoints, Active Captain, Google Earth, and of course common sense. “There’s so much reef. Even with a cruising guide, I’ve got Steve up on the bow. We go very slow in and out of places.”

There are plenty of other benefits to Roatan for a charter sailing business. “There’s great wind here. The trade winds come out of the east all the time. Most of the time you’ve got 10-15 knots. The snorkeling is great. There’s lots of little holes to go to. And it’s not crowded. It’s not like the BVIs that are inundated. And it’s not expensive like the Eastern Caribbean.”

Sargassum, the floating seaweed usually found in the Atlantic gyre, has been a problem. Extensive blooms have impacted the entire Caribbean in recent years, and the seaweed proliferates in such huge numbers that it makes boating difficult. “Last year it came in a lot. The first time I docked with Sargassum, well, I always come in slow, and it was so thick, it stopped us cold. We couldn’t move. We had to throw lines to the people on the dock so they could pull us in. It wraps around the propeller and you lose steerage. If it’s really thick, do we even try to go out? Are we going to cancel because of seaweed? It’s so thick it kills fish. They float up to the surface and it smells terrible.”

When I ask her if being a woman has been a challenge, she notes that the local society is particularly misogynistic. Officials have laughed in her face when she asserted she, not Steve, was the captain. Mechanics have refused to work with her. But sometimes, being a woman is a plus. “I was away and Steve got totally ripped off. Oddly enough, I can get a better deal. I’m good at negotiating discounts. I can get away with more because I’m a woman. They’re unsure of how to handle me. It’s definitely noticeable. I’ve been laughed at. They always look a little puzzled.” with us 24/7. They’re very happy, unless it’s rough. If it’s rough for us, it’s rough for them. Mischa always has a smile on her face when we’re out. They’re spoiled little doggies. I feel like the dogs weed out the bad people. I’ve had one or two people ask if I can leave the dogs. I said, ‘they come’. They’re part of the deal. They’re in the name. They were city dogs. Now they’re boat dogs.”

Now that City Dogs is an established charter business, Andrea has some advice for others who might want to follow in her footprints. “Do it”. She has taken hundreds of visitors off the beaten track in Roatan, snorkeled over dozens of reefs, and made many friends. She has even inspired one woman to quit her job, move to Roatan, and become a dive instructor. “Life is short. Too many people wait and they never do it. You need to have some money, but there are ways to make money. Do it now.”

All photos courtesy of Steve Hopkinson.

JANET GANNON is a sailor, scientist, and writer who sails out of Brunswick, GA, with her husband. She signed up for sailing lessons at camp because the instructor was cute, and she's been a sailor ever since. She is a true North American East Coast boater, having been on the water from the Bay of Fundy to Key West. Janet is also the founder and administrator of the Facebook group Cruisers Who Care About Climate.

This story is from:
SisterShip Magazine May 2020
by SisterShipMagazine