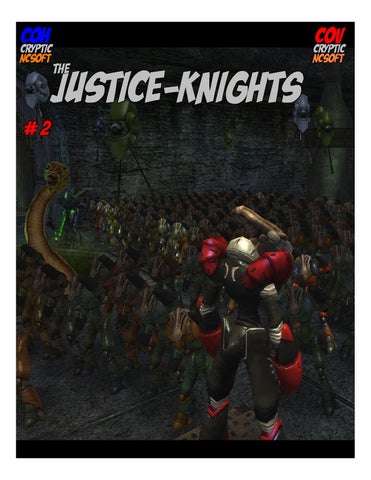 that's the medical lab. over this way is the teleportation wing.

editor note : the *events in this issue happen during issue 1

now, the reason we have several telepads is again because of the mix of rikti and earth technology. couple that with interference and that limits the coordinate locks.

to make sure you don't show up with your head coming out your groin, they use a limit of two pre~set coordinates each.

~that one is still mainly rikti tech.

it has two~way travel capability but its still not perfect and has saftey measures.

these are also one~way teleporters. the teleporter you came here on is different though.

hey, you really think i want to be here ?

you joined the justice~Knights, well guess what~

~your your leader, sin stalker wants everyone to know all this and i am stuck with the job this week of showing new recruits around.

now why dont you close your mouth and open your ears cause i'm only going over all this once.

unless you want to be running around here lost. excuse me ?

i owe sin so i'll listen and won't show you back to that medical area.

now the teleporter rooms are organized by color and location. it's~~

we will continue this later.

rrr . . . work you vile piece of technology !! you have to choose one of the two locations and then hit the button.

i'll do this my way.

you're horrible at this . . . patman and mad mummy.

what do you think you're doing here ?

following you, thought there'd be some action.

it's this guy. it's like he's never tracked someone in a city environment before.

right now i really have to go. you two get out of here.

hablas espa単ol ? he must speak something.

eh ? i'll figure it out later.

get out of here ? i dont think so. somethings going down. i didnt join this group to sit around. damn it. he's gone.

what are you doing here anyways ?

first off, i'm telling you to leave. i'm doing this nicely for a change since we are in the same group and you're new.

secondly, it is none of your business what i'm doing here~~

~~what the hell are you doing here ? heh.

what do you think you're doing following me ?

all of you, why are you following me ? nice scary deep voice, you must be real bad.

trying to help you.

i need someone who knows this area well.

someone who can get me lost .

i know just the guy.

are you sure about this ?

well he is a justice~knight.

semi~Justice~Knight who refused to answer his communicator.

I could use your help. the rest of you will go.

what's going on in there anyway ? sorry to interrupt your meetinb but, we need your help

it's heroes working with civilians to better our streets.

you think superheroes are the only ones wanting to clean up this city ?

most people want to but they just don't know how.

that's where we come in.

sure, come in. enough, striker. i must speak with you in private.

with you or the "Neighborhood watch" ? this is a waste of time.

let's see, how about the fact that normal people suck.

they don't give a damn about anything or anyone but themselves. then why are you even a superhero ?

i'm not. i'm a fighter, so i fight. I joined the knights cause i trust sin stalker. i also think "super heroes" are the only decent people in this world, sometimes . . . you do realize sin is pretty much powerless ? fine , then he's the exception, whatever.

alright. i get that you've lost faith in normal people. what's your problem with me ?

you are so full of yourself. excuse me ?

you put on this dark demeanor and call yourself "Hell" just cause you have fire powers. you think you're so much deeper and darker or whatever. . . . just like every other hero out there.

you whiny little @#*$. you're so full of yourself thinking you have it worse just cause some devil worshipping ninja cult dragged you in and used you. how'd you~~ ~~i have my sources. i I've been down to hell , become the read up, but avatar of a demon god, embodied you know $#*@ . with his powers and used to do a lot of horrible things.

you think your attitude scares me ? I should burn your mouth off.

>sigh< now you. you have to speak some type of language. you know, speak ? Talk ?

~cause obviously something's wrong and all you care about is fighting someone . . . get out of here.

but do you have a language where you're from ? laang~ua~ge ? speak ? oy, i get the one retarded egyptian mummy. <ah! there we go !>

<why do they keep assuming i'll understand them if they repeat it slower and slower . . .> **

<this is . . . an ancient egyptian language. no one today would know it unless they specialized in languages and your time period.>

<ancient ?> >sigh< <i thought as much but i did not want to give up hope of this being the next world.> <how ? no one in this land has been able. i all but gave up hope of communication.> <it's ** complicated.>**

** translated from archaic egyptian. ** hell knows a magical langauge ** commonly spoken in the underworld that acts as a universal translator.

<oh trust me. you aren't in heaven or hell yet.>

<The only words i know in this place's language. it is what that other being called me.>

* follow if you wish but i wait for no one !

<i will take that as my name.>

he didn't tell you ? his wife's been kidnapped by the lost.

! the necromancer who brought mad * mummy back to life called him "mad" when he developed a will of his own.

are you sure this is the place ?

i can't believe you didn't tell us your wife was kidnapped.

seems like it but not sure. it was none of your business.

a few days ago the lost muscled the skulls out of this warehouse and now its like a fortress.

it's still none of your business.

rrrr. . . if you really wish to help, keep them distracted out here while i go inside.

i'm helping you, deal with it.

striker, go with him.

they are on their way.

they will be here within moments.

yes. the perimeter has been reinforced~ ~though two have entered, no more will follow.

right away. the inferior untouched will not escape.

<they have us surrounded. >

rikti . . . i can hear certain types of mental waves. mainly the broadcasting by rikti.

the rikti are working with the lost ?!

now this is what i'm talkin' about !

go spyke, i got deez.

ah, finally i can move !

you sure everything is alright ?

i was created in a lab by the rikti during the invasion. i'm a living weapon, an experiment .

now that this is over, mind telling us what this was all about ?

why did these guys want you ?

i was freed from that by sin stalker and the justice~Knights.

so they captured fhyrestar here to get to you ?

it was our pleasure ma'am

thank you all so much for helping us.

good job patman. you really came through in the end. welcome to the justice~knights.

next time in the justice~Knights comic . . . women troubles !

spykefury < he was not bred.>

<he was meant to be a plague upon the human race.>

<after the retaliation ** he was arrested by those he ended up defending.>**

<in an escape attempt by his cell mate, he received his chance for freedom . . . >

<he apprehended the fugitive a long side a group known as the Justice~Knights. >

<and their leader spoke up for him.> <but again proved a failure. >

< he was released into their custody and even worse, became a "hero" fighting along side them. >

<the uncalculated arose and he found love and is even an expecting father~to~be.>

<and there is no telling how long it will be until a second force returns . . . > <this may be the strength we need to dominate the primitives of this world . . . > <they are barbarians!>

spykefury spykefury is is a a fusion fusion of of rikti rikti and and human human genetics. genetics. designed designed to to be be the the perfect perfect foot foot soldier soldier in in the the rikti rikti going invasion invasion of of earth. earth. going against against his his programming programming of spyke spyke chose chose the the side side of humans, humans, taking taking on on the the role role of of hero, hero, husband husband and and soon soon father. father. origin :::: mutant origin origin origin mutant affiliations ::: justice~Knights affiliations affiliations justice~Knights arch arch arch nemesis nemesis nemesis :::: '' his arch nemesis his creator creator '' real real name name unknown unknown written written by by by joseph joseph joseph cohen cohen cohen and and and spykefury spykefury spykefury written by joseph cohen and spykefury written written by joseph cohen and spykefury

first first off, off, again again

for screen screen shots shots and and helping helping me me learn learn how how to to use use demo demo programs. programs. hell hell ~~ for thank thank you. you.

patman patman ~ ~ trusting trusting me me with with your your account account is is really really amazing. amazing.

it it made made this this second second issue issue much much easier. easier. thank thank you. you.

everyone everyone keeps keeps commenting commenting on on the the first first page page with with the the ship. ship.

to to anyone anyone else else i i missed missed

you are all great ! While part of the Justice-Knights are off in Issue One, several other members find themselves helping one of their own while not even knowin...

While part of the Justice-Knights are off in Issue One, several other members find themselves helping one of their own while not even knowin...