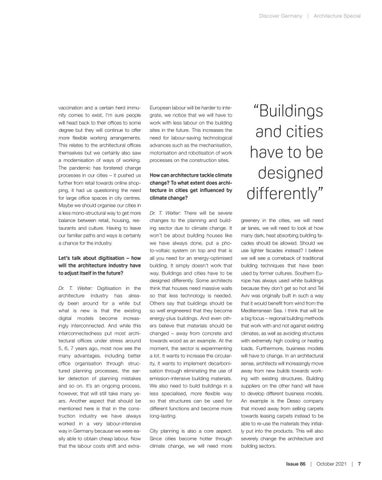 vaccination and a certain herd immunity comes to exist, I’m sure people will head back to their offices to some degree but they will continue to offer more flexible working arrangements. This relates to the architectural offices themselves but we certainly also saw a modernisation of ways of working. The pandemic has forstered change processes in our cities – it pushed us further from retail towards online shopping, it had us questioning the need for large office spaces in city centres. Maybe we should organise our cities in a less mono-structural way to get more balance between retail, housing, restaurants and culture. Having to leave our familiar paths and ways is certainly a chance for the industry.

Let’s talk about digitisation – how will the architecture industry have to adjust itself in the future? Dr. T. Welter: Digitisation in the architecture industry has already been around for a while but what is new is that the existing digital models become increas-  ingly interconnected. And while this interconnectedness put most architectural offices under stress around 5, 6, 7 years ago, most now see the many advantages, including better office organisation through structured planning processes, the earlier detection of planning mistakes and so on. It’s an ongoing process, however, that will still take many years. Another aspect that should be mentioned here is that in the construction industry we have always worked in a very labour-intensive  way in Germany because we were easily able to obtain cheap labour. Now that the labour costs shift and extra-

European labour will be harder to inte-  grate, we notice that we will have to work with less labour on the building sites in the future. This increases the need for labour-saving technological advances such as the mechanisation, motorisation and robotisation of work processes on the construction sites.

How can architecture tackle climate change? To what extent does architecture in cities get influenced by climate change? Dr. T. Welter: There will be severe changes to the planning and building sector due to climate change. It won’t be about building houses like we have always done, put a photo-voltaic system on top and that is all you need for an energy-optimised building. It simply doesn’t work that way. Buildings and cities have to be designed differently. Some architects think that houses need massive walls so that less technology is needed. Others say that buildings should be so well engineered that they become energy-plus buildings. And even others believe that materials should be changed – away from concrete and towards wood as an example. At the moment, the sector is experimenting a lot. It wants to increase the circularity, it wants to implement decarbonisation through eliminating the use of emission-intensive building materials. We also need to build buildings in a less specialised, more flexible way so that structures can be used for different functions and become more long-lasting. City planning is also a core aspect. Since cities become hotter through climate change, we will need more

“Buildings and cities have to be designed differently” greenery in the cities, we will need air lanes, we will need to look at how many dark, heat absorbing building facades should be allowed. Should we use lighter facades instead? I believe we will see a comeback of traditional building techniques that have been used by former cultures. Southern Europe has always used white buildings because they don’t get so hot and Tel Aviv was originally built in such a way that it would benefit from wind from the Mediterranean Sea. I think that will be a big focus – regional building methods that work with and not against existing climates, as well as avoiding structures with extremely high cooling or heating loads. Furthermore, business models will have to change. In an architectural sense, architects will increasingly move away from new builds towards working with existing structures. Building suppliers on the other hand will have to develop different business models. An example is the Desso company that moved away from selling carpets towards leasing carpets instead to be able to re-use the materials they initially put into the products. This will also severely change the architecture and building sectors. Issue 86  |  October 2021  |  7