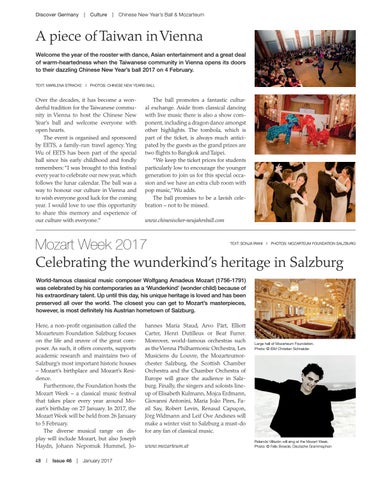 A piece of Taiwan in Vienna Welcome the year of the rooster with dance, Asian entertainment and a great deal of warm-heartedness when the Taiwanese community in Vienna opens its doors to their dazzling Chinese New Year’s ball 2017 on 4 February. TEXT: MARILENA STRACKE  I  PHOTOS: CHINESE NEW YEARS BALL

Over the decades, it has become a wonderful tradition for the Taiwanese community in Vienna to host the Chinese New Year’s ball and welcome everyone with open hearts. The event is organised and sponsored by EETS, a family-run travel agency. Ying Wu of EETS has been part of the special ball since his early childhood and fondly remembers: “I was brought to this festival every year to celebrate our new year, which follows the lunar calendar. The ball was a way to honour our culture in Vienna and to wish everyone good luck for the coming year. I would love to use this opportunity to share this memory and experience of our culture with everyone.”

The ball promotes a fantastic cultural exchange. Aside from classical dancing with live music there is also a show component, including a dragon dance amongst other highlights. The tombola, which is part of the ticket, is always much anticipated by the guests as the grand prizes are two flights to Bangkok and Taipei. “We keep the ticket prices for students particularly low to encourage the younger generation to join us for this special occasion and we have an extra club room with pop music,”Wu adds. The ball promises to be a lavish celebration – not to be missed. www.chinesischer-neujahrsball.com

World-famous classical music composer Wolfgang Amadeus Mozart (1756-1791) was celebrated by his contemporaries as a ‘Wunderkind’ (wonder child) because of his extraordinary talent. Up until this day, his unique heritage is loved and has been preserved all over the world. The closest you can get to Mozart’s masterpieces, however, is most definitely his Austrian hometown of Salzburg. Here, a non-profit organisation called the Mozarteum Foundation Salzburg focuses on the life and œuvre of the great composer. As such, it offers concerts, supports academic research and maintains two of Salzburg’s most important historic houses – Mozart’s birthplace and Mozart’s Residence. Furthermore, the Foundation hosts the Mozart Week – a classical music festival that takes place every year around Mozart’s birthday on 27 January. In 2017, the Mozart Week will be held from 26 January to 5 February. The diverse musical range on display will include Mozart, but also Joseph Haydn, Johann Nepomuk Hummel, Jo48  |  Issue 46  |  January 2017