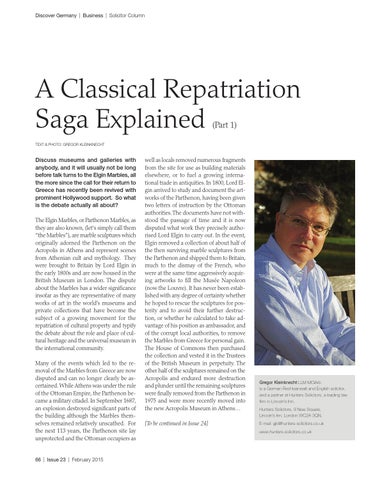 Discuss museums and galleries with anybody, and it will usually not be long before talk turns to the Elgin Marbles, all the more since the call for their return to Greece has recently been revived with prominent Hollywood support. So what is the debate actually all about? The Elgin Marbles, or Parthenon Marbles, as they are also known, (let's simply call them “the Marbles”), are marble sculptures which originally adorned the Parthenon on the Acropolis in Athens and represent scenes from Athenian cult and mythology. They were brought to Britain by Lord Elgin in the early 1800s and are now housed in the British Museum in London. The dispute about the Marbles has a wider significance insofar as they are representative of many works of art in the world’s museums and private collections that have become the subject of a growing movement for the repatriation of cultural property and typify the debate about the role and place of cultural heritage and the universal museum in the international community. Many of the events which led to the removal of the Marbles from Greece are now disputed and can no longer clearly be ascertained. While Athens was under the rule of the Ottoman Empire, the Parthenon became a military citadel. In September 1687, an explosion destroyed significant parts of the building although the Marbles themselves remained relatively unscathed. For the next 113 years, the Parthenon site lay unprotected and the Ottoman occupiers as

well as locals removed numerous fragments from the site for use as building materials elsewhere, or to fuel a growing international trade in antiquities. In 1800, Lord Elgin arrived to study and document the artworks of the Parthenon, having been given two letters of instruction by the Ottoman authorities. The documents have not withstood the passage of time and it is now disputed what work they precisely authorised Lord Elgin to carry out. In the event, Elgin removed a collection of about half of the then surviving marble sculptures from the Parthenon and shipped them to Britain, much to the dismay of the French, who were at the same time aggressively acquiring artworks to fill the Musée Napoleon (now the Louvre). It has never been established with any degree of certainty whether he hoped to rescue the sculptures for posterity and to avoid their further destruction, or whether he calculated to take advantage of his position as ambassador, and of the corrupt local authorities, to remove the Marbles from Greece for personal gain. The House of Commons then purchased the collection and vested it in the Trustees of the British Museum in perpetuity. The other half of the sculptures remained on the Acropolis and endured more destruction and plunder until the remaining sculptures were finally removed from the Parthenon in 1975 and were more recently moved into the new Acropolis Museum in Athens… [To be continued in Issue 24]