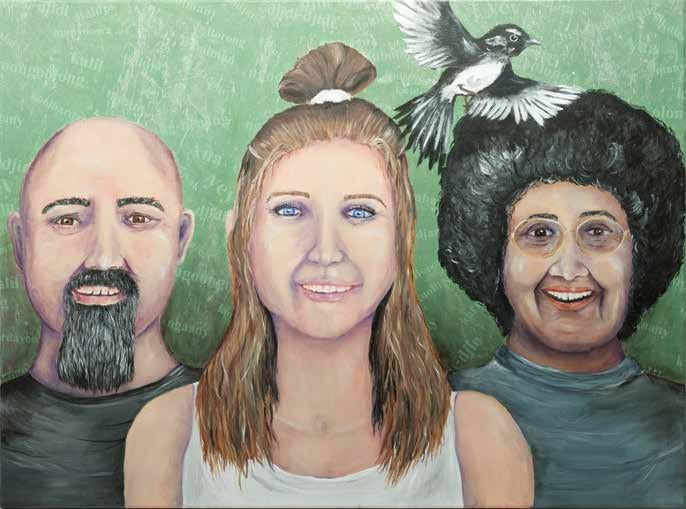 It’s made headlines around the world - a huge mural painted on a dam in the heart of the BunGeo. Monique Ceccato finds out more about this extraordinary achievement.

They said painting a giant mural on a dam wall couldn’t be done, but Travis Robinson wouldn’t take no for an answer.

“I was contacted by the Premier and Cabinet and was advised that somebody had had this great idea of putting a mural on the Wellington Dam. A couple of people had been contacted in Perth and they had said no, so they asked me to have a crack at it,” said Travis, who couldn’t see why, with the right team behind him, the mural shouldn't become a reality.

“I did an initial report with budgets and the like, it was presented and agreed to, and then they asked me to be the project director of the whole thing.”

At 34m high and 367m wide, painting a mural on the vertically and horizontallycurved Wellington Dam wall was no mean feat. It took just over 12 months, cost just under $1.5 million, and the artistic chops of Brisbane muralist, Guido van Helton, to pull the centrepiece of Collie’s mural trail together.

“Guido is a genius,” said Travis, “and, you know, he was probably the perfect person for the job.”

The project went out to tender and, of all the applicants, van Helten was the only person who didn’t submit a final image for consideration. Instead, when told the community wanted to see something that combined Indigenous culture, the natural environment, and the coal mining history of Collie, he came back and said “without consulting with the community - without hearing their stories, meeting them in person, hearing their side - I can’t give you an image”.

Van Helten’s work is always underpinned by the sentiments of the community that it sits in so, in order to shape his final image, he

The Wellington Dam mural, created by Gural van Helton took over 12 months to complete in a technically challenging project.

spent three weeks meeting and consulting with people from all walks of life around Collie.

“He spent some time talking to Indigenous people and to some really established coal mining families,” said Travis. “He listened to their stories and he got them to open up their photo album and tell him about their photos. He commented on how, when you go and meet people, you ask them to start talking about themselves and people are really like “well, I don’t really have a story.” He said that when he asked people to open their photo albums and show him, they just came alive and had all these stories to tell.”

In meeting with key people in the community, one commonality arose: the Collie River. Whether they were engineers or environmentalists, fisherman or children, they all used the river as a place of recreation.

“Guido took photos from these people - of family members, grandkids, friends - playing or working in the water, and that’s what he depicted on the wall. They’re all photos of people at the Collie River”.

“You can see it is a meaningful piece of art, it’s not just a collection of pictures on a wall,” said Travis, who also consulted extensively with the community prior to the conceptualisation phase.

“Probably half of the people I spoke to thought it was a great idea, while other people thought we were crazy. People were thinking it was a waste of money and that we should be spending it on other things. At the end of the project, there was not one person who wasn’t in love with what Guido had accomplished.”

Since the launch of the dam mural and the wider Collie Mural Trail, all eyes have been on Collie. The visitor centre has seen a huge uptick in visitors and enquiries, and word of the town and it’s artistic masterpiece has even made its way overseas.

“As you can imagine, not everyone who visits a town pops into the visitor centre so, if visitor centre numbers have doubled, you would assume that visitor numbers to Collie are actually higher than that now,” said Travis.

“We’re pretty confident that the attention that it has got not only in WA, but across Australia and internationally, has been huge. I’ve even had an arts organisation in Rio de Janeiro reach out because they’d seen what we had done on the Wellington Dam and they were keen to do something similar, but we’re careful to not give away all of our trade secrets.”

The Collie Mural Trail is an expansive outdoor gallery comprising of 40 mural painted by select local, national, and international artists. Concentrated on the town centre, the trail allows you to discover Collie while taking in colourful pieces on the main streets, in the back alley ways, and around public spaces. Grab a coffee from Wagon 537 before setting off to discover murals by Daek William, Kyle Hughes Odgers, Shakey, and more dotted about town. Then, take a short drive out to Wellington Dam to see the towering centrepiece of the trail, ‘Reflections’, by Guido van Helten.

Whether you want to get up close with wild dolphins on our Swim Tours and Eco Cruises, learn about our amazing marine environment in our interactive Interpretive Centre or enjoy a meal with beautiful bayside views, the Dolphin Discovery Centre has something for everyone! Check our website for opening hours and be sure to book tours and Centre session times in advance to avoid missing out. Your purchase helps fund our conservation, education and research projects here in the South West.

This story is from:
Found Magazine Issue 07
by Premium Publishers