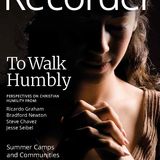 Navajos Take to the Airwaves

Kyle Boyd senses that God has given him a special opportunity to reach out to his fellow Navajo tribal members, whose territory straddles three states: Arizona, New Mexico, and Utah. “Our people are desperately searching for hope,” he said. Recently he was able to realize his dream of sharing God’s message in a very special way.

ABOVE: Twelve people attended the production workshop at Holbrook Indian School in Arizona on the weekend of July 18.

About a year ago, Boyd heard from members at his home church that there was an idea to establish a radio station to reach the Navajo Nation with God’s last-day message. He immediately volunteered. He discovered that many years ago the Voice of Prophecy had produced some programs in Navajo; updated scripts from that source of long ago form the basis of his ministry. On August 2, his voice was heard for the first time around the huge reservation— the largest in North America—and the ministry was launched.

The original dream of Navajo church members was, and still is, to acquire their own radio station. However, a plan to participate in a radio license

However, the church members saw the postponement as merely a temporary delay, and their strategy pivoted to the concept of a trial run on KTNN, the most powerful station on the reservation. Thanks to numerous private donations and a sizable contribution to the project from Adventist World Radio (AWR), the group had enough funds to buy airtime on “The Voice of the Navajo Nation.”

They had no expectations of receiving any feedback from listeners about their first half hour on the air, but within three weeks, eight listeners had called in to sign up for the study course that was offered!

The surprise early response has energized the program producers in their new work of preparing radio programs and the follow-up that the requests have generated. Three church conferences that have territory in the Navajo Nation agreed to help make the preparation of programs possible by installing small production studios where tribal members can conveniently record their radio messages.

the western part of New Mexico. Holbrook Indian School in eastern Arizona also has a studio and plans to involve students in the programs. Thanks to a weekend of training by former AWR vice president Allen Steele, a dozen volunteer program producers were ready to go into action.

Until the next opportunity arrives to acquire their own station, the trial run has convinced our church members that a radio ministry is the best way to reach out to the quartermillion Native Americans occupying the huge desert expanse of their territory. ____________________ By Phil Draper

The original dream of Navajo church members was, and still is, to acquire their own radio station.

This story is from:
Pacific Union Recorder—October 2020
by Pacific Union Conference of Seventh-day Adventists