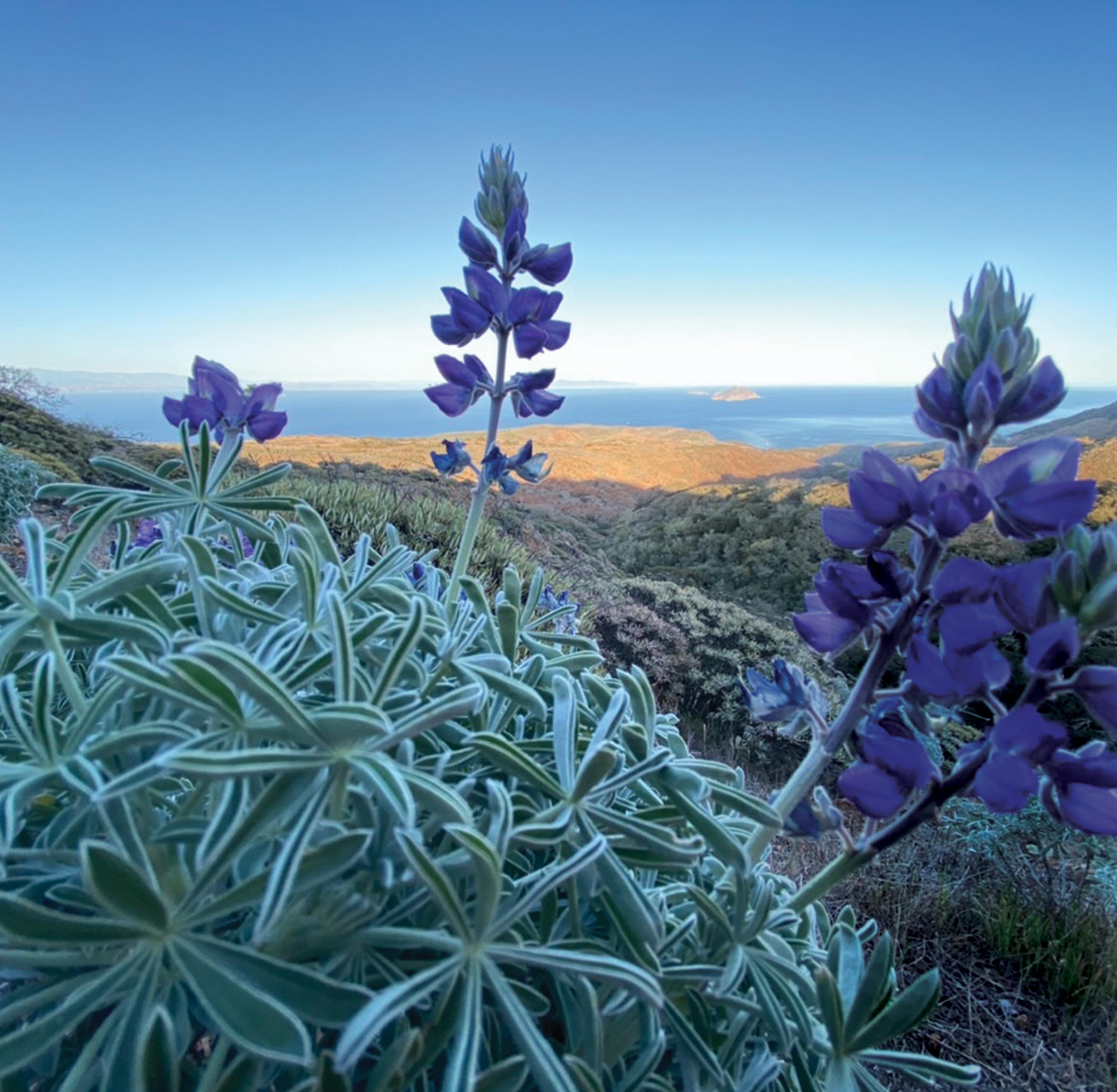 Ojai’s View, Beyond the Coasta...

When a mule train out of Rose Valley started up the Gene Marshall-Piedra Blanca National Recreation Trail the morning of April 14, it was embarking on what was only the second of a nine-phase master plan to restore and reopen the entire trail.

“Over the last 10 years or so, the trail just hasn’t received very much attention,” said Bryan Conant, executive director for Los Padres Forest Association, the nonprofit arm of the U.S. Forest Service. “A lot of it, especially on the back side out by Beartrap, was in really bad shape.”

Enter LPFA, which worked with the Forest Service on a plan to get the trail open and passable to livestock.

A few years ago, LPFA applied for and received grant funding through REI and, last July, put a crew out on the Beartrap portion on the north side of Pine Mountain. It received additional money through a public fundraiser. The crew spiked at historic Bear trap Camp, “allegedly where the last grizzly bear in Los Padres was trapped,” according to Conant. They worked for a week toward Haddock Camp, restoring roughly one mile of the trail. That was phase 1 of the much larger project. Phases 2 through 4 involved Forest Service mule teams packing in tools and supplies to California Conservation Corps crews for two weeks of work by “the C’s” and one week by volunteers, below and above Piedra Blanca Camp. “We received Washington office funding that was directed specifically at hiring youth, so the CCC was perfect for this project,” said Diane Cross, assistant recreation officer with the Ojai Ranger District. “This is a big deal and we’re really excited to make this all happen.” Since the trail is in a wilderness area, no motorized or mechanical equipment is allowed, and the work must be done with hand tools only, such as crosscut saws and loppers. Getting all the gear, food and water to the crew miles into the wilderness requires heavy equipment of the fourlegged variety. “The only way we can pull this o is using pack stock to pack all the gear, to make the CCC’s camp in the wilderness area. If it weren’t for the Pack Stock Center of Excellence, I don’t think this would be happening on this scale,” Cross said.

The Forest Service’s Michael Morse is co-director of Pack Stock Center of Excellence, out of the Inyo National Forest. Two weeks before his mules headed up the trail, he did a recon to see just what he was getting into. “I’m glad this project is happening because it’s definitely going to help give access to some beautiful country,” he said. Morse has been working with the CCC since 1983. “It’s a great opportunity

for young adults to come out, be in the woods and do some kind of meaningful resource protection work, and almost do a self-evaluation of themselves. I can’t think of a better place to do it than here,” he said.

Helping the crews get set up at Piedra Blanca Camp were the CCC’s Ben Herbert, conservation supervisor and project manager for the Los Padres District, and Zaina Nasrallah, natural resource specialist. It’s the fi rst spike camp set-up for most of the team. “This crew is really in for a unique experience. Everything from seeing a pack mule for the fi rst time to setting up a backcountry camp to experiencing a wilderness area; locking the chain saws up at the shop and doing everything by hand,” Herbert said.

The crew out of Santa Maria pulled two eight-day hitches on the trail, with a week o in between. one-year commitment. “It’s an amazing program,” Herbert said. “It provides di erent kinds of job skills — everything from trail work, like we’re doing here, to natural resource protection and conservation work. They can go into fi refi ghting.”

For phase 5 of the project, LPFA’s Ellie Mora led a “First Saturday” volunteer trail project May 1 from the Reyes Creek side and got the first couple of miles stock-passable and in good shape, Conant said.

The northern portion of the trail had gotten so overgrown, according to Conant, that LPFA was getting complaints from hikers and backpackers who got lost or turned around because the trail was impassable. To make a trail stock-passable, crews must create a trail corridor wide enough, generally 6 to 8 feet, for a mule with panniers to get through. They also create a trail canopy roughly 8 to 10 feet tall, widen the tread to 18 to 24 inches and remove downed trees and other obstacles a horse or mule can’t or won’t step over.

Phase 6 was another volunteer weekend May 8-9 clearing trees from Reyes Creek to Haddock Camp. For phase 7, Boy Scout Troop 111 from Ventura went up the weekend of May 15-16 to work from Upper Reyes to Beartrap. Craig R. Carey is assistant scoutmaster with Troop 111. He accompanied 25 scouts and some allied scout units, supported by a handful of volunteer sawyers with the U.S. Forest Service and LPFA. “They enjoyed the trip a lot. It was another great weekend of service,” he said. A few of the younger boys had never been to that part of the forest before, according to Carey. “It was really heartening to see how seriously they took it, especially the little kids. They were very ‘gung-ho’ and very excited about it,” he said. The weather for phase 7 was warmer than normal, so Carey’s crew was thankful for the water and shade at Beartrap Camp. “Even the little kids were wise enough to marvel at what a treat that was,” he said. Meanwhile, wildlife along the trail provided a show. “We saw a gopher snake consuming a kangaroo rat, which when you’re 10, 11 or 12 is fantastic stuff,” Carey said. The troop backpacked the entire Gene Marshall a few years ago. Carey said it’s best done as a three-day, two-night trip.

The trail is part of the Condor Trail, which will connect the southern and northern portions of the Los Padres. Conversation has already started about hiking the entire 400-mile route. “They have every intention of hiking the Condor Trail. I hope we’re able to organize it so that we’re the first Boy Scout troop to hike the Condor Trail in its entirety,” Carey said.

During the pandemic, Troop 111 had the boys afield as much as possible, stewarding the land, getting o their screens and shaking the quarantine blues. “I love that the boys feel invested in their public lands, and they take ownership of it by keeping them open,” Carey said. “They really, really love these sawyer projects.”

The saws came out again for phase 8 of the project, as LPFA spiked another trail crew for several days of work from Beartrap toward Haddock, using grant and private donation money.

Beartrap was base camp again for phase 9, a 10-day LPFA “Working Vacation” that began Memorial Day weekend and ran through June 6, working toward Haddock and Three Mile camps.

The work involved brushing, crosscut work to clear downed trees, tread work, including a couple of rock walls that needed to be built, and giving the trail camps some attention. At that point, approximately 75% of the trail was in good shape, with the remaining work to be done this fall or early in 2022, Conant said. To qualify as a National Recreation Trail, a trail must have special cultural, historic or scenic value. The Gene Marshall-Piedra Blanca Trail is one of the true jewels of the Los Padres, according to Conant. “It’s got a little bit of everything — pine trees, high elevation, south-facing chaparral, water in a lot of different sections, and some really neat history,” he said. During a LPFA Working Vacation, the organization provides all the food and tools, carried by pack stock, and helps coordinate all aspects of the project. Volunteers simply hike in with their personal belongings — tent, sleeping bag, clothes and other gear — while a designated cook prepares breakfast and dinner. Individuals put in anywhere from four to 10 hours per day over the course of three to 10 days. “It’s just great fun,” Conant said. “Everyone has a good time; it’s a great way to meet new people and stay involved with the forest and trail community. A lot of good friendships are created working on the trail.” After the project is completed early next year, the trail should be in good shape for the next five years, Conant said.

For more information and to volunteer for LPFA trail projects, email

This story is from:
Ojai Magazine Summer 2021
by Ojai Valley News