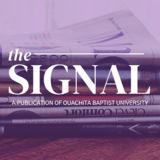 Nick Smith may not be the star of the show in any play or performance, but he does play a vital role in making any production that steps out onto Jones Performing Arts Center’s stage a success. Serving as OBU’s Technical Director and Production Manager, Smith has sacrificed many hours to ensure that one of Ouachita’s favorite traditions, Tiger Tunes, runs smoothly as faculty, alumni and families are eager to watch students perform after a long two years.

Smith oversees every aspect of audio, lighting and stage design that goes into each event in JPAC. He has been preparing for months behind the scenes to orchestrate all of the technical components of Tiger Tunes.

“Within each of those areas there are a lot of both small and big details that must be taken into consideration and properly executed to ensure a seamless show without hiccups, while also keeping everyone happy and safe on stage,” Smith said.

While it’s entertaining for the audience, Tiger Tunes is more than just singing and dancing, it’s a culmination of the countless hours that people like Smith have put in to make Tiger Tunes happen.

“Technical planning for Tiger Tunes begins as much as six months in advance when we begin planning the stage design and lighting,” Smith said. “Aside from planning well in advance, we spend several days setting up the rental lights and programming for all of the HoHo’s performances and for each club’s show. What most people probably don’t realize is that lighting is done only two days before our first full dress rehearsal and we spend approximately 30 hours programming lights over the course of those two days.”

Although Tiger Tunes is a busy season for Smith, he feels as though all of his time and effort is worthwhile when students finally get to bring their shows to life.

“One thing I most look forward to is the opening night of Tunes,” Smith said. “After the long weeks of setup and late night rehearsals, the best feeling is finally getting to see all of the hard work pay off as the show is performed in front of an audience for the first time.”

Smith is instrumental to the production of Tiger Tunes, but he would not be able to pull it off without the help and dedication of many student workers.

“My role is certainly not an individual effort,” Smith said. “The stage would not be set up and the show would not run seamlessly without the hard work of my JPAC work-study crew. They, too, give up a lot of their time to spend on setup and the performances, and they play a critical part in the show.”

Smith may spend a lot of time behind the stage and in the back of the auditorium, but he certainly enjoys it when he is able to act as an audience member, observing the fruits of his and others’ efforts.

“The most enjoyable part of Tunes is the energy in the room during a live performance; watching the clubs bring a high energy and engaging the audience,” Smith said.

“Technical planning for Tiger Tunes begins as much as six months in advance when we begin planning the stage design and lighting.” -Nick Smith