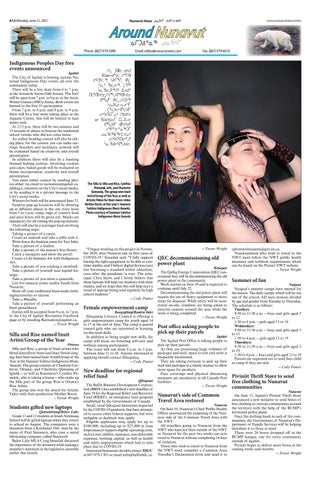 Iqaluit The City of Iqaluit is hosting various National Indigenous Day events all over the community today. There will be a free skate from 6 to 7 p.m. at the Arnaitok Arena (Old Arena). The Turf will be open from 7 p.m. to 8 p.m. at the Arctic Winter Games (AWG) Arena. Both events are limited to the first 25 participants. From 7 p.m. to 8 p.m. and 8 p.m. to 9 p.m. there will be a free swim taking place at the Aquatic Centre, this will be limited to lane swims only. At 2:15 p.m. there will be two minutes and 15 seconds of silence to honour the residential school victims who did not come home. An online beading contest will also be taking place, for the contest you can make earrings, bracelets and necklaces, artwork will be evaluated based on creativity and overall presentation. In addition there will also be a hunting themed baking contest, involving cookies and cakes, baked goods will be evaluated on theme incorporation, creativity and overall presentation. You enter either contest by sending photos either via email to recreation@iqaluit.ca, adding a comment on the City’s social media, or by sending it in a private message to the City’s social media. Winners for both will be announced June 23. Surprise pop-up locations will be showing up at different places in the city every hour from 1 to 5 p.m. today, bags of country food and juice boxes will be given out. Masks are mandatory for all visiting the pop-up stations. There will also be a scavenger hunt involving the following steps: Taking a picture of a raven; Create an inuksuk and take a selfie with it; Write down the Inukitut name for Tarr Inlet; Take a picture of a feather; Take a picture of the season’s first flower; Catch a mosquito and show the proof; Create a Life Imitates Art with Indigenous Art; Take a picture of you creating a snowball; Take a picture of yourself near Iqaluit kuunga; Take a picture of you in/on a qamutiik; List five musical artists and/or bands from Nunavut; Show off your traditional Inuit-made clothing/accessories or tattoos; Take a #Sealfie; Take a picture of yourself performing an Inuit game/dance. Entries will be accepted from 9 a.m. to 7 p.m. to the City of Iqaluit Recreation Facebook page or by emailing Recreation@iqaluit.ca. – Trevor Wright

Silla and Rise named Inuit Artist/Group of the Year

Ottawa Silla and Rise, a group of Inuit artists who blend dancefloor beats and Inuit throat-singing, have been named Inuit Artist/Group of the Year at the Summer Solstice Indigenous Music Awards. The group consists of Charlotte Carleton, Ottawa, and Charlotte Qamaniq of Iglulik – as well as Kimmirut’s Cynthia Pitsiulak, who is taking a hiatus – who make up the Silla part of the group. Rise is Ottawa’s Rise Ashen. The group also won the award for Artistic Video with their production Mother Roots. – Trevor Wright

Qamanittuaq/Baker Lake Grade 11 and 12 students at Jonah Amitnaaq School will be gifted laptops when they return to school in August. The computers were a donation from a Kitchener, Ont. man by the name of Paul Summers, who runs a metal fabricating company called Steelcraft. Baker Lake MLA Craig Simailak discussed the importance of the donation while making a member’s statement in the legislative assembly earlier this month.

“I began working on this project in November 2020, after Nunavut saw its first cases of COVID-19,” Simailak said. “I fully support having the right equipment to be able to continue studies, and I believe digital devices (are) fast becoming a standard within education, even after the pandemic is over. The principal, Chris Snow, and I firmly believe that these laptops will help our students with their studies, and we hope that this will help start a trend of laptops being used regularly by high school students.” – Cody Punter

Kangiqliniq/Rankin Inlet Ilitaqsiniq Literacy Council is offering a girls empowerment camp for youth aged 14 to 17 at the end of June. The camp is geared toward girls who are interested in learning on-the-land skills. In addition to being taught new skills, the camp will focus on fostering self-care and wellness among participants. The event will run from 9 a.m. to 3 p.m. between June 21 to 26. Anyone interested in applying should contact Ilitaqsiniq. – Cody Punter

Qikiqtani The Baffin Business Development Corporation (BBDC) has established a new deadline of June 30 for the Regional Relief and Recovery Fund (RRRF), an emergency loan program established by the Government of Canada. Small, rural Qikiqtani businesses impacted by the COVID-19 pandemic that have attempted to access other federal supports, but were ineligible or declined, may apply. Eligible applicants may apply for up to $100,000, including up to $25,000 in loan forgiveness,to support eligible operating costs, such as rent, utilities, insurance, non-deferrable expenses, working capital, as well as health and safety improvements which had to take place due to COVID-19. Interested businesses should contact BBDC at 867-979-1303 or email info@baffinbdc.ca.

Kinngait The Qulliq Energy Corporation (QEC) announced they will be decommissioning the old power plant in the community. Work started on June 10 and is expected to continue until July 22. Decommissioning the old power plant will require the use of heavy equipment to move items for disposal. While safety will be monitored on-site, residents are being asked to exercise caution around the area while the work is being completed. – Trevor Wright

Post office asking people to pick up their parcels

Iqaluit The Iqaluit Post Office is asking people to pick up their parcels. As they are processing large volumes of packages and mail, space to sort and store is frequently maximized. They are asking everyone to pick up their mail and packages in a timely manner to allow more space for products. Face coverings and physical distancing measures are mandatory in all Canada Post facilities. – Trevor Wright

cphotravelrequests@gov.nu.ca. Nunavummiut who wish to travel to the NWT must follow the NWT public health measures and isolation requirements which can be found on the Protect NWT website. – Trevor Wright

Nunavut On June 11, Iqaluit’s Piviniit Thrift Store announced a new initiative to send boxes of free clothing to various communities around the territory with the help of the RCMP’s territorial police plane. Once the clothing lands in each of the communities, the Government of Nunavut’s Department of Family Services will be helping distribute it to those in need. There were 24 boxes dropped off at the RCMP hangar, one for every community outside of Iqaluit. Piviniit hopes to deliver more boxes in the coming weeks and months. – Trevor Wright 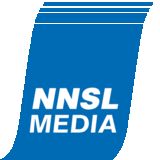