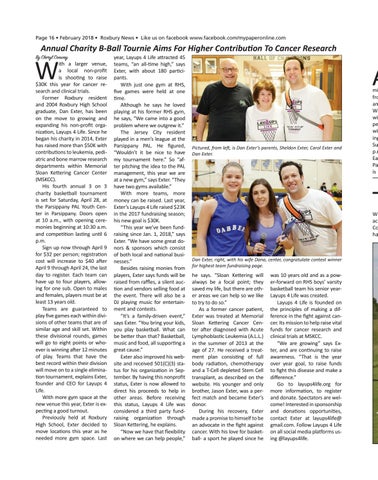 By Cheryl Conway ith a larger venue, a local non-profit is shooting to raise $30K this year for cancer research and clinical trials. Former Roxbury resident and 2004 Roxbury High School graduate, Dan Exter, has been on the move to growing and expanding his non-profit organization, Layups 4 Life. Since he began his charity in 2014, Exter has raised more than $50K with contributions to leukemia, pediatric and bone marrow research departments within Memorial Sloan Kettering Cancer Center (MSKCC). His fourth annual 3 on 3 charity basketball tournament is set for Saturday, April 28, at the Parsippany PAL Youth Center in Parsippany. Doors open at 10 a.m., with opening ceremonies beginning at 10:30 a.m. and competition lasting until 6 p.m. Sign up now through April 9 for $32 per person; registration cost will increase to $40 after April 9 through April 24, the last day to register. Each team can have up to four players, allowing for one sub. Open to males and females, players must be at least 13 years old. Teams are guaranteed to play five games each within divisions of other teams that are of similar age and skill set. Within these divisional rounds, games will go to eight points or whoever is winning after 12 minutes of play. Teams that have the best record within their division will move on to a single elimination tournament, explains Exter, founder and CEO for Layups 4 Life. With more gym space at the new venue this year, Exter is expecting a good turnout. Previously held at Roxbury High School, Exter decided to move locations this year as he needed more gym space. Last

year, Layups 4 Life attracted 45 teams, “an all-time high,” says Exter, with about 180 participants. With just one gym at RHS, five games were held at one time. Although he says he loved playing at his former RHS gym, he says, “We came into a good problem where we outgrew it.” The Jersey City resident played in a men’s league at the Parsippany PAL. He figured, “Wouldn’t it be nice to have my tournament here.” So “after pitching the idea to the PAL management, this year we are at a new gym,” says Exter. “They have two gyms available.” With more teams, more money can be raised. Last year, Exter’s Layups 4 Life raised $23K in the 2017 fundraising season; his new goal is $30K. “This year we’ve been fundraising since Jan. 1, 2018,” says Exter. “We have some great donors &amp; sponsors which consist of both local and national businesses.” Besides raising monies from players, Exter says funds will be raised from raffles, a silent auction and vendors selling food at the event. There will also be a DJ playing music for entertainment and contests. “It’s a family-driven event,” says Exter. “You bring your kids, you play basketball. What can be better than that? Basketball, music and food, all supporting a great cause.” Exter also improved his website and received 501(C)(3) status for his organization in September. By having this nonprofit status, Exter is now allowed to direct his proceeds to help in other areas. Before receiving this status, Layups 4 Life was considered a third party fundraising organization through Sloan Kettering, he explains. “Now we have that flexibility on where we can help people,”

he says. “Sloan Kettering will always be a focal point; they saved my life, but there are other areas we can help so we like to try to do so.” As a former cancer patient, Exter was treated at Memorial Sloan Kettering Cancer Center after diagnosed with Acute Lymphoblastic Leukemia (A.L.L.) in the summer of 2013 at the age of 27. He received a treatment plan consisting of full body radiation, chemotherapy and a T-Cell depleted Stem Cell transplant, as described on the website. His younger and only brother, Jason Exter, was a perfect match and became Exter’s donor. During his recovery, Exter made a promise to himself to be an advocate in the fight against cancer. With his love for basketball- a sport he played since he

was 10 years old and as a power-forward on RHS boys’ varsity basketball team his senior yearLayups 4 Life was created. Layups 4 Life is founded on the principles of making a difference in the fight against cancer. Its mission to help raise vital funds for cancer research and clinical trials at MSKCC. “We are growing” says Exter, and are continuing to raise awareness. “That is the year over year goal, to raise funds to fight this disease and make a difference.” Go to layups4life.org for more information, to register and donate. Spectators are welcome! Interested in sponsorship and donations opportunities, contact Exter at layups4life@ gmail.com. Follow Layups 4 Life on all social media platforms using @layups4life.