The growing appetite for alternative investments 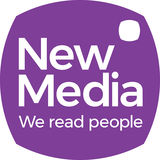 “We’re on a mission, as a business, to provide South Africans with an easily accessible way to invest in the global world of alternatives that, historically have only ever been available to the super-rich and institutional investors of the country,” says Dino Zuccollo, Global Head of Product Development and Distribution, at Westbrooke Alternative Asset Management.

“We believe that local investors are tired of vanilla investments – and they’re tired of returns in their traditional portfolios that often don’t meet their expectations,” he adds.

Westbrooke is probably best known for its Section 12J investment offering that allows investors a 100% tax incentive from their tax liability. “It’s a misconception that this is all that we do,” Zuccollo says. “In fact, it’s less than half of our aggregate business to this day.”

Regrettably, the Section 12J incentive, which became a R10bn industry, was canned by government when finance minister Tito Mboweni tabled his 2021 national Budget speech in parliament. The incentive will not be extended post the June 2021 sunset clause. Although Section 12J is now coming to

an end, the significant interest shown in the incentive has highlighted the desire on the part of South Africans to invest in something different. And the demise of Section 12J only serves to create an even larger gap to fill with new investment opportunities. “The rest of the products that we offer are on the same trajectory as the Section 12J incentive, and in time will be opened just as wide,” Zuccollo says.

Simply put, alternative investments are seen as those that do not fall into one of the traditional asset classes such as shares, bonds and cash.

“It’s very much in the conservative space of the world of alternatives that Westbrooke plays its part, where capital preservation is a focus for our clients. We like to play in that space because this type of investment fits well within traditional client portfolios, but the returns generated are uncorrelated to the traditional markets, thereby reducing risk and volatility,” Zuccollo explains.

Another advantage – although some might consider it to be a disadvantage – is that alternatives are generally ‘locked in’.

“They are illiquid and they require you to be invested for a period of time. If you look at what happens when traditional markets start to move downwards – investors panic and they sell and, more often than not, they sell when things are cheaper, and they buy when things are expensive. My point is that the ability to create liquidity on a daily basis doesn’t always generate the right behaviours. Holding alternative investments means you don’t necessarily have the ability to be rash with your decision making.” The vast majority of South Africans have never really had exposure to these types of investments because, frankly, Zuccollo says, there haven’t been enough access points for them to gain exposure to alternatives.

That’s where Westbrooke has a role to play. Founded in 2004, it presently has around R6bn in assets under management, with more than 1 500 clients invested in a variety of different funds based in SA, the UK and the US. Westbrooke’s business is split into four pillars.

“We invest in private debt that offers clients an alternative to fixed income, but at a much higher yield. We then have a business that invests in direct real estate,which for us is spread across student accommodation and hospitality in SA, last mile logistics in the UK, as well as multifamily residential property and mobile home parks in America – giving clients the opportunity to invest in direct real estate across the board,” says Zuccollo. “We also invest in private equity and venture capital across the three jurisdictions in which we operate.”

We believe that, before we launch a fund to third-party clients, we should first invest our own money into it for a period of time

Westbrooke recently launched the second tranche of its early-stage venture capital fund in the UK, which invests in early-stage technology companies alongside Errol Damelin, the Klerksdorp-born South African who founded online microlender Wonga. “Since stepping down as executive chairman of Wonga, Damelin has become a serial founder and angel investor and has been an early investor in names like the digital car business Cazoo, which launched at the end of 2018, and has already achieved unicorn status, 1 ”

Zuccollo adds. “We have some exciting new developments on the way in our venture capital cluster and are planning to raise an additional tranche of capital into the strategy, with more information to be communicated to clients in the second half of the year.”

It’s important, he believes, to note that alternative investments come with risk, as they are less transparent than traditional markets, and subject to less regulationthan the collective investment scheme or pension fund space. “These investments are not necessarily reported on as often, and it’s important to invest with someone of repute, someone with a long track record of successful performance in the industry – with shareholders of repute – that can be referenced. Potential investors must understand that those they are getting into bed with are honourable as well as skilled.”

He recommends that a thorough due diligence check be carried out on managers, with an extremely important consideration being how much of the manager’s own money will be invested in the fund alongside the investors’ money.

“We believe that, before we launch a fund to third-party clients, we should first invest our own money into it for a period of time,” he says. “Once we’ve got proof of concept and proof of the returns coming through, and proof that the tax structures we put in place work, then we’ll start to bring third-party money in; but only at that point in time.” Westbrooke has already received allocations from more than 70 wealth managers around the country. “We are very open to sitting down and speaking to managers in as much detail as they want,” Zuccollo says, adding that Westbrooke is aiming to bring new alternative asset classes to SA, as well as making those that have been around for a while more accessible by bringing clients in at lower minimum investment levels. In addition, Westbrooke will be launching its own portal in the second half of this year, enabling clients to invest directly.

‘Unicorn status’ is a term used in the venture capital industry to describe a privately held start-up company with a value of over $1bn. 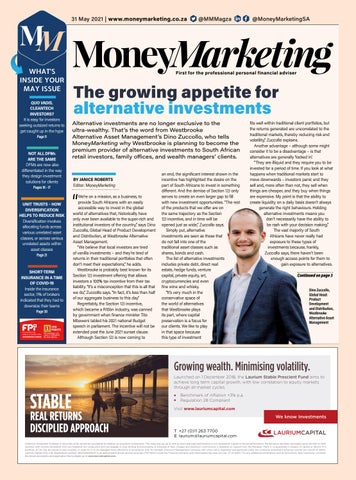