PRIDE IS MORE THAN A MONTH from Naropa Magazine 2022
by naropamagazine 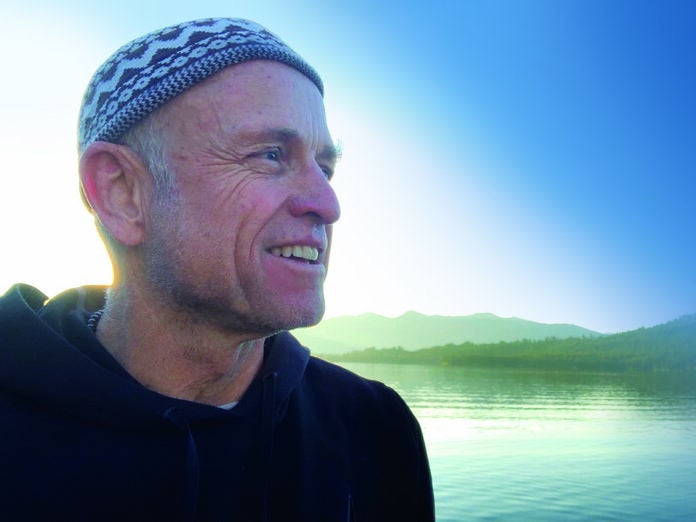 TYLER NORRIS: CHAIR OF THE NAR...

Love didn’t always win, but it has always had the power to transform. For Jonathan Kirkendall (MA Counseling Psychology, '94) and Scott Perkins (MA Buddhist Studies, '92), it did just that.

“We were at Naropa when Amendment 2 was passed,” recalls Kirkendall. “All of our friends told us that there’s no way it would, and then it did, overwhelmingly. And that was eye-opening for me about just sort of the bubble that Boulder was in. ”

In the early ‘90s, Aspen, Boulder, and Denver announced citywide policies that prohibited discrimination based on sexual orientation. This did not sit well with the socially conservative group Colorado for Family Values (CFV). CFV drafted and supported a statewide constitutional initiative, called Amendment 2, that would prohibit cities and institutions in Colorado from establishing antidiscrimination language for sexual orientation.

In the 1992 election, Colorado voters approved the amendment by a 53–47 percent margin. This passage meant “homosexuals living in Colorado were not protected from discrimination based on their sexual orientation.”

Prior to Naropa, Kirkendall had been working with Catholic workers for social teachings in Washington D.C. when he was brutally attacked. He discovered psychotherapy to recover from the trauma he endured. He saw an ad for Naropa, and at the time it was actively recruiting what was then the only ‘LGB’ for the psychotherapy department.

Meanwhile, after studying Buddhism in India, Perkins returned home to Michigan where he struggled to find a Buddhist community. Committed to his desire to help people deal with suffering, he chose Naropa because it recognized the value of contemplative practice, which was rare in the '90s.

After thirty years together, Kirkendall and Perkins’ love story has many chapters. They reflect fondly on the chapter of how they navigated the challenges of being in Naropa graduate programs during a time where they were under the constant worry and stress of the uncertainty around them.

Over time, the two would come to share their true feelings, including Perkins who boldly navigated coming out amidst all the uncertainty of his personal rights.

Kirkendall invited Perkins to go to Washington, D.C., with a group of their friends to join the March on Washington for Lesbian, Gay, and Bi Equal Rights and Liberation. On April 25, 1993, an estimated one million attended the march, making it one of the largest protests in American history.

“I was a student rep for the Presidential Search Committee for Naropa, and we were reporting to the board on our progress,” Perkins says “I managed to force an interjection in front of the board and with a shaky voice mentioned Amendment 2, and I said basically that I couldn't imagine attending a school that wouldn’t speak out against this. Had Jonathan not taken me to that march, I never would have known to do that.”

“It was a significant experience for me and my own comfortability and confidence in who I was, in general, and also as a gay person.”

Naropa did publish a statement coming out against Amendment 2 and clarified to the public that it strove to be an open and inclusive community. Together, Kirkendall and Perkins both credit Naropa with being a safe place to share their voices and learn how to speak their truth with courage and conviction.

Eventually, Amendment 2 was declared unconstitutional by the Supreme Court, but not without setting a precedent for the current struggle of LGBTQIA+ rights in the United States.

“I think one of the big things I’ve taken from Naropa is the confidence that if I get on the spot, I can relax and trust myself,” Perkins says. “All the battle is just putting myself on the spot.”

“Naropa enabled me to ask questions that I didn’t even know I had permission to ask,” Kirkendall adds. “My parents were Southern Baptist missionaries. There is very much a right and wrong about everything. But at Naropa, I could ask all the questions that I have. Naropa was really good at emphasizing that our curiosity has wisdom to it.”

“I remember my ‘on the spot’ situation in front of all my classmates. I raised my hand and said, 'So Amendment 2 has passed. It’s very detrimental to me and my community. I don’t want to be paired with an older person who may have voted for it.' I walked out of that class and the teacher’s assistant was with me. And I turned to him and I said to him, ’Is it okay that I asked that question?’“

“And he said, ‘You know, Jonathan, the deal with being a minority is that you feel like you have to ask permission to ask the questions to keep you safe.’ And he said, ‘You don’t have to do that here,’” Kirkendall says.

In 2006, Kirkendall began working with The Tragedy Assistance Program for survivors—a nonprofit that offers bereavement care to military families. Kirkendall was most recently issued an invitation to join the board of the Veteran’s Service Organization, an honor he is both proud and excited to receive.

“I would not be fearlessly jumping into work that I know so little about if it wasn’t for Naropa. But it’s because of Naropa, that I feel like I can walk into these places that I really know nothing about and start asking questions.”

“The most transformative thing Naropa provided me was the inspiration to shift my career path from academics to social service with a focus on alleviating suffering in the world. I am grateful for that. And it’s why I’m doing what I do now, and I really love what I’m doing,” says Perkins.

On June 26, 2015, Twenty-three years after Amendment 2 was reversed, the U.S. Supreme Court struck down all state bans on same-sex marriage, legalizing it in all fifty states.

“Scott said, ‘Should we do this thing? And go get married?’ And I said to him, ‘Look, dude, we’ve literally only been together for twenty-two years. What if it doesn’t work out?’”

This story is from:
Naropa Magazine 2022
by naropamagazine