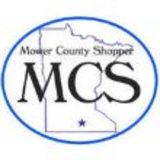 CHECK US OUT ON FACEBOOK - BECOME OUR FAN TODAY!!

The Mower County Shopper began in 1964, when an Austin resident and local merchants believed that Austin's trade area should be enlarged to enhance the continued growth of the town. The circulation of 5,000 copies were mailed to rural areas of South Central Minnesota and North Central Iowa.
The circulation has steadily increased, currently reaching over 18,000 homes.We publish only a Tuesday Shopper.