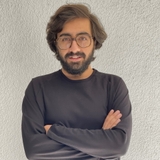 The First design studio project was defined as designing a village which is located on the north of the town of Lavasan. In this project we had to respond the function because the client was a lawyer who had his or her own referral and also this building should have its unique form.

The purest form is a cube and by moving an edge we could obtain a pure form and yet different.Unlike the simple form, circulation system designed in a complex way.

It can be said that most of the buildings which are known as residential, villas and so on, are suffered from lack of negative space, that undermines the integrity of the building’s views and unity. Practically, we cut the floors as a knife and divide it, therefore, suggested solution was the existence of a splitlevel with a central void to maintain both integrity and unity within the visibility cohesion and to

provide a negative space for the entrance to be accessed without having to enter the private area.Due to a steep slope of the site, there was a great effort to solve this problem with multiple elevationlevels and provided low stairs.

This story is from:
Undergraduate Architecture Portfolio | Winter 2019
by Mohamad Miri