Happy Hens at The Nesting Box

from Leader: Progress During a Pandemic
by MidAtlantic Farm Credit

from 'Leader: Progress During a Pandemic' 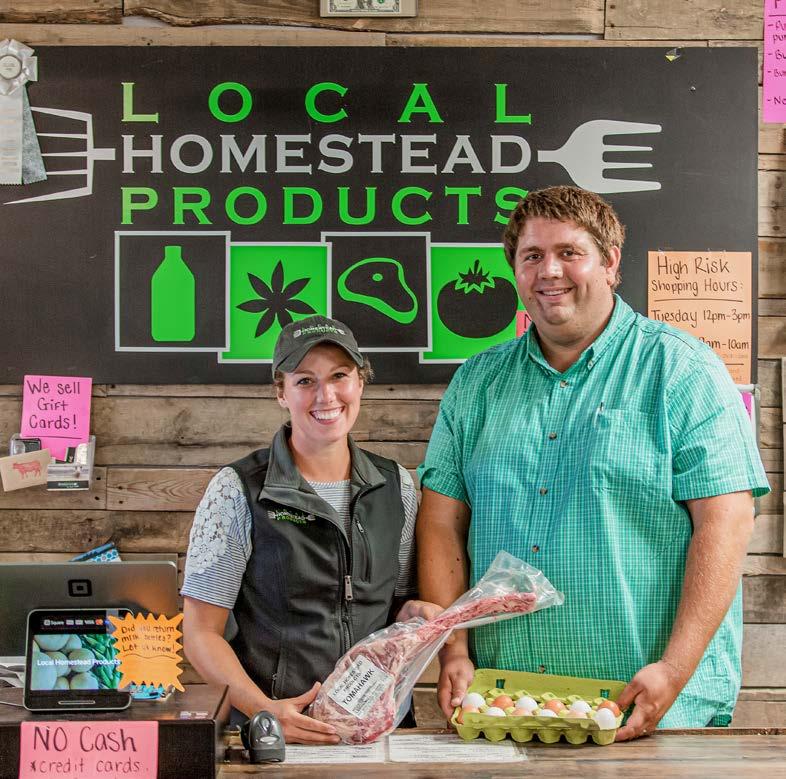 A Safe Haven for their Community

Timi and Keith Bauscher had a crazy idea during a snowstorm in 2016.

Story and photos by Sally Scholle

Although Keith had a successful firewood business and Timi was working off the farm, Timi wanted to stay home to raise their children. Timi already had a steady stream of customers for the eggs she was selling from Keith’s father’s farm, and wanted her own flock of laying hens.

Just two years later, with the help of Farm Credit loan officer Rachael Nishnick, that idea became reality with the opening of The Nesting Box in Kempton, Pennsylvania. In addition to fresh eggs from 1,700 free-range hens, Nesting Box customers can pick up milk, bread and other goods from eleven local farms. Timi also learned the basics of making ice cream, finetuned the process to create the texture they wanted, and added the sweet treat to the store’s year-round offerings.

Things changed quickly when COVID-19 hit and shutdowns became imminent. Like other farmers who rely on direct sales, Timi and Keith were faced with a nightmare: how to remain solvent and supply customers with food.

Timi says that in the few short days prior to the shutdown, she had no idea what she was going to do with perishable goods, both theirs and those of the other farmers supported by The Nesting Box. “The closing was announced on Thursday and we were going into the weekend,” says Timi. “I said ‘I guess we’re going to have to donate the perishables and whatever else we can and ride it out.’”

But what Timi predicted didn’t happen. Not only did people come to the store, The Nesting Box welcomed new customers. That Friday and over the weekend, Timi sold out of perishables as customers emptied the shelves. “We were going through 150 gallons of milk and more than 100 dozen eggs each day,” says Timi, adding that people were leaving the store with food by the armloads. “I was afraid the people who came to the store later wouldn’t get what they needed because everyone was panic-buying.”

After shutdowns started, The Nesting Box’s Facebook page went from 4,500 followers to 18,000 in a very short time. Timi quickly realized she’d have to limit purchases to ensure all customers would be able to purchase what they needed. She also realized that curbside service was essential.

“The initial challenge was not being set up for curbside delivery,” says Timi, adding that she had to also figure out how to handle online ordering. “We did a walk-through with Facebook videos, then customers messaged me with their list, we’d shop for them, take a picture of their order and send a follow-up email.”

“There was so much to think about. Everybody was looking for something to hang onto in the first month. But there was no time to think.”

Keith added that the process was timeconsuming, but well worth the effort to continue servicing their regular customers.

Timi was fielding 50 to 60 requests for curbside service each day, and continued to make ice cream as fast as she could to keep up with the demand. “There was so much to think about,” says Timi. “Everybody was looking for something to hang onto in the first month. But there was no time to think. If I thought too much, I’d explode, so it was a good distraction.”

While Timi was glad to be selling out every day, she learned that Josh Zimmerman, a nearby farmer with 80,000 laying hens, was forced to make a tough decision. Zimmerman’s market was bulk eggs for schools and restaurants, and when that market disappeared, there was nowhere to go with the 5,600 dozen eggs produced daily on his farm.

Without thinking twice, Timi made a Facebook post about the extra eggs they’d be offering to help the Zimmermans avoid having to depopulate chicken houses. In just 15 minutes, the post went viral. “All of the right people were there,” says Timi. “They knew animals were going to be euthanized, food banks were empty, grocery stores were out of eggs and people didn’t have money because the stimulus checks hadn’t arrived yet.”

As Timi recruited volunteers to wash and pack eggs, Keith set up the egg washer in their garage. Volunteers worked in shifts to wash, pack and stack pallets; 48 cases of 15 dozen eggs each. “We started selling a little before 10 am,” says Timi, “and in less than 15 minutes, we sold out that first day.” Although the minimum order was five dozen eggs, Keith says they often received orders, many from outside the immediate area, for as many as 2,700 dozen eggs at a time for food banks.

The mass egg distribution project was eventually moved to a community center, with drive-through lanes for ordering and pickup. Timi and her volunteers distributed eggs for six weeks — 35,000 dozen a week — and now Zimmerman is back to selling eggs through the regular channels.

Timi says many of her regular customers are young and have little or no knowledge about agriculture, but she’s happy to field questions. She has found that people are willing to pay a premium price for agricultural products if farmers demand what their products are worth.

“I’m old enough to remember snapping beans with grandma, but young enough to realize that the general population is two generations removed from agriculture,” says Timi. “Our kids know we don’t do anything until hay is made and the chickens are cared for.”

Check them out on Facebook @The-Nesting-Box-Farm-Market-Creamery or on Instagram @the_nesting_box.
This story is from:
Leader: Progress During a Pandemic
by MidAtlantic Farm Credit