from The Bridge 2020 | Maynooth Alumni Magazine

When the New York Supreme Court handed down a 23-year sentence to Hollywood producer Harvey Weinstein in March, it was one of the few stories that took top billing over the Covid-19 pandemic.

Just weeks before, a jury had found Weinstein guilty of the rape and sexual assault of two of the five women who testified against him. His legal team had pleaded leniency, citing pre-existing health issues and his “historic fall from grace.” But for all the women who had told their traumatic stories and faced down media publicity and a smear campaign by Weinstein’s lawyers, the severity of this sentence was of vital importance. One of those women, Monaghan native Laura Madden, expressed relief when she heard that Weinstein would spend 23 years behind bars. “It’s an incredible result for the women who so bravely took the stand,” she said. “It’s vindicating to see the justice system work in favour of Weinstein’s victims at last.” As the first woman to go on the record for a New York Times exposé by journalists Megan Twohey and Jodi Kantor, Madden’s role was pivotal in bringing to light the activities of Weinstein who for two decades had succeeded in silencing his accusers with nondisclosure agreements. Madden had travelled from her home in Wales to Maynooth University to address an International Women’s Day event just five days before the landmark sentence was handed down. Surrounded by her family and friends, she was awarded the President’s Medal 2020 for her courage in publicly speaking of Weinstein’s sexual predation. In conversation with RTÉ and BBC broadcaster Audrey Carville, Madden described a 22 year-old woman, setting out on an exciting career in the film industry; the devastation of Weinstein’s assault; and her crucial decision to speak out publicly over two decades later. “Something I have learnt since going public with my story is that you cannot fix a problem you cannot see. By shining a light on the collective experiences of women, a global reckoning has begun,” she said. On her response to seeing Weinstein finally brought to account, Madden, a former producer at Miramax said: “I’m not sure I have any strong desire for revenge, because my life has moved on. But I think that society needs to see harsh sentences for predators.”

“It was a watershed moment, to hear teenagers say their world is the same as the world I was growing up in.”

Carville asked about the toll it’s taken on her life: “I think it’s taken the last two years to really unravel what it did to my life. It certainly altered my career, it altered my confidence,” Madden explained. “I never believed that I had the right to work in that business, because I felt I got there through compromise. But now I feel I’ve had a chance to transform that feeling and see that it wasn’t something that I did wrong -- it was what he did to me that was wrong, and he should carry the shame.” Madden recalled the moment she decided to break her silence; when an employee of Weinstein phoned her to reminisce on their happy time at Miramax…and to dissuade her from talking to journalists. “I felt outrage, I felt that after 25 years that they believed I would be so easily manipulated. I felt ready to talk and to expose that predation. Nobody wants to have to tell their daughters that they were sexually assaulted. I was really nervous of telling them… but rather than being shocked and horrified, they threw their arms around me and said: ‘We’re so proud of you, you have to go on the record and stand up and change things, because these abuses still exist and they’re not going away..’ “It was a watershed moment, to hear teenagers say that their world is the same as the world I was growing up in. It made it clear that I did have a role to play, and it was defining.” To borrow a phrase from Nora Ephron, after years of self-doubt Laura Madden had become the heroine of her own life, not the victim. Prof Linda Connolly, Director of Maynooth University Social Sciences Institute (MUSSI), participated in the panel discussion, detailing the cultural and political context of both women’s silence and testimony through history. Dr Anne O’Brien, lecturer in Media Studies at MU, discussed research in her book, Women, Inequality and Media Work. Awarding the President’s medal, Prof Philip Nolan said: “Ms Madden is an extraordinary woman who bravely decided to speak about her trauma despite facing a tremendous headwind of pressure, power, and potential retribution. Her display of courage helped shed light on industries in which overwhelming imbalances of power are exploited to perpetrate and cover up acts of violence. She, along with other women who came forward, ignited a broader global movement, inspiring women around the world to publicly share their stories under the hashtag #MeToo.” 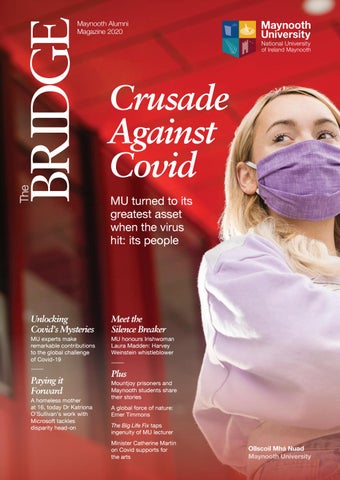